Myanmar morning news for May 22 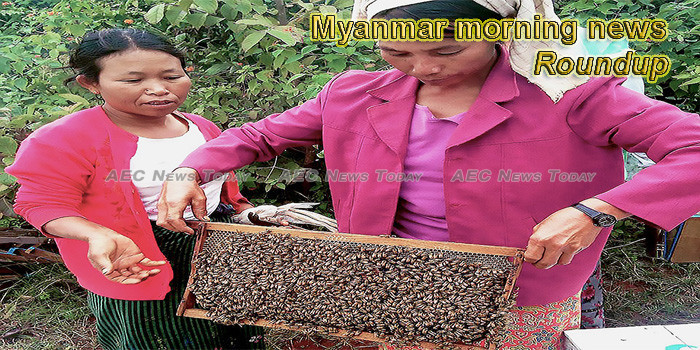 Parliament approves US$749m Japan loan for Yangon, Mandalay
The Pyidaungsu Hluttaw (Assembly of the Union) has approved a ¥82.27 billion (US$748.5 million) loan for urban development projects in Yangon and Mandalay.
— Myanmar Times

Tax on mobile phones kicks in June 1
Starting June 1, a five percent commercial tax on mobile phones and accessories shall be collected from buyers at the time of purchase and the relevant tax stamps affixed to the receipts in accordance with the Commercial Tax Law, the Internal Revenue Department (IRD) announced earlier this month.
— Myanmar Times

Myanmar launches big raising
MYANMAR Metals has launched a A$30 million equity raising in order to advance its 51%-owned Bawdwin project to a decision to mine by the second quarter of next year.
— Mining news

Ooredoo Myanmar appoints Airtel’s Sethi as CEO
Ooredoo Myanmar has appointed Rajeev Sethi as its CEO. He succeeds Vikram Sinha, who will continue to serve as a member of the board of directors of Ooredoo Myanmar. Sethi was most recently chief commercial officer of Airtel Africa, where he was responsible for the 15 countries within the Airtel African Region. Sethi previously served as CEO of Bangladeshi operator Grameenphone where.
— Telecompaper

Where to send your mother in law in Myanmar?
Think of yourself as an expat in Yangon and are leading an interesting lifestyle that keeps you busy with work, sports, social networking and a bit of travel in the region. Then your curious friends and family want to know where you live, what you’re doing in Myanmar and have booked their flights to Yangon.
— Myanmore

Myanmar seeks to shun Bitcoin craze
Myanmar’s central bank is seeking to shun Bitcoin as cryptocurrency adoption grows at a fast pace, concerned about how it might negatively affect the existing banking system, according to a report 20 May in Bitcoin Exchange Guide.
— Mizzima

Meeting held on mechanism for resolving complaints on forced labour
In a step towards the elimination of forced labour, the Labour Affairs Cooperation Work Committee’s High Level Working Group held a coordination meeting yesterday in Nay Pyi Taw to set down processes for addressing complaints before the National Complaints Mechanism.
— The Global New Light of Myanmar

Pope issues new warning against fake news
Pope Francis has urged journalists to desist from publishing fake news, saying it could cause harm, and instead “take time to understand” issues before reporting on them.
— Mizzima

Police in Myanmar Raid Village, Arrest Residents For Protest Against Cement Plant
Police on Tuesday raided a village in central Myanmar’s Mandalay region and arrested 13 residents along with a reporter for allegedly participating in a protest that turned violent against the Chinese operators of a coal-powered cement factory, a community resident said.
— Radio Free Asia

Int’l Food, Hotel Expo To Be Held In Myanmar
An international food and hotel expo is scheduled to take place in Myanmar’s commercial city of Yangon in June, aimed at developing the country’s tourism industry, according to the organizer Tuesday.
— Urdupoint

Myanmar, Mozambique sign Memorandum of Understanding (MOU) of sharing source code
A Memorandum of Understanding over permitting Mozambican Ministry of Industry and Trade to copy the source code of Myanmar website, National Trade Portal and Trade Repository Website was signed yesterday afternoon at the meeting hall of Ministry of Commence in Nay Pyi Taw.
— The Global New Light of Myanmar

Mandalay Police Officer Seriously Injured in Landmine Training
A military trainer mistakenly used a real landmine instead of a sample during a training session conducted for Mandalay Region police.
— Irrawaddy

Myanmar’s political prisoners struggle with life after jail
In 2013, after spending more than eight years in jail for owning an independent newspaper during the military government’s decades-long rule in Myanmar, Sonny Swe was granted his freedom in a prisoner amnesty.
— Aljazeera

Making Yangon a green city
As Myanmar develops and urbanises, buildings, roads and bridges that meet international standards alone will not do. It is also important to systematically grow and preserve trees and green spaces in the city.
— Myanmar Times

Forex reserve levels appropriate: Central Bank
Myanmar’s foreign exchange reserves are currently at an appropriate level, U Soe Thein, vice governor of the Central Bank of Myanmar (CBM) said on May 17. He did not disclose the exact amount of the reserves, saying that the Central Bank only reveals whether levels have increased or decreased.
— Myanmar Times

Taste for Western diet reshapes trade in Myanmar
THE arrival of a large cargo of American wheat at Myanmar’s newly opened port signals its leap into the global grain trade as the country’s demand for Western food rises.
— Business Times

Singapore overtakes China on Myanmar FDI list
Singapore has topped the list of foreign investment countries, overtaking China which once was the top investor in Myanmar, according to the Myanmar Investment Commission (MIC).
— Eleven Myanmar

Uphill struggle for ethnic women in peace talks participation
Women from ethnic minorities face an uphill battle to scale up their participation in ethnic political parties as well as in the peace process, a recent study reveals.
— Myanmar Times

YC-backed dahmakan raises US$5M to roll out its chef-cooked food delivery in Thailand, Malaysia
By vertically integrating the entire value chain from food production to delivery, its mission is to make food delivery affordable for office workers dahmakan, a Y-Combinator-backed cloud kitchen startup in Malaysia, today announced the closing of over US$5 million in Series A round of funding with.
— e27

New UK-Myanmar distance learning unit opened at Yangon University
The 3rd Residential School by TIDE (Transformation by Innovation in Distance Education) held an opening ceremony at the Scientific Research Building of Yangon University on 20 May, according to the New Global Light of Myanmar.
— Mizzima