Myanmar morning news for May 17 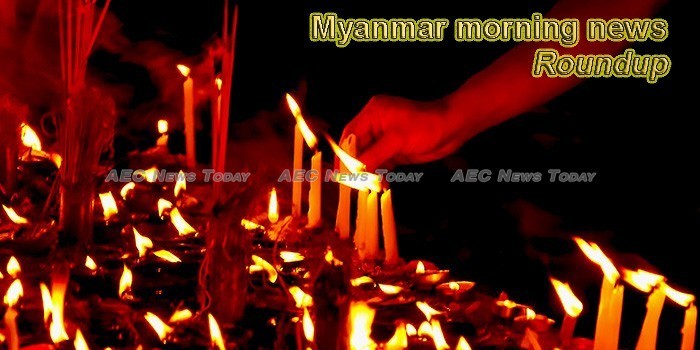 UN wants to put squeeze on Myanmar military
A United Nations mission has called on the international community to cut off all financial and other support to Myanmar’s military.
— UCA News

A clean-up campaign for Yangon’s air pollution
Knowledge is power and a group of students has built its own air quality monitor as part of a project to raise awareness about the dangers of particulate matter pollution.
— Frontier Myanmar

University students take next step with ride-sharing app
Four tech-savvy students from universities in Yangon put their heads together to develop Lan Kyone, a ride-sharing application that helped students hitch rides to get to school on time. Now, the Lan Kyone app is being modified, upgraded and expanded for commercial ride-sharing.
— Myanmar Times

Ambassador of France in Myanmar makes second visit to Ayeyarwady Region
For his second visit to Ayeyarwady Region, H.E. Christian Lechervy, Ambassador of France in Myanmar is leading a follow-up economic delegation composed of 3 institutions and 9 French companies on May 16 and 17, 2019, according to an official statement.
— Mizzima

Relative Stability Brings Progress to Myanmar Region
Loud explosions and billowing smoke filled the air above the national stadium in the highly militarized capital of Panghsang in Myanmar’s Shan state — but it wasn’t what one might expect in a region known for its heavily armed troops.
— Reliefweb

Baht set to rise until end of month
The upside gain for the baht, Asia’s strongest performing currency this year, is limited after rallying since the beginning of this month, propelled by the escalating trade tension between the US and China, says a senior official at Kasikornbank (KBank).
— Myanmar Times

Parliament Approves $40M French Loan to Upgrade Hydropower Plants
The loan, approved amid nationwide blackouts caused by power insufficiencies, is to be used to upgrade five hydropower plants to generate a combined capacity of 646,000 megawatts.
— Irrawaddy

Myanmar Authorities Expand MWEA’S Wings
Myanmar will set up a Women’s Entrepreneurship Development Center geared toward serving to women take up entrepreneurship and develop the caliber of women who’re confined to their homes, based on the Myanmar Women Entrepreneurs’ Association (MWEA).
— Denvernewspress

‘Northeast rebels plan attack after Myanmar crackdown’
Hit by Myanmar Army’s recent crackdown on their hideouts, militant groups in the Northeast are desperate to carry out attacks to make their existence felt, security officials in Assam claimed on Thursday.
— Deccanherald

Four Myanmar men confess to murder of friend
Four Myanmar workers caught for allegedly stabbing their compatriot to death in this central province last week have confessed, claiming to have committed the crime in a fit of anger after the.
— Bangkok Post

600 million kyats worth of drugs seized in Shan State
A large amount of narcotics worth 600 million kyats (400,000 U.S. dollars) have been seized in Myanmar’s Shan state, the Central Committee for Drug Abuse Control (CCDAC) said on Tuesday.
— Mizzima

Rolling blackout to continue until end of May: minister
The frequent power outages happening across Myanmar currently are due to electricity load reduction and the Ministry of Electricity and Energy says this will continue until the end of May.
— Myanmar Times

Centara Hotels moves into Myanmar with six property deal
Centara Hotels & Resorts and KMA Hotels Group have signed a memorandum of understanding to begin the development and renovation of six hotels across Myanmar.
— Breaking travel News