Myanmar morning news for May 10 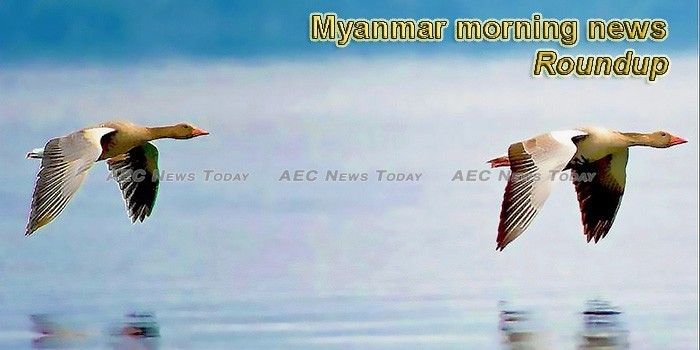 Trade deficit shrinks to $700 mln as imports decline
A fall in imports in the past seven months of the fiscal year has helped narrow Myanmar’s trade deficit to US$700 million, a significant drop from a deficit of $2.4 billion registered in the corresponding period of the 2017-2018 FY, according to data from the Ministry of Commerce.
— Global Newlight of Myanmar

Myanmar’s Central Bank warns against cryptocurrency use
The Central Bank of Myanmar has joined the view of many central banks across the globe that see cryptocurrency as a risky investment that should be avoided at all cost, according to industry website coingeek.
— Mizzima

Ring road construction to start in July: commerce ministry
Phase one of the proposed Yangon elevated highway will begin construction in July 2020, according to the Ministry of Construction (MOC).
— Myanmar Times

New Terminal Construction to Begin with Port Traffic Expected to Rise
Infrastructure builder Adani Myanmar has been granted permission from the MIC to begin the first of two phases of construction on a $290 million port in Yangon.
— Irrawaddy

35 more detainees suspected of linking with insurgent groups freed in Myanmar
Thirty-five more detainees, suspected of linking with an ethnic insurgent group, the Arakan Army (AA), have been freed after they were found not in connection with the group, said a release of the Office of the Commander-in-Chief of the Defense Services late Wednesday.
— Xinhua

Myanmar, Mekong Region countries discuss M&E on resistance to antibiotics
Organized by the National Health Laboratory Department under the Department of Medical Services, Ministry of Health and Sports, Myanmar is hosting the Workshop on Monitoring the Resistance to Antibiotics and Performing Research in the Mekong Region.
— The Global New Light of Myanmar

Opposition to Myitsone Dam Will Be Outgoing Chinese Ambassador’s Chief Legacy
YANGON–It has been a busy week for the Chinese ambassador to Myanmar. Just a week after Beijing hosted the 2nd Belt and Road (BRI) forum, Hong Liang has been bustling around the government offices in Naypyitaw attending a series of meetings since Monday.
— Irrawaddy

Mytel in the lead despite recent start
According to a report by Opensignal, recently launched telecom operator Mytel has trumped over its competitors in some categories despite its relatively short time entering Myanmar’s fledgling mobile broadband market.
— Eleven Myanmar

Gov’t Weighs Legal Action against Monk for Speeches Attacking State Counselor
The government is considering taking legal action against ultra-nationalist monk U Wirathu over his recent speeches in Yangon and Tanintharyi’s Myeik.
— Irrawaddy

After the Sri Lanka bombings: why Myanmar won’t be next
Despite government concern and suspicion in the wake of deadly terror attacks in Sri Lanka, Myanmar is not a likely target for Islamic extremism.
— Frontier Myanmar

4 shot dead in Myanmar prison riot
Police in Myanmar shot down at least four inmates and injured several others during a prison riot late Wednesday, an official said on Thursday.
— AA

Myanmar morning news for May 15