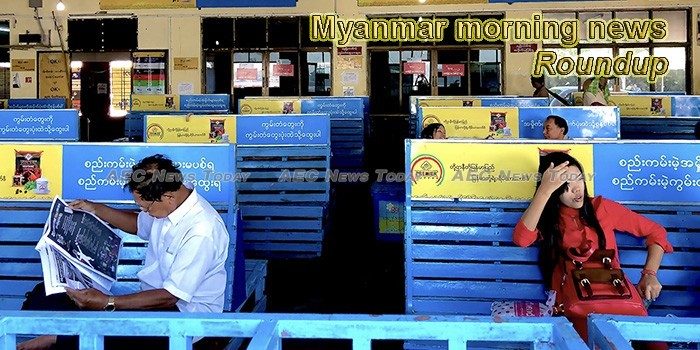 KNM active, up 5.26% after unit gets EPCC job in Myanmar
KNM Group Bhd rose 5.26% in active trade this morning after its unit has secured an engineering, procurement and construction contract worth US$24.87 million (approximately RM101.35 million) for a liquefied petroleum gas (LPG) facility in Myanmar.
— The Edge Markets

Eye on G-to-G pacts, MRF to register rice exporters
In order to expand the rice export market through government-to-government (G to G) agreements, the authorities will now require rice exporters in the country to register with the Myanmar Rice Federation (MRF).
— Global Newlight of Myanmar

Trade and Investment Project launched to boost business ecosystem
The Ministry of Commerce and the International Trade Centre launched the Myanmar Trade and Investment Project (TIP) in Yangon yesterday, with the aim of supporting the joint efforts made by public and private sector partners to strengthen the country’s role in the Asian economic ecosystem.
— Global Newlight of Myanmar

Myanmar launches trade, investment project with UK support
The Ministry of Commerce together with the Directorate of Investment Administration (DICA) and the International Trade Center (ITC) launched the Trade and Investment Project (TIP) on Monday with the aim of boosting Myanmar’s business ecosystem by improving trade and investments.
— Myanmar Times

A Distortion of Reality: Drugs, Conflict and the UNODC’s 2018 Myanmar Opium Survey
The recently-released “Myanmar Opium Survey 2018” by the United Nations Office on Drugs and Crime (UNODC) entails specific accusations against several of the conflict actors. This commentary explains how this further distorts, rather than reflects, the complex realities in Myanmar.
— TNI

Pyithu Hluttaw discuss arrest of accomplices in drug trafficking cases, greening project, rule of law
The 20th meeting of the 11th regular session of the Second Pyithu Hluttaw was held at the Pyithu Hluttaw building in Nay Pyi Taw yesterday. During the meeting, a question and answer session was held, a motion was tabled, and a bill was approved.
— Global Newlight of Myanmar

LaeLar start-up offers online classes at affordable prices
The job market is becoming more competitive and challenging. It is difficult to get a senior-level position with just a single degree.
— Myanmar Times

Huawei Myanmar calls for govt to facilitate change
DESPITE being caught in the trade war between China and the United States, Chinese giant Huawei Technologies Co remains confident of continued healthy growth in Myanmar thanks to the rising demand from locals, Liman Zhang, chief executive of Huawei Myanmar, said.
— The Nation (very annoying popup)

Myanmar destroys confiscated ivory, opens elephant museum
Confiscated ivory and other animal parts are displayed before being destroyed during a ceremony to mark World Wildlife Day at Yangon Zoological Gardens in Yangon, Myanmar on Sunday.
— euronews

Life insurers eyeing untapped Myanmar market
Several Japanese insurance firms are preparing to do business in Myanmar. The rapidly developing country has a population of over 50 million and a relatively untapped life-insurance market.
— NHK World

Ooredoo Champions Digital Inclusion in Myanmar to Benefit Millions of People
Ooredoo, one of the world’s leading ICT providers, is bringing the immense benefits of digital technology to millions of previously unconnected people in Myanmar through its cutting-edge Supernet, innovative apps, and partnerships with public and private organisations, in line with the GSMA’s commitment to deliver digital inclusion for all.
— Zawya

Thai steel maker to compensate nearly 300 Myanmar workers
MM Times quoted Myanmar Labour Attaché’s Office in Bangkok as saying that Thailand’s Chow Steel Industrial Plc will compensate nearly 300 Myanmar migrant workers that it laid off recently. The office said the Thai company will have to pay baht 12 million (USD 380,890) to the 292 migrant workers it laid off after it stopped operations for renovations to its facility.
— Steelgura

Chola Temple photos on show in Yangon
As part of the celebrating India’s cultural heritage in Myanmar, “An Exhibition of Archival Photographs of the Chola Temples of India” was being organized by the Embassy of India, Yangon with the support of the Ministry of Culture, Government of India, in association with the Centre for Art & Archaeology, American Institute of Indian Studies (AIIS), India and the National Museum, Yangon.
— Mizzima

OIC okays legal action against Myanmar at ICJ
In a major diplomatic breakthrough, the Organization of Islamic Cooperation (OIC) has unanimously adopted a resolution to move at the International Court of Justice (ICJ) for establishing the legal rights of Rohingyas and addressing the question of accountability and justice.
— UNB

Myanmar ups efforts to save marine, wildlife
“Life below water: for people and planet” was the theme of World Wildlife Day 2019, which was celebrated on Sunday to raise awareness about the world’s wild animals and plants.
— Myanmar Times

‘Rescued’ Myanmar Army Man Returns
At a flag meeting on Sunday, Border Guard Bangladesh authorities handed over the Myanmar military solider employed with their Border Guard Police 38 days after he was rescued inside Bangladesh territory.
— The Irrawaddy