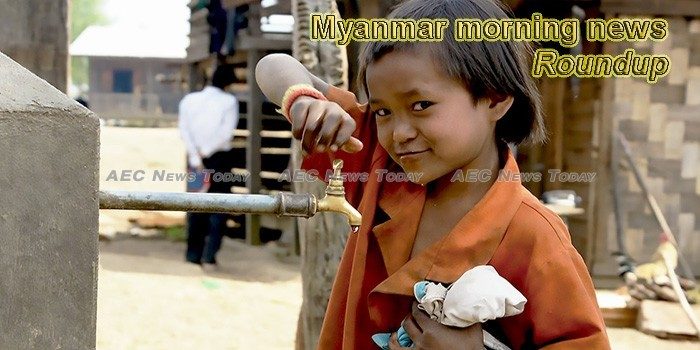 China’s gender gap sees young women from Myanmar sold as brides into sexual slavery
Seng Moon was 16 when she was trafficked from Myanmar’s Kachin State to south-western China and sold to a Chinese family as a bride.
— ABC

Senators ask US to sanction Myanmar army chief
Senators called Wednesday for the United States to slap sanctions on Myanmar’s army chief, saying more needed to be done to bring accountability over the campaign against the Rohingya.
— Frontier Myanmar

Myanmar Repatriates Bangladeshi Nationals Arrested 9 Years Ago
Myanmar on Wednesday handed back four Bangladeshi nationals arrested nine-and-a-half years ago for entering Myanmar waters illegally while fishing the Naff River, which defines part of the border between the two countries.
— The Irrawaddy

8 hurt in Myanmar riot
Fighting between Myanmar’s military and ethnic Rakhine rebels in Mrauk U, the ancient capital of the Rakhine kingdom, has left at least eight locals injured, scaring tourists and sparking fears that the historical monuments are under threat.
— Manila Times

Myanmar Digest: Yoma loan for Kargo; AsiaCarGroup sets up local platform
Myanmar-based Kargo, an online platform that connects truck owners with businesses and individuals, has secured a $130,000 loan from Yoma Bank while Australia’s AsiaCarGroup has activated a Myanmar platform for trading of cars.
— DealStreetAsia

5 hotels near Myanmar’s Inle Lake that you’ll want to escape to
THE majestic Inle Lake is one of the hottest up-and-coming destinations in Southeast Asia, and its mesmerising views are no joke.
— August Man

Legislature beefs up consumer protections
The Pyidaungsu Hluttaw (Assembly of the Union) passed amendments to improve consumer rights in the country on Friday.
— Myanmar Times

Japan’s involvement in Myanmar
After the civilian-democratic transition in Myanmar, the western sanctions on trade and investment in the country were lifted. This led to a huge inflow of foreign direct investment in key infrastructural sectors and energy sector because of the nascent stage of economic progress in the conflict-torn country.
— Modern Diplomacy

Amendment committee to adjourn for Thingyan
The Pyidaungsu Hluttaw’s (Assembly of the Union) Joint Committee to Amend the Constitution has finished its deliberation of Chapter 4 of the charter and will recess for one month for the Thingyan holidays, a spokesman for the panel said.
— Myanmar Times

Shining a Light on Shady Business in Myanmar’s Extractive Industries
The global debate on the discloser of beneficial ownership, especially in the extractive industries, is scaling up. More access to information about who really benefits from the revenues is raising accountability and helping in the fight against corruption.
— The Irrawaddy

Microsoft eyes rapid growth in Myanmar
DRIVEN by the need for digital transformation in both public and private sectors in Myanmar, Microsoft Corporation, a US technology giant, is confident of rapid growth in the country, according to Sonia Bashir Kabir, managing director of Microsoft for Bangladesh, Myanmar, Nepal, Bhutan and Laos.
— The Nation (very annoying popup)

Gov’t Compromises for Aung San Statue Rejected by Activists
At a meeting held between the government and rights activists who have been fighting against the installing of a bronze statue of Gen. Aung San, the Karenni Chief Minister L Phaung Sho proposed two points of compromise as possible solutions to the activists’ dispute.
— The Irrawaddy

Myanmar: Bananas, Brides And Bad Neighbors
A major project for the army in 2019 is to eliminate tribal rebel units from areas in Shan and Rakine states where China will be working on its CMEC (China-Myanmar Economic Corridor).
— Strategy page

Former Blackwater contractor in Myanmar security venture
A security firm with former US military contractor Mr Erik Prince on its board has moved into Myanmar to provide protection services for international investors, the company told AFP, as it weathers backlash to revelations over planned work in China’s restive Xinjiang region.
— Frontier Myanmar

Vietnamese naval ship leaves for LIMA 2019, Myanmar visit
Naval ship HQ 012-Ly Thai To of Brigade 162 of the Naval Region 4 on March 20 left for Malaysia to attend the 2019 Langkawi International Maritime and Aerospace Exhibition (LIMA 2019), which will take place on March 26-30.
— VietnamPlus

Myanmar military’s massacre denial complex
“Trust us.” That’s the implicit message in the Myanmar military’s announcement this week of the creation of an “investigation court” to probe the state-backed mass violence targeted at the country’s Muslim Rohingya population in August 2017.
— Asia Times

Myanmar to go 5G in 2-3 years
Myanmar will be ready to deploy 5G technology in 2-3 years, U Soe Thein of the Communications and Information Technology Ministry told the 2019 Mobile World Congress in Barcelona, Spain, last month.
— Myanmar Times

Solar energy startup SolarHome secures additional US$1M from Trirec
SolarHome, a solar energy startup that focusses on serving households in Myanmar, has announced that it has secured another US$1 million for equity from Trirec, an investment company that supports energy tech companies.
— e27

Telenor Myanmar extends non-stop roaming to Malaysia, Singapore
Telenor Myanmar has expanded its unlimited international data roaming service to Malaysia and Singapore, one month after the launch of the new service in Thailand.
— Retail News