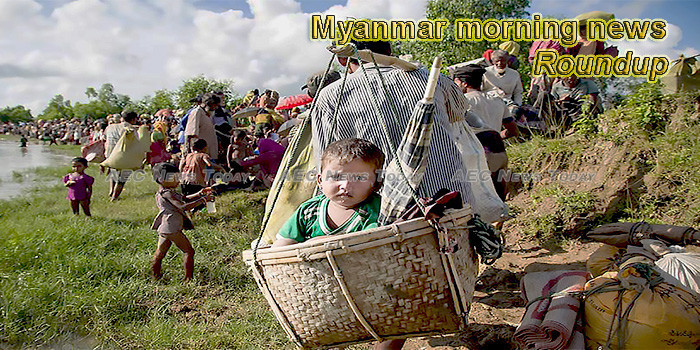 ASEAN urged to avoid complicity in Rohingya crisis
The plight of the Rohingya is likely to cast a long shadow over the upcoming ASEAN Summit in Thailand this week, as regional leaders are urged not to become complicit in what rights groups call a proposal for forced or premature repatriation.
— The Jakarta Post

Tech start-up offers solution for medical record-keeping
Most health clinics in Myanmar are dependent on medical records books, which are easily lost or misplaced by patients.
— Myanmar Times

Myanmar’s Growth Momentum Continues with Policy Reforms
The bi-annual Myanmar Economic Monitor June 2019, released by the World Bank recently paints an optimistic scenario of overcoming the volatility experienced by the country’s economy in 2018. With growth becoming broad-based in terms of the revival of industrial and service sectors, Myanmar is projected to grow at the rate of 6.5% in FY 2019.
— Mizzima

IRD collects over Ks 4090 billion in tax revenue this FY
Till May of this fiscal year, Internal Revenue Department (IRD) has collected a total tax revenue of Ks 4090.709 billion, accounting for 65.98 per cent.
— Eleven Myanmar

To Electrify Myanmar, Build The Grid From The Outside In
Kin Cho has been selling bottled petrol to passing motorists in central Myanmar for over a decade. Each liter costs roughly $1, and she sells about four on a good day. Now that her village is hooked up to reliable electricity, she bought an electric fuel dispenser.
— Forbes

Three firms with unpaid loans under previous Shan State government
The former Shan State government provided K5.6 billion in loans to three private firms from fiscal 2011-12 to 2015-16, and the amount has since risen to K7.5 billion because of interest, according to the state auditor general.
— Myanmar Times

ASEAN leaders told to get serious on repatriation issue
Southeast Asian leaders must use an upcoming summit to hold unvarnished talks on Myanmar’s treatment of the Rohingya, rights groups urged Wednesday, after a report by the bloc was pilloried for whitewashing the persecution of the Muslim minority.
— Mizzima

Speaker U T Khun Myat leaves for Thailand to attend AIPA preparatory meeting for ASEAN-AIPA leaders’ Interface
A delegation led by U T Khun Myat, Speaker of Pyidaungsu Hluttaw and Pyithu Hluttaw, left Yangon for Thailand to attend the preparatory meeting of the Association of Southeast Asian Nations Inter-Parliamentary Assembly-AIPA and AIPA- ASEAN Interface from 21 to 23 June ahead of ASEAN Summit in Bangkok.
— The Global New Light of Myanmar

Maha Bawga reveals plans to list on local bourse
Maha Bawga Finance Co is in the process of changing its status to a public company in preparation for a listing on the Yangon Stock Exchange (YSX), Daw Pan Pa Pa, financial controller to the company, told The Myanmar Times.
— Myanmar Times

A Rocky Start for U.S.-Japan Cooperation in Myanmar
Myanmar is proving to be a major test of strategic economic cooperation between the United States and Japan – one which reveals wider foreign policy differences between the allied nations. Those differences make substantial collaboration towards realizing a “free and open Indo-Pacific” (FOIP) in specific countries difficult, despite joint strategic interests and aligned high-level political visions.
— Tokyo Review