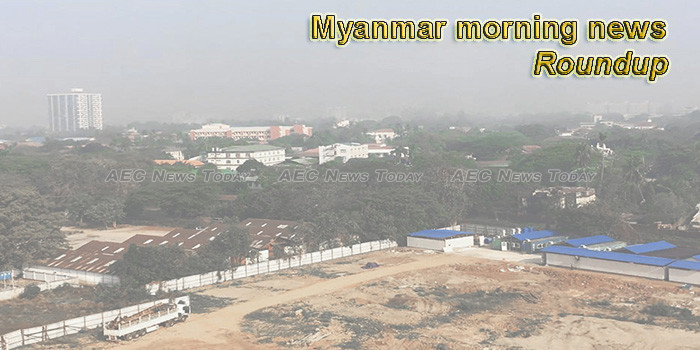 Satellite images show Myanmar’s ‘minimal preparations’ for Rohingya return: think-tank
Myanmar has made “minimal” preparations for the return of hundreds of thousands of Rohingya Muslim refugees sheltering in neighboring Bangladesh, according to an Australian think-tank, despite the country saying it is ready to start repatriation.
— Reuters

Myanmar to pick deep-sea port location next year
The location for Myanmar’s first deep-sea port will be decided next year, according to a senior government official.
— Myanmar Times

Myanmar invites foreign investment in microfinance
In response to growing investors’ interest in Myanmar’s finance sector amid on-going market liberalisation, key players in the microfinance industry gathered on Tuesday at an event in Yangon, the nation’s hub of commerce.
— Eleven Myanmar

AA/ULA welcomes Chinese investment in Rakhine
The Arakan Army (AA)/United League of Arakan (ULA), has said it welcomes foreign investors, including Chinese investment in large-scale infrastructure projects under the Belt and Road Initiative (BRI), in western Myanmar’s underdeveloped Rakhine state, where it is fighting the national military for greater autonomy and self-determination, RFA reported.
— Mizzima

Resettlement programmes discussed for displaced persons in Kachin State
Dr Win Myat Aye, the Union Minister for Social Welfare, Relief and Resettlement, attended the discussion yesterday morning between the government bodies and the Kachin Humanitarian Concern Committee to collaborate in resettlement programmes for the displaced persons in Kachin State.
— The Global New Light of Myanmar

Peninsula Hotel Shareholder Eyes $1.6-Billion Project in Rakhine
State govt has yet to release details of the project, which would be developed jointly by Singapore’s Huacheng and a Chinese firm.
— Irrawaddy

US Ban on Generals an Act of Bullying against Whole Country, Military Says
Spokesman says Washington’s sanctions against military leaders insult not just the Tatmadaw, but all Myanmar people.
— Irrawaddy

Microfinance growth expected to drive higher financial inclusion
Under the Myanmar Financial Inclusion Roadmap for 2019 to 2023, authorities are working with the UN Capital Development Fund (UNCDF) to raise the percentage of the population covered by the financial sector to 60 percent from 48pc currently, said Willian Naing, national officer at the UNCDF, during the Microfinance Success Asia event in Yangon on Tuesday.
— Myanmar Times

New study raises fresh concern over Rohingya repatriation plans
A new study by researchers in Australia challenges claims that conditions are in place in Rakhine State to support a safe, dignified and sustainable return of Rohingya refugees from Bangladesh.
— Frontier Myanmar

Banks need to be more transparent on fraud
Banks should report fraud cases involving their staff in a more transparent manner in order for them to maintain the public’s confidence in their ability to keep money safe.
— Myanmar Times

Mother in Myanmar girl rape case says wrong man charged
The mother of a toddler raped at her nursery school in Myanmar told a court Wednesday that she believes the man charged with the crime is not the perpetrator.
— Bangkok Post

Workshop held on forest conservation
Myanmar has hosted a workshop on teaching skills and information for carrying out community-based forest conservation in regions with different agricultural systems, Xinhua reported.
— Mizzima

Sittwe court penalizes eight people for collecting money for refugees
Eight members of an activist group, Arakan Alin Dagar, were found guilty and fined by Sittwe township court on July 22 for disobeying a civil servant, after they collected donations for Arakan refugees without a permit.
— BNI Online

Anti-grave violations committee discusses draft action plan for implementation
The Committee for Preventing Violence against Children in Armed Conflicts held its second coordination meeting at the Ministry of Social Welfare, Relief and Resettlement yesterday.
— The Global New Light of Myanmar

NLD among four parties seeking new national flag
In an unexpected move, the National League for Democracy has called for the adoption of a new national flag among the 114 amendments it has proposed to the military-drafted 2008 Constitution.
— Frontier Myanmar

Over 9,000 households evacuated from flood-hit areas
The water level in the Ayeyawady River is rising due to the continuous heavy rainfall, forcing flood victims from more than 9,400 households in eight regions and states, where they are being evacuated to flood shelters, according to Disaster Management Department headquartered in Nay Pyi Taw.
— The Global New Light of Myanmar

At Least 7 Dead, Dozens Missing in Magwe Land Dispute
Two people died in a clash and over disputed land on an Irrawaddy River island; five villagers later drowned as their boat overturned and 36 are still missing.
— Irrawaddy

Union Minister U Kyaw Tin delivers a statement at Ministerial Meeting of Coordination Bureau of Non-Aligned Movement held in Caracas
Union Minister for International Cooperation U Kyaw Tin participated at the Ministerial Meeting of the Coordination Bureau of the Non-Aligned Movement (NAM) held in Caracas, Venezuela from 20 to 21 July 2019 and delivered a statement in the debate under the theme “Promotion and Consolidation of Peace through Respect for International Law”.
— The Global New Light of Myanmar

Britain is Still Being Beastly to its Former Colony Myanmar
As Boris Johnson prepares to take over as Britain’s next prime minister, we revisit this 2017 commentary on a classic Johnson gaffe, made during the then foreign minister’s visit to Yangon.
— Irrawaddy