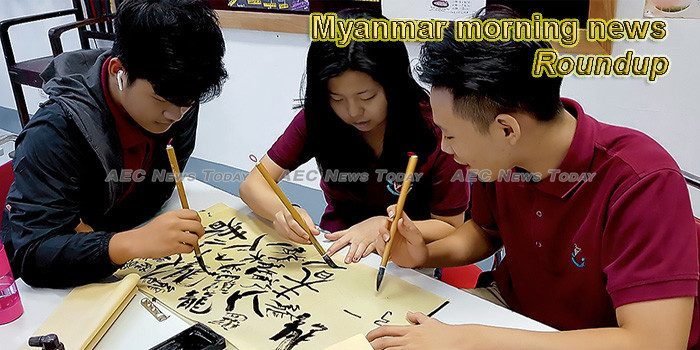 5080 villages to receive electricity with World Bank support this year
A total of 5080 villages will receive electricity this year as part of the National Electrification Plan (NEP) which is currently under implementation with World Bank assistance, U Thura Aung Bo, project manager and deputy chief engineer of NEP, told The Myanmar Times.
— Myanmar Times

Dozens of Thais arrested in Myanmar, police check for wanted criminals
Myanmar authorities conducted raids at entertainment venues, hotels, resorts and residential communities in the Lahu tribe-influenced area of Nayao, near the Thai-Myannar border opposite Chiang Rai’s Mae Fah Luang district on Sunday evening- and rounded up 81 Thai nationals who had illegally entered the country.
— The Nation (very annoying popup)

2 weeks in Myanmar that will change your life
Back in 2010, going to the city of Yangon was, in no uncertain terms, like going back in time, alternating between the 1950s (when the British left and when much of the country’s infrastructure was last upgraded) and much, much longer than that – we’re talking millennia.
— FMT

Police Arrest 24 Villagers Displaced by Armed Conflict in Myanmar’s Chin State
Police in Kyauktaw township in western Myanmar’s troubled Rakhine state on early Monday arrested 24 civilians who had fled their homes to escape armed conflict in Paletwa township of neighboring Chin state, along with the couple who was hosting them, according to police and a local resident.
— Radio Free Asia

Cambodia, Myanmar direct flight on the table
Cambodia and Myanmar last week discussed the possibility of establishing a direct flight between the cities of Bagan and Siem Reap, both home to Unesco-listed cultural sites.
— Khmer Times

Our wetlands are worth saving
The theme of World Wetlands Day 2019 on Saturday – Wetlands and Climate Change – was aimed at encouraging people to conserve wetlands to mitigate climate change, said U Thein Aung of the Myanmar Bird and Nature Society.
— Myanmar Times

Interim Arrangements in Conflict Zones Key to Peace in Myanmar
The “interim” period in the peace process is likely to be long-lasting — until there is a realignment in state-society relations and changed attitudes among Bamar elites who have long dominated Myanmar.
— The Irrawaddy

Myanmar illegal migrants, their guide caught near border
Sixteen illegal migrants and their paid guide were arrested near a natural border crossing to Myanmar in Bang Saphan district on Tuesday.
— Bangkok Post

Myanmar’s Hero Was Killed Here. Now U.S. Brands are Setting up Stalls.
The Secretariat, a building in Myanmar’s former capital where the independence hero Aung San was assassinated in 1947, is a powerful touchstone for the country’s history and identity.
— New York Times

Myanmar’s Karen Rebel Groups Reunite for Anniversary
A make-shift bamboo bridge creaks under the weight of a sweltering crowd of ethnic Karen villagers and refugees crossing the temporary platform on the Moei River, on the way to a stage area marking the 70th anniversary of Karen Revolution Day in Myanmar.
— VOA News

Rally from Rajghat to Myanmar to promote road safety
The government expects a 20% reduction in road accidents from the current five lakh a year, transport minister Nitin Gadkari said on Monday while kicking off the annual Road Safety Week campaign across the country.
— Times of India