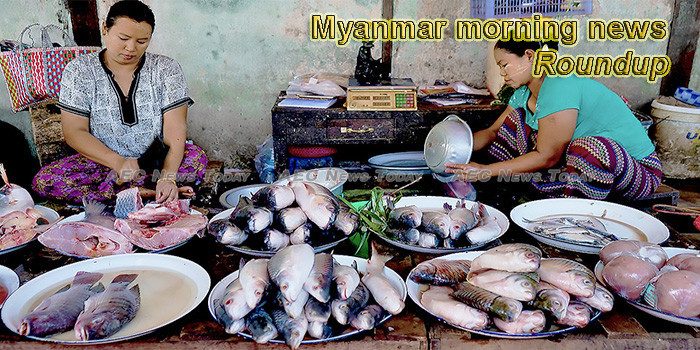 Creation of new ministry part of Myanmar’s plan to incentivise FDI
In an attempt to reverse a recent decline in foreign investment, Myanmar has set up a new ministry tasked with attracting and facilitating fresh inflows, though concerns over the re-imposition of import tariffs by the EU could cool investor appetite.
— Myanmar Times

Myanmar-US trade touches $230 mln in Q1
The bilateral trade between Myanmar and the US totalled US$230 million in the October-December period in the current fiscal, with exports surpassing imports, according to data released by the Ministry of Commerce.
— Global Newlight of Myanmar

Delayed dam project awaits resolution in Myanmar
Though Myanmar officials have expressed their appreciation for the benefits of the Belt and Road Initiative (BRI), Chinese analysts noted that more practical outcomes should be delivered apart from optimistic plans, as some BRI projects still face uncertainty in the Southeast Asian country.
— Global Times

Myanmar cracks down on North East militants holed up in its territory
Myanmar has made a major breakthrough in operations to flush out Indian militants holed up in its territory for decades bordering India’s eastern front. In response, Indian troops have sealed a 22-km-long stretch of the international border along Mizoram to prevent Arakan Army rebels flee from the Myanmerese army.
— Times of India

Nine countries at UN seek to override China to raise Myanmar
The United States, France, Britain and six other countries on the UN Security Council have called for a meeting on Myanmar that is expected to face opposition from China, diplomats said Wednesday.
— MB

A major upgrade works of Yangon Circular Trains
“Without waiting for instructions from above, we have been striving to the best of our abilities to serve passengers with sweet smiles” a train official’s voice softly came out of a meeting in the train office , Yangon, Lower Myanmar.
— Global Newlight of Myanmar

Myanmar Post adapts to new landscape with focus on e-commerce
Myanmar Post is among the state-owned enterprises (SOEs) that have been suffering losses over the last several years.
— Myanmar Times

Can Myanmar go where Thailand fears?
Our neighbours have taken an initial bold step towards military reform, a course that seems unimaginable here.
— The Nation (very annoying popup)

Beware of Facebook, abuse of Section 66(d): digital forum
Myanmar needs to address the spread of fake news on social media by empowering local journalists, providing freer access to information, and pushing for more responsible and conscientious use of the internet, said participants at the third Myanmar Digital Rights Forum in Yangon last month.
— Myanmar Times

The teak kingpin and corruption in the timber trade
A Hong Kong man who became a shadowy teak kingpin and made millions of dollars from corrupt trade in the coveted timber paid for the overseas education of top officials in Myanmar’s ruling junta, an investigation by an environmental watchdog has alleged in a sensational exposé.
— Frontier Myanmar

Myanmar, Japan to cooperate in Business and Value Chain Development project
For the effective works to improve the socio-economic status of farmers, Myanmar will implement Agri-Business and Value Chain Development project, in cooperation with the MAFF and Japan International Cooperation Agency (JICA), according to the Ministry of Agriculture, Livestock and Irrigation.
— Eleven Myanmar

Huawei to bring5G to Myanmar in 3years
THOUGH only 20 per cent of Myanmar’s population have access to 4G services at the moment, the nation would be ready to embrace the fifth generation of wireless technology (5G) with the support of Chinese giant Huawei Technologies Co in two or three years, said Zhu Bo, deputy managing director of Huawei Myanmar.
— Eleven Myanmar

Canadian company to pursue lithium exploration in Myanmar
AsiaBaseMetals Inc announced its entry into the Myanmar mining sector last week. The Canada-based miner will focus on mining lithium and has already obtained the necessary documents that will enable it to submit investment proposals to the Myanmar Investment Commission.
— Myanmar Times

Third group of Myanmar refugees return home from Thailand with UNHCR support
This week more than 500 refugees in Thailand are expected to return to south-eastern Myanmar as part of a voluntary repatriation process led by the Royal Thai Government and the Government of the Union of Myanmar, with the support of UNHCR, the UN refugee agency, and its partners, according to a statement.
— Mizzima

Partners progress at Myanmar development
Total, Woodside and MPRL finalising discussions at Block A-6 as Coleman predicts activity through the year
— Upstream Online

6 Myanmar ‘gravediggers’ nabbed in cemetery by ICA
Six men from Myanmar who claimed to be gravediggers were arrested at a Choa Chu Kang cemetery on Tuesday morning, said the Immigration and Checkpoints Authority (ICA).
— The Straits Times

Measles vaccination drive underway in Yangon Region
We have made such progress against once-common illnesses that we forget they are still around, and still, potentially life-threatening. The measles outbreak in some areas exemplifies what can happen if we reduce our vigilance — especially when it comes to vaccination.
— Global Newlight of Myanmar

Pastor in Myanmar Abducted by Arakan Army
International Christian Concern (ICC) has learned that on Feb. 13, Pastor U Thar Tun was taken from his home in Buthidaung township, Rakhine State, by members of the Arakan Army (AA), a Buddhist rebel group.
— Christian News

‘Pressure on Myanmar to fail’
Western nations’ efforts to pressure Myanmar into solving the Rohingya issue are unlikely to hasten the process.
— Global Times