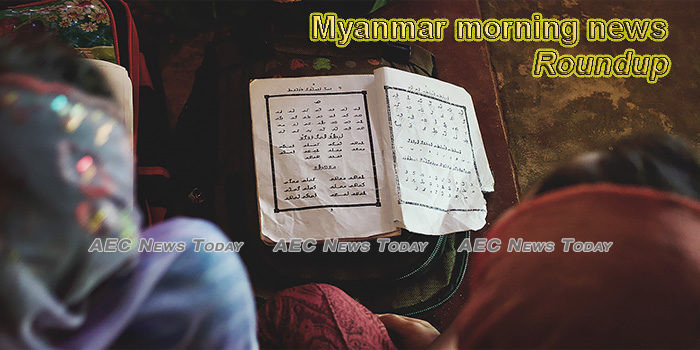 Rubber export income down $5 mln in current fiscal
Myanmar exported rubber worth US$40 million over the last two months of the current financial year, a sharp drop of $5 million compared with the corresponding period of the previous fiscal, according to the Ministry of Commerce.
— The Global New Light of Myanmar

Myanmar’s 10 Key Economic Moments of 2019
As the National League for Democracy government pushes economic reform, The Irrawaddy looks at events that defined Myanmar’s economy in 2019 and its prospects for growth.
— Irrawaddy

Myanmar, Vietnam travellers to get 30-day visa-free visits to boost tourism
Myanmar and Vietnam travellers can visit each other’s country for 30 days without visas starting on January 1, a Ministry of Foreign Affairs official said on Tuesday.
— Myanmar Times

Annual inflation rate remains at 8.6% in Oct
The annual rate of inflation in Myanmar, based on the Consumer Price Index, stood at 8.6 per cent in October, according to a report released recently by the Central Statistical Organization, under the Ministry of Planning, Finance and Industry.
— The Global New Light of Myanmar

‘Free expression’ situation reaches danger level: AAPP
The threat to freedom of expression has reached danger level as Myanmar still hold more than 70 political prisoners, according to a report issued by the Assistance Association for Political Prisoners (AAPP) on December 16.
— Eleven Myanmar

State Counsellor to address nation over ICJ hearings
State Counsellor Aung San Suu Kyi will give a speech on Myanma Radio and Television at 8 pm on December 18, recounting her experiences at the International Court of Justice (ICJ) hearings in the case filed by the Gambia against Myanmar on charges of genocide, according to the State Counsellor Office.
— Eleven Myanmar

Broken rice export fetches over $ 48 m in two months
From October 1 to November 29 in 2019-20 FY, Myanmar earned 48.413 million US dollars from exports of 0.1866 million tons of broken rice to 38 countries, according to the Myanmar Rice Federation (MRF).
— Eleven Myanmar

To develop agro-forestry in SL Myanmar gifts 15,000 teak seeds
The Government of Myanmar has donated 15,000 Teak seeds for the purpose of developing agro-forestry in Sri Lanka subsequent to a request by Sri Lanka at the 3rd Session of the Joint Commission on Bilateral Cooperation between the two countries, in April 2019.
— Daily Mirror

Outbreaks of malaria decline last year
Malaria outbreaks in Myanmar declined by 85 per cent in 2018 and the number of malaria-related deaths also declined by 95 per cent, compared to figures in 2012, according to the WHO’s malaria survey record.
— Eleven Myanmar

Myanmar seeks migrant-worker protections in Malaysia and Thailand
The government is negotiating with Malaysia and Thailand to ensure that hundreds of thousands of Myanmar nationals working in their countries will have access to social welfare benefits, a senior minister said.
— Myanmar Times

MP seeks change in economic-growth indicator
A senior Tatmadaw (military) legislator urged the government to adopt a new method to measure the country’s economic growth, noting that the gross domestic product (GDP) is not a sufficient indicator.
— Myanmar Times

3 not-to-be-missed attractions in Myanmar
Myanmar (Burma) is a large and interesting country blessed by nature with varied landscapes ranging from the lofty peaks of the Eastern Himalayas to the turquoise beaches of the Andaman Sea, from fertile plains to tropical rainforests.
— FMT

Email accounts hacked at Myanmar embassy in Tokyo
Email accounts at the Myanmar Embassy in Japan were hacked on Tuesday, the embassy said in a statement.
— Myanmar Times

Domestic investments cross K630 bln as of mid-December
By Nyein Nyein Investments by Myanmar citizens in the country exceeded K600 billion from 1 October to 14 December of the current fiscal, as per a press statement issued by the Directorate of Investment and Company Administration (DICA).
— The Global New Light of Myanmar

Seminar focuses on building better employer-employee relations
A seminar on Constructive Industrial Relations and Job Security concluded yesterday with representatives from the government, employers, and employees exchanging views on current challenges in labour relations.
— The Global New Light of Myanmar

Wa Army Allows Churches to Reopen in Myanmar’s Northern Shan State
Churches of the Lahu and Kachin Baptist conventions have received permission from the United Wa State Army to reopen after the armed group ordered them closed last year.
— Irrawaddy

Myanmar State Counselor to Meet Local People and Politicians in Rakhine State
During her visit to Manaung Island on Thursday to attend the opening of a solar power plant, Daw Aung San Suu Kyi will meet with local residents and politicians.
— Irrawaddy

Rakhine Administrators Accuse Army of Killing Colleague, Threaten to Quit
The alleged execution of Rakhine State village administrators by government troops has sparked demands for justice for the victims and protection for those remaining.
— Irrawaddy

Feature: Local artisan creates character masks for Myanmar version of Sanskrit tale
For over a decade, Sayar Sein, a local Myanmar artisan, has been creating masks for the characters of Myanmar-version of Ramayana, an ancient Sanskrit tale.
— Xinhua