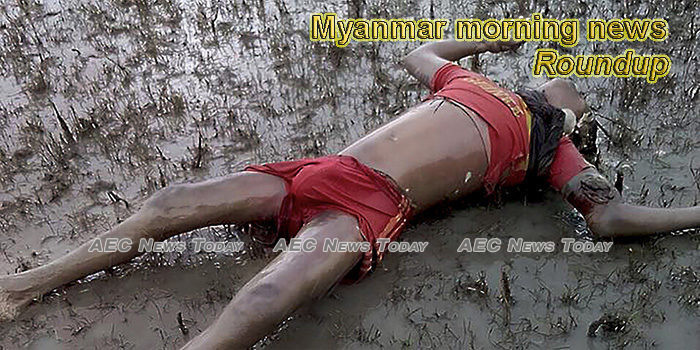 Rights groups launch Myanmar boycott ahead of Hague genocide hearings
Human rights campaigners supporting Myanmar’s Rohingya Muslim minority on Monday called for a global boycott of the country, a day before genocide hearings begin at the International Court of Justice in The Hague.
— Reuters

Govt urged for negotiation with China for pineapple, avocado exports
The Myanmar Fruit, Flower and Vegetable Producers and Exporters Association (MFVP) expects a negotiation of government with China about a legal export channel for pineapples and avocados.
— The Global New Light of Myanmar

What you need to know about Aung San Suu Kyi and Myanmar’s genocide court hearing
On Dec. 10, the Rohingya ethnic group, long the target of oppressive policies by the Myanmar government, will finally see their tragic plight being taken up in an international court of law.
— Qz

Myanmar gets USD26 million boost
MYANMAR is expected to receive US$26 million worth of assistance to improve its secondary education as well as its technical and vocational education and training (TVET) programmes.
— New Straits Times

EU to boost garment industry in Myanmar
The new phase of the European Union’s SMART Textile and Garments project will bring together brands, trade unions and business associations to boost social and environmental sustainability in Myanmar’s garment industry.
— Myanmar Times

Suu Kyi’s defense of genocide charges may shock the West. But it bolsters her status at home.
Aung San Suu Kyi spent the best part of two decades under house arrest when a military junta ruled Myanmar.
— Washington Post

Rape is not a bi-product of conflict in Myanmar – it is a strategy of it
When Aung San Suu Kyi appears in court tomorrow to defend Myanmar against the charge of genocide, she must address the military’s key tactic: rape.
— Independent

Chinese Foreign Minister Visits Myanmar to Speed Up Belt and Road Projects
China’s State Councilor Wang Yi says infrastructure connectivity is the backbone of the giant Chinese initiative and the two sides should cooperate on the ground.
— Irrawaddy

Clashes Over Charter Change Grow Fiercer Than Ever in Myanmar Parliament
The Union Parliament has seen heated exchanges about charter amendments between National League for Democracy and military-appointed members.
— Irrawaddy

5.44 million Myanmar households to get steady electricity supply
THE ELECTRICITY and Energy ministry in Myanmar is confident that half the households in the country will have electricity by the end of this year.
— New Straits Times

Can Myanmar’s working children be saved?
Earlier this year, in June, Save the Children released its Global Childhood Report 2019. The report involved a total of 176 countries, and took a look at indicators such as children’s healthcare, education, nutrition and protection.
— The Asean Post

Myanmar livestock feed demand to rise in 2020
The demand for livestock feed is expected to reach to 4 million metric tonnes next year amid steady growth of the industry, U Mya Han, Chairman of Myanmar Livestock Federation said.
— Myanmar Times

‘We Are Humans’: Shan State IDPs Endure as Myanmar Military, TNLA Continue Clashes
It is a bad sign for civilians in northern Shan State that lavish peace talks held at luxurious hotels in big towns with sumptuous feasts and full security services have stalled.
— Reliefweb

People hold mass rallies in towns to support State Counsellor
Nationwide mass rallies were held yesterday in support of State Counsellor Daw Aung San Suu Kyi who will contest the case filed by the Gambia at the International Court of Justice (ICJ).
— The Global New Light of Myanmar

Thai Navy to ‘monitor’ Myanmar sub
The Royal Thai Navy is preparing to deal with what it calls a “new situation” after learning that Myanmar is going to send its attack submarine to the Andaman Sea for security missions.
— Bangkok post

Rallies Draw Thousands Nationwide in Support of State Counselor’s Defense of Myanmar at ICJ
Supporters of State Counselor hold rallies in cities, towns across Myanmar to show solidarity as she leads the country’s defense against genocide charges at the ICJ.
— Irrawaddy

30,000 monks given alms at Myanmar event
Thirty thousand monks assembled in the early morning chill in Myanmar yesterday for a spectacular alms-giving event, partly organised by a controversial mega-temple under scrutiny across the border in Thailand.
— The Straits Times

This week’s Myanmar morning news feature photo focus on International Day of Commemoration and Dignity of the Victims of the Crime of Genocide and of the Prevention of this Crime, December 9.