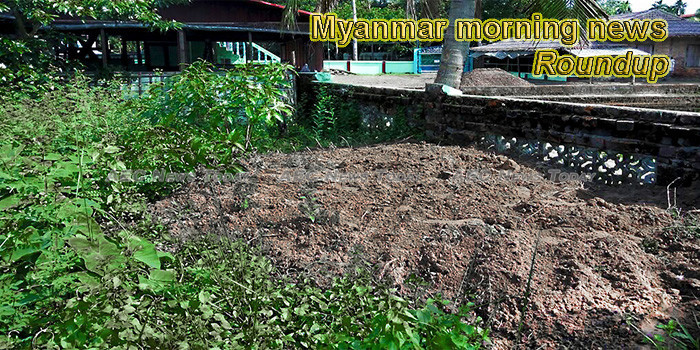 Facebook shuts dozens of Myanmar social media accounts over ‘inauthentic behavior”
Facebook Inc said on Thursday it had shut 216 social media pages, groups and accounts in Myanmar, some tied to the army, to stymie efforts to “manipulate or corrupt public debate”.
— ABS-CBN

Tensions flare as Bangladesh tries to send Rohingya home
Protests erupted in parts of Bangladesh’s Rohingya camps on Wednesday as authorities attempted to restart controversial plans to begin sending refugees back to Myanmar.
— The New Humanitarian

Myanmar’s export earnings from CMP garments rise by $1 bn
Myanmar’s cut-make-pack (CMP) garment industry earned over $3.8 billion from October 1 last year till now, up over $1 billion compared with the same period in the previous fiscal, according to the commerce ministry.
— Fibre2fashion

Rohingya refugees turn down second Myanmar repatriation effort
A second attempt to repatriate the thousands of Rohingya Muslims who fled from Myanmar to Bangladesh has failed after the authorities failed to convince the refugees it would be safe to return.
— The Guardian

Telco voices concerns over internet blackout
A major telecommunications company in Myanmar has issued a statement regarding the government shutdown of internet services in nine townships in Rakhine and Chin states.
— Myanmar Times

Despite Critical Remarks, Malaysia Keen to Invest in Myanmar
“Politics don’t create jobs, only economies create jobs,” the Malaysian ambassador said, despite his government’s past criticism of Myanmar’s treatment of the Rohingya.
— Irrawaddy

Around Ks32 billion profit budgeted for electricity sector
The government will generate a profit of around Ks 32 billion in 2019-2020 fiscal year as the electricity bill is increased, according to the Public Account Committee’s report.
— Eleven Myanmar

Singapore tops list of investors in SEZs
In ten months till July in the current fiscal year, a total of 113 enterprises, including four domestic businesses, brought in capital of US$1.72 billion into the Special Economic Zones (SEZs), according to data released by the Directorate of Investment and Company Administration, state media reported.
— Mizzima

Myanmar Muslims: ‘We’re citizens too’
From difficulties in getting jobs to mounting online abuse, some Muslims in Myanmar are uneasy over what they say are signs of daily discrimination, which have grown since the Rohingya crisis erupted in 2012. Three Muslims share their stories with the BBC.
— BBC

Pulse prices fall as India buys less
Prices of pulses have dropped this month compared to last month following lower demand from India, amid import restrictions for these edible legumes that can only be exported to Myanmar’s western neighbour through quotas.
— Myanmar Times

An unhappy return for IDPs in Kachin State
The return of conflict-displaced families to a Kachin State village, managed by the Tatmadaw without the input of the Kachin Independence Organisation, has deepened mistrust between the two sides of the conflict and may have endangered lives.
— Frontier Myanmar

Seeking solutions to issues in wetland areas
A workshop to conserve Ramsar wetland sites in central Myanmar will be held to educate the public and government officials, said U Thein Aung, chair of the Myanmar Birds and Environmental Conservation Association.
— Myanmar Times

Bargain unit up for grabs in Yankin
This week, our search for value in the property market takes us to Aung Za Ya Street in Yankin, one of the most expensive townships in Yangon, where we viewed a large 2,270 square feet condominium unit up for sale or rent.
— Myanmar Times

Myanmar: Follow The Money And Die
The UN began, in mid-2018, issuing ID cards to Rohingya refugees from Burma and so far have issued the IDs for two-thirds of the 740,000 Rohingya refugees in Bangladesh.
— Strategy Page

Govt threatens charges over use of word in Rakhine story
Action will be taken against officials who described as “nationals” the 700,000 Muslims who have fled from Rakhine State to Bangladesh in state-owned papers and on television, said U Zaw Htay, spokesperson of the President Office.
— Myanmar Times

Podcast: After Reuters—Myanmar’s other reporters
SWE WIN, THE EDITOR OF MYANMAR NOW, a bilingual investigative-news website, was sued for defamation in Mandalay two years ago. His crime? Posting on Facebook about his site’s coverage of an extremist monk’s support of an assasination.
— CJR

Letter: Myanmar should be wary of PPP risks
Your piece “Are PPPs the answer to Myanmar’s financial constraints?” recognises that the use of Public-Private Partnerships (PPPs) does not necessarily reduce the financial burden on the public sector. Therein lies the rub.
— Myanmar Times

This week’s Myanmar morning news feature photo focuses on International Day Commemorating the Victims of Acts of Violence Based on Religion or Belief, August 22.