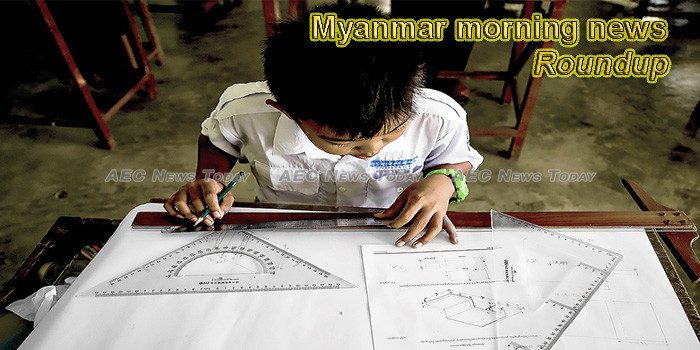 Maritime trade totals $6.26 bln in Q1
The value of Myanmar’s maritime trade in the first quarter of the current fiscal year was estimated at US$6.26 billion, an increase of $177 million compared with the corresponding period of the 2017-2018 Fiscal Year, according to data from the Ministry of Commerce.
— Global Newlight of Myanmar

Hope for Rohingya: Asean foreign ministers put China, Myanmar on notice
A gathering of Asean foreign ministers in Chiang Mai, northern Thailand, on Friday signalled that the bloc is no longer prepared to ignore the actions of member states if it damages the image of the collective with external partners, at the same time putting China on notice over the South China Sea.
— AEC News Today

Myanmar opens up insurance sector for foreign players
Myanmar is all set to open up its insurance sector. Up to three foreign life insurance companies, that will be allowed to operate under a 100 per cent investment scheme, will receive a provisional licence by the end of March 2019 and they will likely start operations by July, said Thant Sin, director general of the financial regulatory department under the Ministry of Finance and Planning.
— DealStreetAsia

Trade with Bangladesh declines 66% in first two months of 2018-19 FY
Myanmar-Bangladesh trade totalled US$14.352 million in the first two months of fiscal year 2018-2019, registering a decline of $28.5 million, or 66.5 per cent, as against the corresponding period last year, according to the Ministry of Commerce’s monthly report.
— Global Newlight of Myanmar

Myanmar receives 3.55 million tourists last year
Around 129 million tourists visited ASEAN in 2018 – a 7.6% growth from the year before, according to a statement by Asean Tourism Federation.
— Eleven Myanmar

MOEE to drill for natural gas in Magwe
A test oil well will be drilled in Myaing township, Magwe Region to determine the presence of oil or gas, U Nyan Tun, deputy managing director from Myanmar Oil and Gas Enterprise (MOGE) , said during the Ministry of Energy and Electricity’s (MOEE) month press conference yesterday.
— Myanmar Times

Myanmar: Year in review 2018
Although Myanmar’s economy has grown above the regional average in 2018, a fall in overseas investment, crop losses and a weakening of the kyat have combined to slow the pace of that economic growth. However, moves to open up sectors of the economy to foreign ownership may boost inward investment in the coming year.
— The Borneo Post

Rohingya crisis experts: Moral diplomacy to mount pressure on Myanmar
Moral diplomacy, with a moral consciousness, can be a potentially effective approach to the conflict, experts said.
— Dhaka Tribune

2018 December saw the highest inflation rate
The average inflation rate in December 2018 was 6.86 per cent, a slight increase compared with 6.66 per cent in November, according to the Consumer Price Index (CPI) and Inflation Rate by the Central Statistical Organisation (CSO).
— Eleven Myanmar

Gov’t instructs Tatmadaw to carry out effective counter-insurgency operation: Spokesperson
The government has instructed the army (Tatmadaw) to carry out effective counter-insurgency operation against the AA insurgent group which threatens the life and property of people and undermines peace and tranquility, said Zaw Htay, Director-General of the Ministry of State Counsellor’s Office, at an informal talk with the press corps at the Presidential Residence in Nay Py I Taw, on January 19.
— Eleven Myanmar

Myanmar army ordered to take offensive against Arakan Army
Myanmar’s military announced on Friday that the Arakan Army, a Buddhist rebel group in Rakhine state, has been classified a terrorist organisation after mounting a flurry of recent attacks.
— Borneo Bulletin

6 Myanmar cops hurt in Rakhine
Six Myanmar border guard police have been wounded in an attack by Rohingya Muslim insurgents in Rakhine state, government media reported on Saturday, amid fears of escalating violence in the region.
— The Daily Star

UN to Myanmar: Allow aid in conflict zones
Calling on the Myanmar government to “immediately reverse its decision not to allow access to all humanitarian organizations,” the United Nations (UN) expert on human rights in the South-East Asian country said that “it’s vital that assistance is able to reach those who have fled violence in the region.”
— Manila Times

Children’s literature festival inaugurated in Myanmar
A Children’s Literature Festival was inaugurated in Myitkyina, Myanmar’s Kachin state on Sunday, aimed at nurturing children and instilling in them the love of reading, the official Global New Light of Myanmar reported on Sunday.
— The Nation