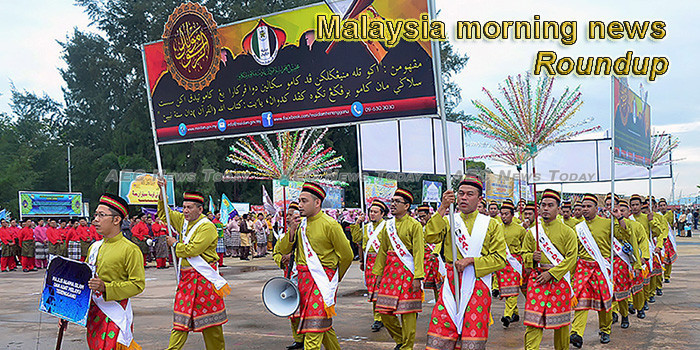 Over RM197m in arrears to electricity supply trust account
The Energy, Science, Technology, Environment and Climate Change Ministry (MESTECC) has yet to receive RM197.9 million in arrears into the Electricity Supply Industries Trust Account (AAIBE) from the Independent Power Producers (IPPs) for the period 2008 to 2018.
— The Sun Daily

Not a good idea, says Malaysia after US offers to host Apec summit in January
Malaysia has disagreed with Washington’s proposal to hold the Asia-Pacific Economic Cooperation (Apec) summit in the United States in January next year.
— The Star Online

Petronas may want close association with Aramco, says expert
Petroliam Nasional Bhd (Petronas) may want to be closely involved with Saudi Arabian oil giant, Saudi Aramco, which will supply much of the oil for its downstream investment, the Refinery and Petrochemical Integrated Development (RAPID) project in Johor.
— The Sun Daily

BNM’s international reserves slip to US$103.2 bil at Oct 15
The central bank says the reserves position is sufficient to finance 7.6 months of retained imports.
— FMT News

Public Bank Q3 earnings affected by OPR reduction
Public Bank Bhd’s net profit for the third quarter ended Sept 30, 2019 fell 1.5% to RM1.36 billion from RM1.38 billion a year ago, due to the negative effect of the 0.25% Overnight Policy Rate (OPR) reduction in May 2019.
— The Sun Daily

300 telco towers to be erected under Sarawak digital economy plan
The Sarawak Multimedia Authority (SMA) will construct 300 telecommunication towers, mostly in the rural areas, under the Sarawak Digital Economy Strategy 2018-2022.
— The Borneo Post

Encorp seeking over RM25m from contractor for project delay
Encorp Iskandar Development Sdn Bhd, a unit of Encorp Bhd, has served a notice of arbitration dated Nov 6, on Konsortium Ipmines Merz Sdn Bhd in respect of Konsortium Ipmines’ delay to complete a project.
— The Sun Daily

In tit-for-tat, Serembu rep urges CM to limit movement of federal officers in Sarawak
A government backbencher has urged Chief Minister Datuk Patinggi Abang Johari Tun Openg to restrict the movement of federal civil servants in Sarawak due to the treatment given to Gabungan Parti Sarawak (GPS) leaders by their departments and agencies.
— The Borneo Post

Amid complaints, Pos Malaysia says some issues with ‘intermittent system accessibility’ but tracking service fine
Pos Malaysia has insisted that its “track and trace” system on its website and mobile app are fully functional, amid customer complaints on social media about delivery delays as well as problems locating packages.
— Malay Mail

Bersih 2.0 decries handouts during poll as bid to fish for votes, says ethically wrong
Delivering aid to fishermen is not against any law, but is still ethically wrong, the Coalition for Clean and Fair Elections (Bersih 2.0) said today amid reports of government handouts with campaigning underway for the.
— Malay Mail

MIER reviewing viability of RM50b bid for PLUS takeover
The Malaysian Institute of Economic Research (MIER) is reviewing the viability and doability of a proposal from an individual group for the takeover of Khazanah Nasional Bhd’s 51% stake in Projek Lebuhraya Utara-Selatan (PLUS) Malaysia Bhd.
— The Sun Daily

Dr M says arts students deserve better benefits, can make money for Malaysia too
Arts students are deserving of the same benefits given to their science-stream peers as the creative industry is a major contributor to the country’s economy, the prime minister said today.
— Malay Mail