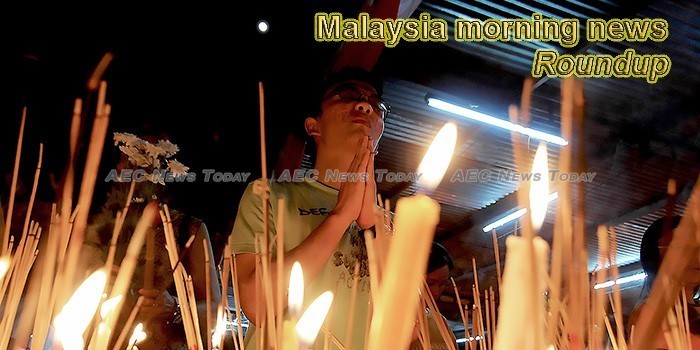 Malaysia aims to become 100pc renewable energy nation
Malaysia is getting ready to make a transition towards 100 per cent renewable energy to make the environment more sustainable, competitive, efficient and greener.
— Borneo Bulletin

Malaysia’s Q1 GDP growth slows to 4.5%
Malaysia’s economic growth moderated to 4.5% in the first quarter of 2019 from 4.7% in the fourth quarter of 2018. The expansion on the economy was underpinned by private sector activity, which remained the key driver of growth.On the supply side, major sectors continued to expand.
— The Sun Daily

MACC gets remand extension for CEO in military vehicle project probe
The MACC has been granted four more days to hold a chief executive officer who is being questioned over allegations of accepting money in return for projects.
— The Star Online

Malaysia Announces Arrests of 3 Remaining IS Cell Suspects
Police in Malaysia said Thursday they had arrested three remaining members of an Islamic State (IS) cell, while a department source identified a Malaysian militant in Syria – an ex-rocker – as the one who ordered them to conduct terror attacks at home during Ramadan.
— Benar News

Top 20 best funded startups in Malaysia
With one of the most developed digital economy in the region, Malaysia is a key country for startups in Southeast Asia. With a maturing startup eco-system, Malaysia is home to an ever-growing number of companies that aim at developing a solid base of operations there before expanding abroad.
— AseanUP

Malaysia sugar tax: Carlsberg promises no price hikes for beers and ‘minimal’ impact on other brands
Carlsberg has pledged not to increase the prices of any of its beers for the rest of this year, as the company prepares for the country’s impending sugar tax this July.
— Food navigator-asia

Two Malaysians involved in trafficking humans across Thai border, ex-cop tells Wang Kelian RCI
Police tracked down at least two Malaysians during its hunt for a cross border syndicate that was trafficking in humans and suspected to be operating illegal migrant camps near the country’s Perlis boundary with Thailand.
— Malay Mail

Malaysia to remain active on all platforms for disaster risk reduction
Deputy Prime Minister Datuk Seri Dr Wan Azizah Wan Ismail concluded her working visit to Geneva on Thursday with the message that Malaysia was determined to actively participate in all future disaster risk mitigation platforms.
— The Edge Markets

Minister says going after travel group for unauthorised use of his name, Tourism Malaysia logo in promos
Datuk Mohamaddin Ketapi said his Tourism, Arts and Culture Ministry will take action against an organisation that used his name and the Tourism Malaysia logo without authorisation in its promotional activities.
— Malay Mail

KLCI slips amid low turnover, ringgit firms on oil prices
The FBM KLCI was slightly lower in morning trade amid headwinds in the external enivronment and despite Bank Negara’s better-than-expected 1Q GDP announcement.
— The Star Online

Top 10 e-commerce sites in Malaysia 2019
With its dynamic economy and developed infrastructures for digital technologies, Malaysia is a very attractive market for e-commerce in Southeast Asia.
— AseanUP

Most Malaysians want to eat healthy but find it too costly
Most Malaysians want to maintain a healthy diet but they find that it is much more expensive to achieve a healthy diet.A survey conducted by Food Industry Asia (FIA) and research firm IGD finds that 99% of respondents are actively trying to improve their consumption habits.
— The Sun Daily

Mahathir assures Raya bonus for civil servants
The government will give civil servants an Aidilfitri bonus, said Prime Minister Tun Dr Mahathir Mohamad.However, he did not say the amount that would be paid and if the bonus would be given to all civil servants.Mahathir said this will be announced later.
— The Sun Daily

Teen suicide brings social media usage and mental health into sharp focus
Malaysians and the rest of the world were shocked by the story of a teenage girl who is said to have taken her own life after a poll she ran on Instagram encouraged her to do so.
— The Star Online

Malaysia just below UAE, Albania in ‘Islamicity’ index, but New Zealand beat them all
Malaysia is ranked the third highest-ranking Muslim-majority country in this year’s global Islamicity Index which measures a society’s adherence to Quranic teachings and Prophet Muhammad’s practices.
— Malay Mail

Supplement maker DXN said to weigh RM4.17b sale
DXN Holdings Bhd.’s owners are exploring a sale of the Malaysian health supplement producer, in a deal that could value the firm at as much as US$1bil (RM4.17bil) including debt, people with knowledge of the matter said.
— The Star Online

MPs’ asset disclosure rule good, but pundits fear telling only MACC will make it too powerful
Political observers applaud Tun Dr Mahathir Mohamad’s recent announcement for all federal lawmakers to declare their net worth, and that of their immediate family, without exception.
— Malay Mail

State to continue developing Islamic syiar: Abang Johari
The state government will continue to develop Islamic syiar to set an example for others as Islam is a religion that values brotherhood, peace and equality, said Chief Minister.
— New Sarawak Tribune

PricewaterhouseCoopers appointed so that audit on YaPEIM independent: Minister
The decision to appoint PricewaterhouseCoopers to audit the accounts of Yayasan Pembangunan Ekonomi Islam Malaysia (YaPEIM) was made to ensure the process was independent, said Minister in the Prime Minister’s Department Datuk Seri Dr Mujahid Yusof Rawa.
— The Sun Daily

Missing nurse found murdered in Cyberjaya condo
A nurse who was practicing at the Serdang Hospital and recently reported missing, has been found allegedly murdered with her body being discovered with slash wounds at a condominium in Cyberjaya yesterday.
— Malay Mail

Umno must get ready for snap GE, says Ku Li
Chairman of the Umno Council of Advisors Tan Sri Tengku Razaleigh Hamzah called on party members to prepare themselves for an early 15th general election, even though the current government’s mandate only expires in 2023.
— Malay Mail

Ihsan Perdana account used for ‘transit’ funds: IPSB managing director
The High Court here was told today that the Ihsan Perdana Sdn Bhd (IPSB) account was used to deposit a certain sum of funds in transit before being transferred to another account.Managing director of Ihsan Perdana, Datuk Dr Shamsul Anwar Sulaiman, 58, said he was informed of the .
— The Sun Daily

Set safety and wellbeing SOP for teachers involved in out of school events: Association
May 16 is a very special date and closely synonymous with teachers in Malaysia. Each year, on this day, teachers will be celebrated for their services and sacrifices in educating the children of the nation.Hence, to ensure continuous wellbeing of 400,000 teachers whose roles.
— The Sun Daily

LED light can damage eyes, health authority warns
LED cellphone, tablet and laptop screens do not pose a risk of eye damage because their luminosity is very low compared to other types of lighting.
— FMT News