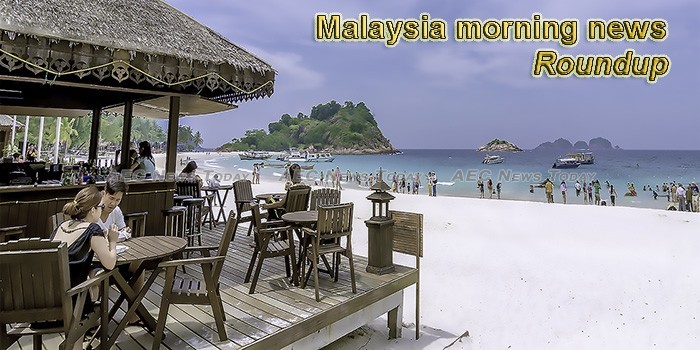 Malaysia to finalise deal on China-backed railway project early April
Malaysia will finalise talks with China in early April regarding a US$20 billion (S$27 billion) rail project that has been suspended since July last year, the Malaysian representative for the negotiations said late on Friday (March 22).
— The Straits Times

Decentralisation the best bet for Malaysia’s growth
Malaysia’s burgeoning middle class has high expectations for future economic development. But the nation won’t escape the ‘middle-income trap’ and won’t have socially-inclusive growth under current government policies. A range of reforms that deliver decentralised decision-making is needed to build the knowledge-led economy to propel Malaysia to the next level of development.
— East Asia Forum

Malaysia, model country in championing world peace
The success of Malaysia in organising the Peace Solidarity Assembly at Dataran Merdeka Saturday night clearly showed Malaysia as a model country in the eyes of the world to champion global peace.
— The Borneo Post

Malaysia will only absorb good values from international treaties: Dr M
The Malaysian government wants to ratify the Rome Statute of the International Criminal Court, but at the same time, it also wants the treaty to be subject to Malaysia’s conditions, according to Prime Minister Tun Dr Mahathir Mohamad.
— The Sun Daily

Lima ’19, platform to share new defence ideas, technologies
The Langkawi International Maritime and Aerospace Exhibition 2019 (Lima ’19), which will be taking off on March 26, will be a platform for the local defence industry to continue sharing ideas and technologies with new and leading defence industries from all over the world.
— The Sun Daily

Fit Malaysia launched to promote healthy lifestyle
STARTING in April, government offices in Selangor will be encouraged to spend an hour every Wednesday, from 4.30pm to 5.30pm, engaged in sports and recreational activities.
— The Star Online

PM again warns of retaliation if EU keeps up palm oil offensive
Putrajaya will consider retaliation if the European Union persists with its campaign against palm oil, the prime minister said when describing the offensive as disingenuous.
— Malay Mail

MAP should explain methodology of pornography study – DPM
Malaysians Against Pornography (MAP) should clarify the methodology of its study which found about 80 per cent of children aged between 10 to 17 intentionally watched pornography in 2018.
— The Borneo Post

Sapura back in investors’ radar, to strengthen in next few months
Potential improvement in future profitability as well as better earnings growth from projects that in the pipeline showing positive signals for Sapura Energy Bhd.
— New Straits Times

Inflation falls 0.4pc in February 2019
The Consumer Price Index (CPI) fell 0.4 per cent to 120.8 in February 2019 compared with 121.3 in the same month last year mainly due to a decline in transport cost, says the Statistics Department.
— New Straits Times

Supporting women entrepreneurs in Sarawak
Malaysia’s fight for gender equality continue to make its strides, especially towards financial freedom and economic self-sustainability in a world predominantly male-oriented.
— The Borneo Post

InvestKL CEO: Some MNCs’ plans fail to take off because of external business reasons
While many large global multinational companies (MNCs) have successfully thrived in Greater Kuala Lumpur, some ventures have failed to take off here due to various business reasons.
— The Sun Daily

Social media, mobile tech double-edged swords
I was sitting in a coffee shop having breakfast with some friends in one of the food stalls in Kota Samarahan, a small town not very far from Kuching.
— New Sarawak Tribune

Malaysia morning news for May 4