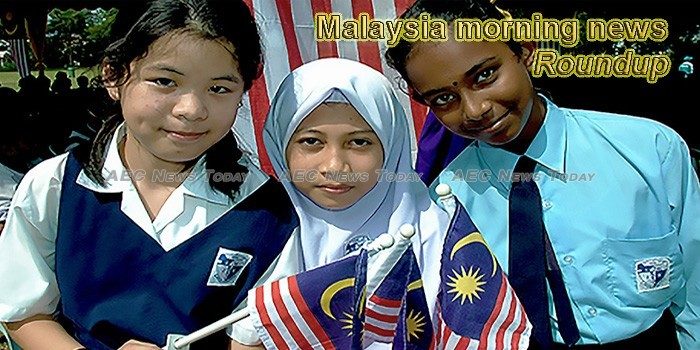 Govt allocates RM3 million for national food bank programme
The government today announced that it has approved a RM3 million allocation for the provision of 14 lorries equipped with chillers for the Food Bank Malaysia programme for the B40 group and 20 public universities.
— FMT

No economic sense to close or sell Malaysia Airlines
Much has been written about the national air carrier in the past three weeks ― from shutting it down to selling it off.
— Malay Mail

MALAYSIA ‘ALREADY IN DEFLATION’ – AS FOOD PRICES ACROSS SE ASIA FALL: ECONOMISTS
Low inflation sweeping across South-East Asia is here to stay, raising the odds some of the region’s biggest economies may reverse course on interest rates this year.
— Malaysia Chronicle

Healthy growth in Malaysia’s IPI and private consumption
Malaysia’s industrial production index (IPI) has been projected to grow between three per cent to four per cent, while private consumption is anticipated to be supported by the healthy rise in income and employment.
— The Borneo Post

Mahathir: Muslims must have good understanding of Al-Quran, not merely be able to recite it
Some Muslims who did not understand the true teachings of the Al-Quran have resorted to commit acts that are prohibited in the faith, such as killing others, says Malaysian Prime Minister Mahathir Mohamad.
— Eleven Myanmar

MAS can do a Lufthansa in A380 conundrum
National carrier Malaysia Airlines Bhd (MAS) could follow in the footsteps of German airline Lufthansa AG to re-sell its six superjumbo planes Airbus A380 to the European manufacturer.
— New Straits Times

What to Know as Goldman Sachs Faces Malaysia’s Legal System
Goldman Sachs Group Inc. is about to learn a whole lot more about the Malaysian legal system. Three units of the U.S. investment bank and two former employees face criminal charges in the Southeast Asian country relating to their role in raising $6.5 billion for the scandal-plagued state investment fund 1MDB.
— The Washington Post

Suhakam disappointed Malaysia refuses to uphold ICERD
The Human Rights Commission of Malaysia (Suhakam) expressed disappointment today with the government’s decision not to accede to the International Convention on the Elimination of Racial Discrimination (ICERD).
— Malay Mail

Amal, a sensible option for Malaysia Airlines utilising its A380s
Malaysia Airlines Bhd’s (MAS) pilgrim-centric service dedicated for Umrah and Hajj, Amal is deemed as a “sensible” option for the national carrier to use the four-engined A380s superjumbo in its stable.
— New Straits Times

DPM: Malaysians need to be patient, give time to Pakatan govt
Deputy Prime Minister Datuk Seri Dr Wan Azizah Wan Ismail has called on all Malaysians to be patient and give the Pakatan Harapan (PH) government time to solve all the problems left by the previous Barisan Nasional government.
— Malay Mail

Samsung Galaxy M20 launches in Malaysia with 5000mAh battery at RM799
We have all been anticipating Samsung’s M series for quite awhile now. The M series is made for those in a budget but still delivering specs that are a bang for your buck. In Malaysia, the Samsung Galaxy M20 finally arrived and features the Infinity-V screen and a whopping 5000mAh battery capacity and priced at RM799. The device goes on sale on the 20th of March, starting 9AM onwards.
— Tech Nave

Shell Eco-marathon Asia returns to Malaysia in 10th year
Shell announced Monday that Malaysia will host the Shell Eco-marathon Asia as part of its global Make the Future Live program. To be held at Sepang International Circuit, Kuala Lumpur, the Asia competition comes back to where it was first held in 2010, and celebrates its 10th year of challenging bright young student minds to design and build ultra-energy-efficient cars, and then take them out on the track in competition.
— Arab News

Second Malaysian confirmed dead in Lombok earthquake
A second Malaysian has been found dead at the Tiu Kelep Senaru waterfall in Lombok, Indonesia, which was struck by an earthquake-triggered landslide on Sunday.
— New Straits Times

Temperatures set to hit 40 degrees Celsius in Kedah as heatwave grips Malaysia
A Level 2 heatwave alert has been issued for parts of the Malaysian state of Kedah, as a heatwave grips the country.
— Channel NewsAsia

‘Revisions to open AP policy not an issue for local market’
The Ministry of International Trade and Industry’s (MITI) decision to open up the Approved Permits (AP) should not pose a serious threat to the domestic automotive market, analysts say.
— The Borneo Post

How Malaysian pastry chefs became the best in the world
On January 28 this year, a team of Malaysian pastry chefs made history when they were crowned champions at the Coupe du Monde de la Pâtisserie (or World Pastry Cup) 2019 in Lyon, France – the first time that Malaysia has ever bagged the top spot in the 30-year-old competition.
— Star2

EXABYTES’ REGIONAL AMBITIONS GETS US$10.7MIL BOOST FROM MALAYSIAN PE FIRM, EKUINAS
It is your classic story of talented geek who dropped out of college because the company he started from his bedroom was earning him more money that he would have made as a fresh programmer in Penang.
— Digital NewsAsia

RAM: Stable outlook for insurance sector amidst regulatory reforms
RAM Ratings (RAM) has maintained a stable outlook on the Malaysian insurance industry for 2019.
— The Borneo Post

Home retailer Iuiga plans to expand into food, enter Malaysia
SINGAPORE homeware brand Iuiga is expanding its range and reach, introducing food products and consumables in the second half of this year and planning to head to Malaysia next year, chief growth officer Jaslyn Chan told The Business Times.
— Business Times