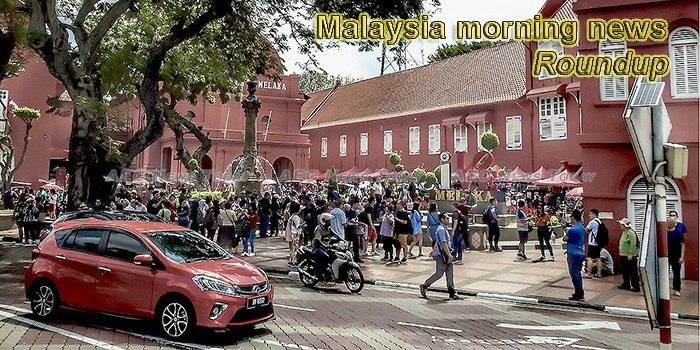 Inflation down, yields up; Malaysia looks set for positive rerating
TEN months since Malaysia formed a new government, its equity market has corrected by almost 9 per cent. The initial variability of government policies had unsettled markets.
— Business Times

Kuala Lumpur says foreign militants eyeing Malaysia as safe haven
Malaysian police said yesterday that it has uncovered a plan by foreign militants to use the country as a “safe haven” transit and logistics centre, following the collapse of terrorist outfit Islamic State in Iraq and Syria (ISIS) in the Middle East.
— The Straits Times

More pressure on Malaysia’s banking system
The pressure on the banking sector is not expected to ease anytime soon, with more analysts lowering their core projected figures this year.
— The Star Online

BNM likely to hold OPR steady at 3.25 pct in 2019
Analysts have maintained their view that Bank Negara Malaysia (BNM) will most likely hold the overnight policy rate (OPR) steady at 3.25 per cent in 2019, on the back of growth moderation and inflation remaining subdued.
— The Borneo Post

Malaysia’s Proton revs up revival with hot-selling SUV
Once-ailing Malaysian carmaker Proton is seeing a turn in its fortunes since its Chinese partner Geely brought the X70 sport utility vehicle to the Malaysian market last December.
— The Straits Times

Income tax Malaysia 2017 vs 2018 for individuals: What’s the difference in tax rate and tax reliefs?
Now that Malaysians can begin filing their taxes, it’s good practice to take a good look at your hard-earned income from the previous year and take advantage of the tax reliefs offered by the Inland Revenue Board (IRB) to get some money back via tax refunds.
— Malay Mail

Malaysia Airlines has no Boeing 737 Max planes in its fleet
Malaysia Airlines Bhd said it has written to Boeing seeking for more technical details ahead of the delivery of its order expected in 2020, according to an emailed statement from the company.
— The Star Online

Malaysia’s Mahathir reportedly says he’d prefer to side with China rather than ‘unpredictable’ US
Malaysian Prime Minister Mahathir Mohamad said he would prefer to take sides with China over the U.S. if his country was forced to take sides in the trade war, the South China Morning Post reported on Friday.
— CNCB

Malaysia joins in 2019 Commonwealth Day celebrations
Malaysia has and will continue to contribute to the Commonwealth in areas such as peace and security, the prevention of violent extremism, sustainable development, and the empowerment of women and youth, the Foreign Ministry said.
— New Straits Times

Malaysia: Kim Jong Nam murder suspect freed
An Indonesian woman accused in the killing of the North Korean leader’s half brother was released after the prosecutor withdrew the murder charge.
— Aljazeera

Rising stockpiles weigh on Malaysian palm market
Malaysian palm oil futures edged lower in first-half trade on Monday and were expected to fall further after government data showed a pile-up in stocks of the edible oil.
— The Edge Markets

Income from Singapore is not taxable: IRB
Income received from employment exercised in Singapore is not liable to tax in Malaysia, says the Inland Revenue Board of Malaysia (IRB).
— New Straits Times

PM: Umno-PAS unity ‘very bad’ for multiracial Malaysia
The idea of an Umno-PAS coalition is “very bad’ for a plural society like Malaysia, Tun Dr Mahathir Mohamad said today even as he noted the wave of support from the Malay community.
— Malay Mail

Can-One’s MGO for Kian Joo “not fair but reasonable”
Can-One International Sdn Bhd’s (CISB) mandatory takeover offer to acquire all the remaining shares in Kian Joo Can Factory Bhd it does not already owned at RM3.10 per offer share is deemed “not fair, but reasonable”.
— The Sun Daily