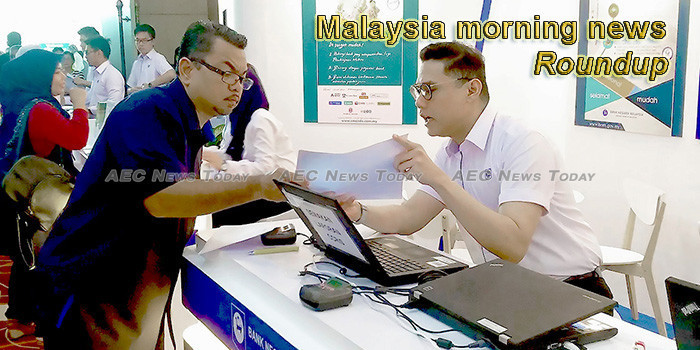 PM: MH17 findings ‘politically-motivated’, no proof Russia to blame
Prime Minister Tun Dr Mahathir Mohamad today claimed that the recent findings on the culprit behind the shooting down of Malaysia Airlines flight MH17 was a “politically-motivated” conclusion to solely blame Russia.
— Malay Mail

Malaysia’s capital market expands to RM3.19 trillion, says SC
Security Commission warns, however, that challenges are increasing and there is a greater need for the SC and the private sector to work together to grow the market.
— FMT News

M’sian, who claimed he had gay sex with M’sian minister, sacked
Haziq Abdul Aziz, the man who confessed to having gay sex with Malaysian Economic Affairs Minister Azmin Ali, has been sacked from his job.
— Mothership

Apple eyeing Malaysia as one of the countries to move production capacity
With the trade war continuing unabated, Apple is looking forward to securing a safer supply chain away from embattled China and risky Taiwan
— The Independent

MH17 murder charge announcement a bittersweet moment for victims’ families
The parents of an Australian man who was on MH17 have admitted it was hard seeing the “hard” faces of the men who are set to be charged with murdering their son.
— ABC

Over 50% of M’sians think asylum-seekers are economic migrants
PETALING JAYA: More than 50% of Malaysians believe people claiming to be refugees and entering the country are economic migrants and want to claim welfare benefits, says an independent market research firm.
— The Star Online

SMEs sceptical banks will heed government’s call to ease lending
Small and medium enterprises (SMEs) remain doubtful that creditors will ease lending, despite Putrajaya’s appeal for banks to loosen their strict loan standards as the economy picks up.
— Malay Mail

Malaysian victims’ families react to identification of suspects who downed flight MH17
Family members of victims of the Malaysia Airlines MH17 tragedy voiced their gratitude following a report yesterday that revealed the four main suspects who had allegedly shot down the plane in July 2014 over rebel-held.
— Malay Mail

Witness says ‘under duress’ when completing SRC’s guarantee for RM2b loan
A government official testified today she was put “under duress” when she was asked to expedite the processing SRC International Sdn Bhd’s application for the first government guarantee over RM2 billion loan from the.
— Malay Mail

Paramount to pay RM177m special dividend from stakes sale in subsidiaries for RM540.5m
Paramount Corp Bhd is selling controlling stakes in three subsidiaries to Two Horses Capital Sdn Bhd (THC) for an indicative cash consideration of RM540.5 million. Following the disposal, it will pay RM177 million by way of special dividend to shareholders.
— The Sun Daily

Home ownership low not because of loans but prices just too high, says think tank
The real reason Malaysians aren’t buying property nowadays is because the units are priced beyond their pocket rather than the banks’ refusal to offer loans, the Centre for Governance and Political Studies (Cent-GPS).
— Malay Mail

Gas cylinder smugglers stopped in their tracks
The Royal Ranger Regiment 10th battalion has thwarted an attempt by two suspects to smuggle a total of 280 cooking gas cylinders (14kg each) into Indonesia. According to a statement issued by the battalion, both local male suspects aged 38 and 48 years old were apprehended by the rangers near the Sarawak.
— The Borneo Post

Lynas Malaysia drives STEM education programmes for local communities
Lynas Malaysia has welcomed the comments by Pahang State Exco for Education, Religion and Health, Datuk Seri Syed Ibrahim Syed Ahmad that it is a “gem” in the state.”Lynas is not an enemy of the people, because in addition to contributing to the state economy, the factory also contributes to social welfare.
— The Sun Daily

Removal of US exports suspension positive for Pantech
Analysts are positive on the removal of the suspension on shipments of Pantech Group Holdings Bhd’s (Pantech) carbon steel butt-weld fittings to the US as it restores earnings visibility back to the company. In an announcement on Bursa Malaysia, Pantech said the US Department of Commerce (DoC) issued a final.
— The Borneo Post

Writer: I’m not blackmailing Anwar, just trying to sell him rights to book
Author Yahaya Ismail today denied attempting to blackmail Datuk Seri Anwar Ibrahim for RM400,000. He said he was merely trying to sell the publishing rights to his book to the PKR president. The book is on why Anwar should not be made prime minister.
— The Sun Daily

Report: Indonesia mulls Malaysia-Sumatra bridge as part of RM290b highway network
Some time in the future, peninsular Malaysia might be connected to Sumatra seeing that the Indonesian government is currently studying the possibility of building a bridge connecting the two nations as part of its plans to.
— Malay Mail

Seacera gets letter of demand for RM18.3m
Secera Group Bhd has received a letter of demand from AmBank Islamic Bhd, demanding payment of RM18.30mil including future profit over the loan facilities taken by its unit.
— The Star Online

Rosmah’s solar project graft trial to be heard in High Court after all
The corruption trial of Datin Seri Rosmah Mansor, wife of former prime minister Datuk Seri Najib Abdul Razak, over the Sarawak solar project will be heard in the High Court.This follows Rosmah’s decision to withdraw her appeal today in the Court of Appeal against the Kuala Lumpur High Court decision of March 15.
— The Sun Daily

Labuan Airport hopes for increase in international, domestic flights
Labuan Airport (pix) is capable of handling any increase in flights – both domestic and international – due to its capacity and facilities.”We hope there will be an increase as we can handle it,” said airport manager Amat Madin at a press conference after Malaysia Airports Labuan Hari Raya Open House here today.
— The Sun Daily

Anwar leaves it to police to investigate blackmailing-author
PKR president Datuk Seri Anwar Ibrahim said tonight that he would leave it to the police to take appropriate action against author Yahaya Ismail who threatened to publish a book disparaging Anwar, if he was not paid RM400,000.
— The Borneo Post

Sabah govt to develop old Tawau Airport
The state government is keen on utilising its land at the old Tawau Airport at Jalan Utara for mixed development.Sabah Chief Minister Datuk Seri Mohd Shafie Apdal said the project would involve construction of property with commercial value such as hotels and shops besides housing units.
— The Sun Daily

Najib did not declare conflict of interest, says 40th witness
There was no declaration of conflict of interest by Datuk Seri Najib Abdul Razak when he chaired a Cabinet meeting related to SRC International Sdn Bhd in February 2012, according to the 40th prosecution witness in the former premier’s trial today.
— The Sun Daily

Sex video a political stunt, says Mahathir
The sex video that has been circulating is a political stunt, Prime Minister Tun Dr Mahathir Mohamad said today. He said it was just a political attempt to hurt him and that we should let the police investigate.
— The Sun Daily

The worst is over for Top Glove, say analysts
Top Glove Corp Bhd, whose net profit fell 36.5% in the third quarter ended May 31, 2019 (3Q FY19), is expected to achieve better results moving forward, said analysts.On Tuesday, the group said its net profit fell to RM74.67 million during the quarter from RM117.57 million a year ago due to a surge in natural.
— The Sun Daily