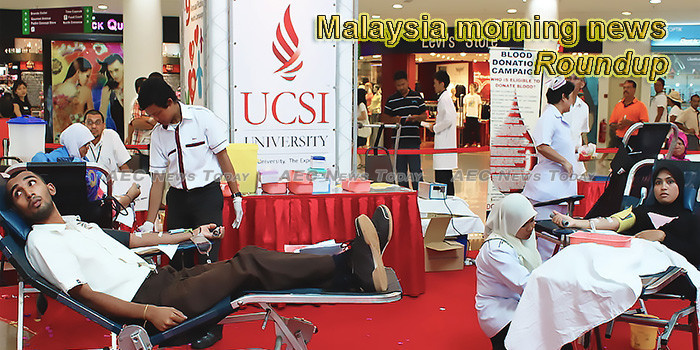 Ministry to work with telcos to improve coverage in rural S’wak – Dr Rundi
The Ministry of Utilities will be collaborating with telecommunication service providers in an effort to improve coverage in rural Sarawak, said its Minister Dato Sri Dr Stephen Rundi Utom. Dr Rundi said collaboration with the telecommunication service providers was very important as poor.
— The Borneo Post

From hobby to analytics: Malaysia’s dronetech companies scale up for the future
In the office of Aerodyne Group in Petaling Jaya, Selangor, a drone designer was giving his full attention to fine-tuning a set of propeller guards on his computer.
— Channel NewsAsia

Bans alone won’t reduce plastic usage
The Malaysian government and non-governmental organisations (NGO) should get their hands dirty and not depend on bans alone to get people to reduce their plastic use.
— New Sarawak Tribune

Will Malaysia finally address the human trafficking of Rohingya?
IN A FEW WEEKS, Thailand and Malaysia will again be ranked in the US Trafficking in Persons Report (TIP report) for their efforts in combating human trafficking. Many government’s rightly go to great lengths to avoid the lowest ranking – Tier 3 – as it can invite sanctions and have other punitive ripple effects, such as discouraging foreign investment.
— The Star Online

Stricter checks at ports for plastic waste
More stringent checks will be carried out on containers at all the ports to ensure that no prohibited plastic waste enters the country. Customs director-general Datuk Paddy Abdul Halim said they were working with the National Solid Waste Management Department and the Department.
— The Borneo Post

‘Malaysia to be promoted at overseas travel mart’
The Ministry of Tourism, Arts and Culture will focus on Malaysia’s promotion through Travel Mart abroad.
— The Borneo Post

More goodies in store for sustainable palm oil
The government is ready to dish out additional incentives to encourage oil palm planters to embrace the Malaysian Sustainable Palm Oil (MSPO) certification, which is aimed at boosting.
— New Sarawak Tribune

Malaysia bans smart devices at Cabinet, exco meetings
Malaysia is banning all mobile phones and other digital devices from being taken into Cabinet, post-Cabinet and state executive council meetings where policy matters and official secrets are being discussed.
— The Straits Times

Businessman calls for religious schools to depend less on gov’t assistance
A business activist has called on religious schools to be less dependent on state or federal governments for financial assistance as it was difficult for them to continue with large scale funding in view of the present austerity drive.
— The Sun Daily

Quit lobbying for M’sia Day to be celebrated in S’wak – STAR
State Reform Party (STAR) president Lina Soo has scoffed at the Pakatan Harapan (PH) Sarawak’s recommendation to have this year’s Malaysia Day celebration in Sarawak.
— The Borneo Post

Malaysia’s former anti-graft chief clears the air over resignation
Former chief of the Malaysian Anti-Corruption Commission (MACC) Mohd Shukri Abdull said he was not fired or pressured to step down from his job, as he addressed speculation on why he quit at the midway point of a two-year contract.
— The Straits Times

Govt to announce routes after negotiation successful: CM
What looks certain is that the state will have its own airlines. Why the certainty is so – because the Chief Minister Datuk.
— New Sarawak Tribune

Latheefa’s appointment constitutionally right, politically wrong, says Kit Siang
The DAP supremo says the lawyer would have protested too if she had not been the person appointed MACC chief.
— FMT News

Lee Lam Thye says focus on integrity to avoid workplace accidents
The value of integrity needs to be given more focus in ensuring safety and health issues at the workplace are not viewed lightly.
— New Sarawak Tribune

ESSZone curfew extended to June 25
The 6pm to 6am curfew involving the waters of seven districts in the Eastern Sabah Security Zone (ESSZone) which is to end tomorrow, has been extended to June 25, Sabah police commissioner Datuk Omar Mammah announced in a statement here today.
— The Borneo Post

Pressure mounts on aviation industry over climate change
The airline industry says it is hellbent on reducing emissions – but the technology needed to drastically reduce its carbon footprint is still a long way to come.
— FMT News

The business of railway connectivity
As one of the more important forms of transport systems, railways remain crucial in connecting the public across major distances. Key cities around the globe have their own metro systems connecting urban vicinities with the central town area.
— The Borneo Post

Star Wars video game creator tests new formats to rival Fortnite
Electronic Arts Inc., the creator of a Star Wars line of video games, shows off two of its newest titles, illustrating how the industry is wrestling to compete with the runaway success of Fortnite.
— FMT News

Viral footage becomes important tool for police investigations
Video clips posted on social media have proven to be effective in fighting crime as since January police have managed to arrest 87 suspects and solve 29 out of 35 cases based on evidence extracted from viral footage.
— The Sun Daily

Tam the rhino to ‘live on’ at Sabah Museum
Sabah Deputy Chief Minister Datuk Christina Liew said Tam, the last male rhinocerous in Malaysia which has died, would “live on” at the Sabah Museum. She said an actual size replica would be constructed using its bones and once ready, foreign and domestic tourists would.
— The Borneo Post

Human Writes: Malaysia needs to declare a climate emergency
My nine-year-old daughter sometimes fantasises about her future children and how she’ll raise them. It’s a conversation that numbs me. Frankly, the future deeply troubles me. How can I tell her, from this point in time, based on a business-as-usual scenario for human activities, that the future.
— Star2.com