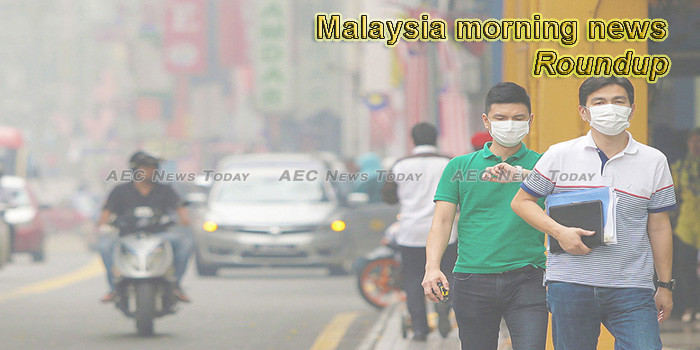 SME Corp targets digitalisation of all SMEs by 2024
SME Corporation Malaysia (SME Corp) expects all small and medium-sized enterprises (SMEs) in the country to embrace digitalisation in their business operations within five years compared with the current 32 per cent.
— The Sun Daily

Fitch Ratings affirms Maybank’s IDRs at A minus, outlook stable
Fitch Ratings has affirmed the long-term foreign- and local-currency issuer default ratings (IDRs) of Malayan Banking Bhd at “A-“.
— The Star Online

Malaysia’s $100BN Smart Island City
Malaysia are raising four artificial islands from the waters of the Johor Strait and constructing a USD $100BN smart city from scratch.
— The B1M (video)

Finance Ministry: Sarawak to get RM350m for school repairs provided RM350m loan repaid
The federal government is ready to extend RM350 million to the Sarawak state government to repair dilapidated schools in the state, said the Ministry Of Finance.
— Malay Mail

NPLs of hawkers, small traders rises to 98%
Non-performing loans (NPLs) involving hawkers and small traders through financing facilities under the supervision of the Ministry of Domestic Trade and Consumer Affairs since 2013 have risen to 98%, its minister, Datuk Seri Saifuddin Nasution Ismail said.
— The Sun Daily

Papar district heath office studying impact of smoke candy
The Papar District health office is studying a “smoke candy” that is being consumed by students in SK Pekan, as concerns have been raised that it encourages children to smoke cigarettes.
— The Star Online

RAM: Malaysia to see higher inflation of 1.6% for June
Malaysia’s inflation rate is expected to accelerate to 1.6% in June from the 0.2% expansion in May, according to RAM Ratings. The Department of Statistics is expected to release the June inflation figure this Wednesday.
— The Sun Daily

Law to be amended to expose real beneficiaries of corrupt activities – Latheefa
The Malaysian Anti-Corruption Commission (MACC) Act 2009 will be amended to include a provision on beneficial ownership to ensure that the real owners of enterprises cannot escape lawsuits and enforcement action, said MACC chief commissioner Latheefa Koya.
— The Borneo Post

Citing 1MDB, SRC International, MACC urges govt to amend law to expose real owners in companies
The new Malaysian Anti-Corruption Commission (MACC) chief hopes the government will soon table in Parliament its plan to compel companies to disclose the identities of the shadowy owners who are unnamed in the register but.
— Malay Mail

Cops record statement of PKR rep over sex video case
A PKR state assemblyman has been summoned by Bukit Aman to have his statement recorded in connection with the sex video implicating Economic Affairs Minister Datuk Seri Azmin Ali.
— The Star Online

2018: Very drastic hike in calls concerning fires
The drastic hike in incidents of fire nationwide last year is very alarming and requires more proactive preventive measures and enforcement when 36,043 calls over fire were recorded compared to 28,853 calls in 2017.
— The Sun Daily

Number of human trafficking victims in Thailand at record high following demand for cheap labour in Malaysia
The number of human trafficking victims rescued in Thailand is set to hit a record high this year, according to government data, with demand for cheap labour in neighbouring Malaysia causing a jump in the illegal trade.
— Malay Mail

Independence an option if Putrajaya fails to return Sarawak’s rights, says NGO
The Sarawak Association for Peoples’ Aspiration says Sarawakians are beginning to realise the importance for the state to have a say in running its affairs.
— FMT News

RAM Ratings sees June inflation surging to 1.6%
RAM Ratings expects Malaysia’s overall inflation rate to accelerate to 1.6% in June (May: 0.2%), fuelled by the low-base effects arising from the removal of the Goods and Services Tax (GST) last year.
— The Star Online

Sapa pledges full support for S’wak govt in OMO amendment
Sarawak Association for People’s Aspiration (Sapa) president Dominique Ng has pledged his full support for the Sarawak government in the amendment of the Oil Mining Ordinance (OMO). According to him, the Petroleum Development Act does not apply to Sarawak as it was never passed through State Legislative Assembly.
— The Borneo Post

88 people high on drugs nabbed at entertainment centre
Eighty-eight people who turned a family entertainment centre in Puchong into a drug joint were arrested when police raided the place late last night.Serdang district police chief ACP Ismadi Borhan said the suspects, aged between 18 and 50, included 84 Indonesians who are mostly labourers and factory workers.
— The Sun Daily

More US firms shift towards Malaysia
Malaysia can expect more US firms to establish their presence here amid the ongoing US-China trade war.
— The Sun Daily

Hannah Yeoh leads TTDI residents in saying resounding no to scaled down Rimba Kiara project
The Taman Tun Dr Ismail Residents Association (TTDI-RA) and a group of longhouse residents living on Taman Rimba Kiara, led by their MP Hannah Yeoh, gave a huge thumbs down to developing one of the city’s last green.
— Malay Mail

Ministries pledge to work together to address sale of vape to pupils
The Ministry of Education (MOE) will work with the Ministry of Domestic Trade and Consumer Affairs (KPDNHEP) to address the problem of electronic cigarettes and vape being sold to schoolchildren.theSun in a special report today highlighted concerns raised over cigarette-like candies being sold to kids.
— The Sun Daily

Implementation on noise regulations still low: Niosh
The implementation on sound regulations among employers and workers in several critical sectors in the manufacturing and construction industries in the country is still low, said National Institute of Occupational Safety and Health (Niosh) chairman Tan Sri Lee Lam Thye.
— The Sun Daily

Two men acquitted of 2016 Setapak murder of moneylender
Two men escaped the gallows after the High Court acquitted them of the murder of a moneylender who was gunned down in broad daylight in Setapak almost three years ago.
— The Star Online

Give Sarawak back its dues under MA63, group tells Putrajaya
The Sarawak Association of People’s Aspirations today reminded the federal government of the state’s full constitutional rights nearly 60 years after the signing of the Malaysia Agreement 1963.
— Malay Mail

MACC looking into ‘punitive cases’ based on AG report
The Malaysian Anti-Corruption Commission (MACC) has set up a task force to investigate cases which call for punitive action with regard to irregularities disclosed in the latest Auditor-General’s Report.
— The Sun Daily

Singapore stocks up on low-sulphur fuel ahead of new shipping rules
Under new International Maritime Organization rules, ships must reduce the sulphur content of the fuel they burn to 0.5% from the current 3.5% from January 2020.
— FMT News

PTP looking to expand free trade zone by 141.64ha
Following the increasing interest in its free trade zone, the Port of Tanjung Pelepas (PTP) is looking at expanding the area by an additional 141.64 hectares in phases over the next few years.
— The Sun Daily

I’m planning to register a startup in Malaysia. Where do I begin?
Sun SEA Capital’s ST Chua answers common questions regarding registering and starting up in Malaysia 1. What are the key factors to consider before setting up a tech business in Malaysia?
— e27

Negri Sembilan SMEs participating in Malaysia Fest at Singapore
Four small and medium-sized enterprises (SMEs) from Negri Sembilan will be taking part in the Malaysia Fest 2019, to be held July 25-28 in Changi, Singapore, as part of the state’s efforts to promote agro-based products.
— The Sun Daily

MACC releases cops, seeks remand for DPP and lawyer nabbed for brazen bribery attempt in court
Corruption investigators will be applying to hold longer a deputy public prosecutor (DPP) and a private lawyer who was arrested on suspicion of taking bribes at the Kuala Kubu Baru courthouse last week after the expiry of.
— Malay Mail

Take us seriously, Abdullah tells Putrajaya
Sarawak will not use hostile approach in negotiating to get back its rights as enshrined in the Malaysia Agreement 1963 (MA63).
— New Sarawak Tribune

Allowing Zahid to come back is proof Umno is ‘dumb and dumber’, says Kit Siang
Umno members have proved Tun Dr Mahathir Mohamad’s caustic claim that they are “dumb” and getting “dumber” by allowing Datuk Seri Ahmad Zahid Hamidi to return and lead them despite his many pending corruption.
— Malay Mail

Malaysia morning news for May 13