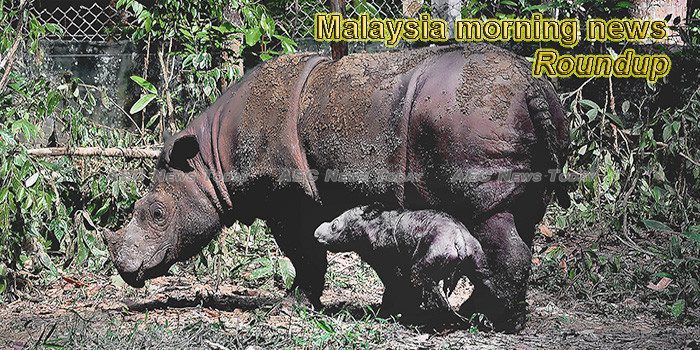 ERCL to proceed only if Malaysia can afford it
Malaysia will only proceed with the East Coast Rail Link (ECRL) project, if the nation can afford it, failing which, it would be postponed.
— New Straits Times

Will Malaysia become Southeast Asia’s clean energy leader? (commentary)
A silver lining of global warming is that it is forcing every nation to rethink its future, to open its mind to new possibilities. The latest IPCC report gives the world only 12 years to radically cut greenhouse gas emissions or condemn future generations to climate change catastrophe. There is no choice but to act.
— Mongabay

Sarawak assists implementation of BSH programme
The Sarawak Chief Minister’s Department has issued an instruction to 11 Residents, 29 District Officers (DOs) and seven Sub-District Offices to assist the Federal Treasury in the distribution of vouchers and RM300 cash payment for recipients of the Bantuan Sara Hidup (BSH) welfare programme.
— Daily Express

Dr Mahathir warns against foreign meddling in Asean
Southeast Asian countries should guard against the involvement of big powers in the region, as such meddling may fuel conflict and lead to an arms race, according to Malaysian Prime Minister Tun Dr Mahathir Mohamad.
— The Edge Markets

Ship collision at Straits of Johor not detrimental to bilateral trade with Singapore
The collision between Malaysia’s marine surveillance vessel MV Polaris and the bulk carrier ship registered in Greece, MV Pireas, will not affect Malaysia-Singapore bilateral trade amid concerns that it may further aggravate the relation between both countries.
— The Malaysian Reserve

Malaysia returns to AIME 2019 gearing up for VM2020
To continue promoting Malaysia as the preferred business events destination internationally, Malaysia Convention & Exhibition Bureau (MyCEB), an agency under the Ministry of Tourism, Arts and Culture Malaysia (MOTAC) together with 13 industry partners ranging from hotels, state bureaus and convention centres is participating in the leading exhibition for the meetings, incentives and events industry, Asia-Pacific Incentives and Meetings Expo (AIME) from February 18 to 20, 2019 at Melbourne, Australia.
— The Borneo Post

Fast-track to a global career in accounting and finance
FOR school leavers, it can be tough not knowing which university to choose and what course to enrol in. In Malaysia alone, there are many public and private universities, with hundreds of courses available. But how sure are you the path you chose is the right one for you?
— The Star Online

Malakoff in urgent need of new source of earnings, says Kenanga
Kenanga research is positive on Malakoff Corp Bhd’s acquisition of Alam Flora as it fits into the group’s long-term aspiration of venturing into the waste-turn-energy and renewable energy sectors.
— The Star Online

Gamuda dips in early session
Shares of Gamuda Bhd dipped in early session today on news that the government has begun talks with the group to acquire four highway concessions it has a majority stake in, with the aim of abolishing toll collections at these highways.
— New Straits Times

Malaysia in need of growth story
Despite being a resilient economy, Malaysia needs to find its growth narrative if it is to continue to move forward, says a leading regional economist.
— The Star Online

‘New Kuwait’ an attractive lure for Malaysian investors: Envoy
Malaysia is urged to leverage business and investment opportunities outlined within Kuwait’s 2035 Development Vision, which is currently progressing towards turning Kuwait into a trade and financial hub.
— The Sun Daily

Further recoveries ahead for AmBank
Further recoveries are expected from AMMB Holdings Bhd (AmBank) but analysts also opine that the group should not solely rely on the cost factor to sustain its earnings growth.
— The Borneo Post

Mixed sentiments on AAX’s prospects
AirAsia X Bhd (AAX) garnered mixed sentiments from analysts as they expect the airline could see recovery in its core routes while others believe oil prices and subdued passenger growth could continue to weigh down its prospects.
— The Borneo Post

Netflix Buys Malaysian Election Drama Film ‘Rise’
Malaysian drama film, “Rise Ini Kalilah” has been picked up by Netflix and will go to air from Feb. 26. The film released in Malaysian theaters and in Singapore in September.
— Variety

Anwar and Mahathir – who will blink first?
When Datuk Seri Anwar Ibrahim arrived at Unisel to give a talk ear­lier this week, he was introduced as the “eighth prime minister of Malaysia.”
— AsiaOne

Young dreams dashed as Malaysia prepares to send back 40,000 Chin refugees
Kim Lek walked and sometimes ran to Malaysia from her home in Chin State, Myanmar, at the age of 11.
— FMT