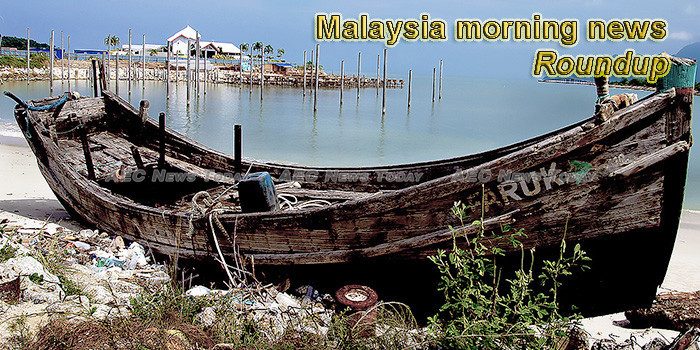 Malaysia mosque launches ‘rice ATM’ to benefit the needy
A mosque in Kuala Lumpur on Friday (Feb 15) introduced a new and novel way to offer rice to the needy – via a specially designed Automated Teller Machine (ATM).
— Channel NewsAsia

High foreign outflow due to recalibration of foreign investments, say experts
A high net foreign fund outflow of RM263.5 million was recorded between Monday to Thursday, a level last seen since the third week of December 2018, as investors recalibrated their investments due to periodic adjustment within the region this week.
— New Straits Times

Malaysian economy to continue on steady growth path: Analysts
Malaysia’s economy is expected to remain on a steady path in 2019 but with greater power due to the fiscal commitment to reduce wastages and improve the delivery system, an important ingredient to achieve a more efficient economy, according to PublicInvest Research.
— The Sun Daily

Estate owners demand WHO journal retract article against palm oil or apologise
The Malaysian Estate Owners Association (MEOA) has demanded that the World Health Organisation’s (WHO) Bulletin retract an article published last month which had painted the palm oil industry in a bad light.
— Malay Mail

M1 buyout bid finally goes through with Malaysia’s Axiata exiting Singapore investment
M1’s largest shareholder Axiata Group has accepted an offer for its stake in the Singapore telco that will see it exiting the local market and finally bring to close a buyout bid that began in September last year.
— Zdnet

Local contractors not in ‘rail’ danger, say experts
Despite doubts over the proposed East Coast Rail Link (ECRL) and the Kuala Lumpur–Singapore High-Speed Rail (HSR) projects, analysts are upbeat that the continuation of other projects will keep local contractors afloat.
— FMT

Malaysia haunted by ‘fake’ degrees
WHEN the scandal linked to the use of bogus and unaccredited degrees by politicians in the ruling Pakatan Harapan coalition was brewing, the image of my one-time boss – a tycoon in Hong Kong – immediately flashed through my mind.
— The Star Online

Shocking New Claim By PAS Leader – “I Haven’t Listened To Nik Abduh Recording”!
PAS leader Hadi Awang has today publicly told questioning media that he would not comment on the contents of the Nik Abduh tape (now acknowledged to be genuine) because he had not listened to it and does not apparently intend to.
— Sarawak Report

Ascend of the timber industry
As a country blessed with one of the oldest tropical rainforests in the world – some saying it rivals that of the Amazon – it comes to sense that Malaysia’s forests make up a crucial pillar of the economy via the timber industry and wood-related products.
— The Borneo Post

Malaysians detained in Cambodia arrive home
“I need to beg for water. Life in prison was tough. It’s a lesson to me and also for other Malaysians, to be wary and do not accept dubious job offers that promised lucrative perks and salary” said Ng Shing Long, 27, one of 47 Malaysians who were released by Cambodian government recently.
— New Straits Times

Women stamping their mark in new Malaysia’s politics
Women’s participation in politics has long been recognised as an important measure of gender equality in Malaysia.
— The Sun Daily

Author blames racism for marginalisation of Indians
A researcher who has written extensively on the plight of Malaysian Indians has described marginalised members of the community as victims of a social and political system that places undue emphasis on racial differences.
— FMT

Reasons to fall in love with Malaysia
For some, February is the month of love, thanks to Valentine’s Day and (for this year, at least) Chap Goh Meh.
— Star2