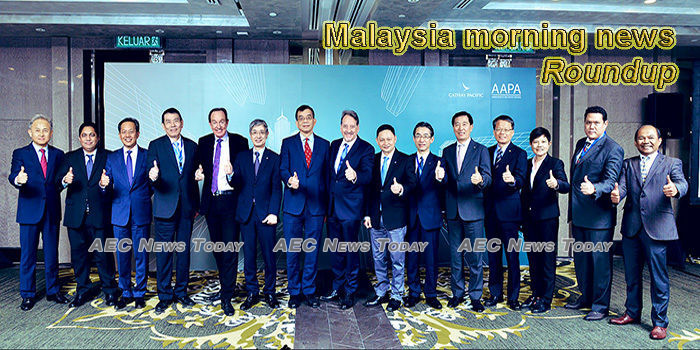 Malaysia wants to spend RM5 million to study the possibility of building a third bridge with Singapore
The third bridge between Singapore and Malaysia may not be coming so soon, but a RM5 million (S$1.6 million) study to look into its feasibility is on the horizon.
— Business Insider

Google to impose 6pc digital tax for Malaysian users from Jan 2020
Beginning January 1, 2020, Google will start charging a 6 per cent digital tax for its paid services in Malaysia. This is in line with the expansion of the Sales & Service Tax legislation in Malaysia to cover digital services.
— Malay Mail

Malaysia tops Aussie list for border alerts
Malaysians are the most common nationality of people on Australia’s list of border alerts, accounting for 11.8% of all red flags in the past year, an Australian daily reports.
— FMT

Philippines, Malaysia and Indonesia bet on space as growth engine
Asian countries are betting that the space industry will provide a new engine of growth, as the global economy sputters and government finances become overstretched.
— Nikkei Asian Review (paywall)

Urban to rural migration rate at 19.5% for 2018
The migration rate of the urban population to the rural areas last year was 19.5% and 4.8% for rural to urban areas, said Rural Development Minister Datuk Seri Rina Harun (pix).
— The Sun Daily

Malaysia’s Nov manufacturing PMI at 14-month high
Malaysia’s Manufacturing Purchasing Managers’ Index (PMI) rose to a 14-month high of 49.5 in November from 49.3 in October, attributed to an increase in new exports business, according to IHS Markit.
— The Sun Daily

Audit Report: Farmers’ subsidy and incentive scheme not managed efficiently
The Farmers Subsidy and Incentive Scheme, which is implemented to increase the country’s rice supply, is not managed prudently, efficiently and effectively, according to the Auditor-General’s Report Series 2, 2018.
— The Borneo Post

118,416 dengue fever cases nationwide as of November
A total 118,416 cases of dengue fever were reported nationwide from January until November 27, a 70 per cent increase compared to the same period in 2018, Dewan Rakyat was told today.
— The Borneo Post

Authorities to keep tabs on foreigners linked to illegal activities, says Home Ministry
The Immigration Department will continue to keep a lookout for foreigners who could be involved in illicit activities in Malaysia, the Home Ministry said today.
— Malay Mail

MOE to ensure no manipulating in procurement process
The Ministry of Education (MOE) will ensure that no one will be able to manipulate the process in the procurement for three services namely security (PKK), janitorial (KBK) and supply of cooked food (BMB) for contracts starting from Jan 1, 2020.
— New Sarawak Tribune

99 out of 113 audit certificates given without reprimand, says Auditor-General
The National Audit Department (NAD) has audited the financial statements of 113 federal agencies for the 2018 financial year as of Aug 30, this year said Auditor-General Datuk Nik Azman Nik Abdul Majid.
— The Sun Daily

MOE to ensure no manipulation in procurement process
The Ministry of Education (MOE) will ensure that no one will be able to manipulate the process in the procurement for three services namely security (PKK), janitorial (KBK) and supply of cooked food (BMB) for contracts starting from Jan 1, 2020.
— The Sun Daily

Tattoo expo organisers hauled up over half-naked models
The Malaysia Convention and Exhibition Bureau says organisers were responsible for ensuring that all events proceeded according to the rules and regulations.
— FMT News

Sports Toto gives out more than RM37m jackpot in November
November must be a very auspicious month for 17 lucky winners who walked away with more than RM37 million Sports Toto jackpot.
— The Sun Daily

Malaysia sweeps four gold on SEA Games opening day
The Malaysian contingent was on a roll on the first day of competition in the 30th SEA Games in the Philippines after securing four gold, two silver and two bronze medals.
— New Sarawak Tribune

Ringgit opens slightly lower against US dollar
The ringgit opened marginally lower against the US dollar today on lack of demand for the local note amid cautious sentiment surrounding the US-China trade negotiation, said a dealer.
— The Sun Daily

National flag incident: Cops to record IT company MD’s statement again tomorrow
Police will once again summon the managing director of a information technology consulting firm to facilitate investigation over the incident in which a Jalur Gemilang with a five-pointed star was electronically displayed at the opening ceremony of a basketball tournament, here last month.
— The Sun Daily

Claim your place and show your worth, little people advised
Little people should claim their place in society by showing their worth, the National Organisation of Dwarfs Malaysia said.
— The Sun Daily