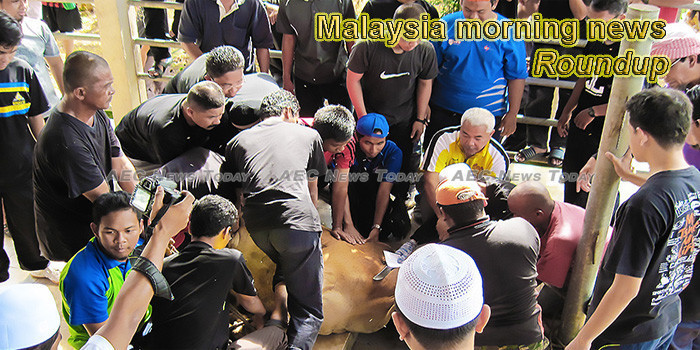 Malaysian minister capitulates on Lynas waste export condition
One of Lynas Corp’s fiercest critics in Malaysia has confirmed the country’s government will drop a requirement for the rare earths miner to export its radioactive waste from the country.
— SMH

Teen with Irish passport goes missing from Malaysian resort
A 15-year-old girl, who is an Irish passport holder, has gone missing in Malaysia, a family friend has said.
— Irish Times

Najib: Pakatan leaders must quit over unfulfilled Lynas closure promise
Former prime minister Datuk Seri Najib Razak says that MPs from Pakatan Harapan who promised to shut down the Lynas plant should resign or vacate their seats.
— The Star Online

Promote inclusive growth to benefit all in Malaysia
For people at large, especially those from lower income group to feel the benefits of economic growth, economic policies are to be `inclusive growth` oriented instead of ethnic-based.
— Eleven Myanmar

CM: RM350 mln has been settled, time for Putrajaya to fulfil promise to repair, rebuild dilapidated schools in Sarawak
The Sarawak government has paid back RM350 million to Putrajaya, which is the first phase of the RM1-billion loan repayment, said Chief Minister Datuk Patinggi Abang Johari Tun Openg.
— The Borneo Post

MOA to launch massive fruit promotion campaign
The Ministry of Agriculture and Agro-Based Industries (MOA) will launch a massive campaign to promote local fruits in foreign markets to lure more tourists in conjunction with Visit Malaysia Year 2020.
— The Sun Daily

Ministry confident of attracting more Chinese tourists, investors to Sarawak next year
The Ministry of Tourism, Arts, Culture, Youth and Sports is confident of attracting more tourists and investors from China to Sarawak next year, following a recent working visit to Chengdu, China where various collaborations were discussed with Chinese counterparts.
— The Borneo Post

PNB to strengthen ASNB’s digital footprint
Permodalan Nasional Berhad (PNB) expected to collaborate with all its 10 banking agents to place Amanah Saham Nasional Bhd (ASNB) platform on their online banking platform by end of next year.
— The Sun Daily

Minister slammed over Anwar-Azmin infighting comment
A minister was slammed for saying that foreign investors would choose other countries over Malaysia due to alleged PKR infighting between Datuk Seri Anwar Ibrahim and Datuk Seri Azmin Ali.
— The Star Online

How good KUL connections will bring tourism boom
Better connectivity between the two terminals at Kuala Lumpur international airport will be a catalyst towards drawing more tourists to Malaysia, according to airport operator Malaysia Airports Holdings Berhad.
— FMT

How Malaysian companies can take advantage of applications in the cloud
Companies are adopting the cloud for its low-cost, scalable storage, the flexibility of infrastructure on demand and to increase the speed of new application deployment.
— Backend News

MySalam: RM400 mil premium for a RM3 mil payout?
Set up an independent committee to look into the MySalam scheme and, if necessary, call it off and channel the RM2 billion to the health ministry.
— FMT News

10,000 attend launch of National Month
The launch of the National Month and Fly the Jalur Gemilang 2019 was held in a patriotic, lively and colourful gathering of about 10,000 people at Dataran Pahlawan, Bandar Hilir here last night.
— The Sun Daily

‘No cover-up on Kerinchi PPR lift incident’, says FT minister
Federal Territory Minister Khalid Abdul Samad said there would be no compromise if it was found there was negligence on the part of the parties responsible for the maintenance of the elevator that crashed at the People’s.
— Malay Mail

Maszlee: Introduction of other calligraphy styles in Malaysian schools will be considered
Education Minister Dr Maszlee Malik has expressed his readiness to consider the need to introduce other styles of calligraphy apart from khat (a form of Malay-Arabic calligraphy) or jawi writing in the school curriculum.
— Malay Mail

NUTP renews calls to abolish UPSR
The National Union of the Teaching Profession Peninsular Malaysia (NUTP) has renewed calls for the Ujian Pencapaian Sekolah Rendah (UPSR) to be abolished, as part of an effort to move away from an exam-oriented education system.
— The Star Online

Police say burst tyre behind fatal ambulance crash near Slim River
A burst tyre is believed to be the cause of the accident of an ambulance which left its driver and the female patient it was ferrying dead.
— Malay Mail