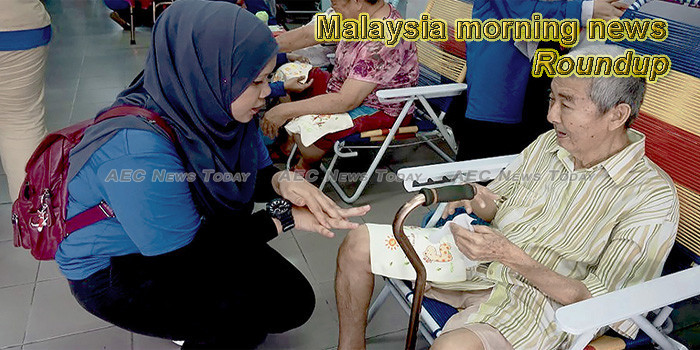 HR Ministry sets out to get socio-economic impact data on foreign workers in Malaysia
The Human Resources Ministry is initiating a study of the social and economic impact of low-skilled foreigners employed in the country as their numbers near two million.
— Malay Mail

KLK’s Q3 profit slides 65% on CPO price drops
Kuala Lumpur Kepong Bhd (KLK) posted a 65.2% decline in net profit to RM48.62 million for the third quarter ended June 30, 2019 against RM139.87 million in the previous corresponding period, due to decline in its plantation and corporate segment.
— The Sun Daily

Heineken takes portfolio approach to drive earnings
Heineken Malaysia Bhd, which posted a 14.32% jump in its earnings for six months ended June 30, 2019 (1H19), will bank on its strong portfolio of brands to drive earnings momentum for the second half of the year (2H19).
— The Sun Daily

Process of public inspection of LRT project begins
The Penang state government began a three-month public inspection process from yesterday to obtain the views of the people in the state over a Bayan Lepas-Komtar Light Rapid Transit (LRT) construction project approved by the government.
— The Sun Daily

Malaysians have a new way to spice up their love lives – rendang condoms
The new edition was released to celebrate Malaysia’s independence day and follows previous variants in nasi lemak, teh tarik and durian flavours.
— CNA

Freight Management’s Q4 earnings tumble 74.3%
Freight Management Holdings Bhd’s net profit slumped 74.3% to RM1.07 million in the fourth quarter ended June 30, 2019 against RM4.17 million in the previous corresponding period, mainly due to higher share of losses from an associate in tug and barge services and impairment of its assets.
— The Sun Daily

Thailand eyes potential growth in Sabah, says envoy
Both Sabah and Thailand stand to benefit from doing business with each other due to their strategic locations, says the Ambassador of Thailand to Malaysia, Narong Sasitorn.
— The Star Online

Police seize RM700,000 of drugs from two raids in Selangor
Police have seized over RM700,000 worth of drugs after two separate raids in Shah Alam and in Petaling Jaya.
— The Sun Daily

After jawi controversy, Kit Siang says Malaysians need to come out of shell for unity
DAP’s Lim Kit Siang today said the recent tumult over the introduction of khat in primary vernacular schools shows that many Malaysians are living in racial and religious silos.
— Malay Mail

MA63: 40% revenue, royalties require further discussion – CM
Chief Minister Datuk Seri Panglima Shafie Apdal is confident that the Federal Government is moving in the right direction towards implementing the Malaysia Agreement 1963 (MA63) in line with the demands of the State Government.
— The Borneo Post

Winners and losers in Malaysia’s Lynas tug-of-war
Australian miner Lynas recently obtained a six-month extension on its licence to operate its rare earth refinery in Pahang, sparking controversy as it has yet to remove waste containing low levels of radioactive elements.
— Malay Mail

Pos Malaysia posts net loss for fourth consecutive quarter
Pos Malaysia Bhd continued to be in the red for three months ended June 30, 2019 with a net loss of RM15.1 million compared with a net profit of RM4.98 million in the same quarter a year ago, due to lower revenue from postal services and aviation along with increased sales and operating cost of RM7.2 million.
— The Sun Daily

Mechanic’s death sentence upheld for girlfriend’s murder
The Court of Appeal here today upheld the death sentence of a mechanic for the murder of his girlfriend five years ago.
— The Sun Daily

Johor police vow no leniency towards anyone disrespecting the Jalur Gemilang
Action will be taken against those who intentionally misuse the national flag whether physically or online, Johor police chief Datuk Mohd Kamarudin Md Din said today.
— Malay Mail

Sale of white-rumped shama bird going overboard, laws needed to protect the songbird
The international trade of South-East Asia’s most popular songbird, the white-rumped shama, has led to incredible numbers of birds seized in markets in and around Malaysia, a 2018 study revealed.
— The Star Online

Welfare Dept comes to aid of Kelantan family surviving on chicken skin meals
The Kelantan Welfare Department has come to the assistance of a family in Kuala Krai who have been eating chicken skin for meals.
— The Star Online

Junction to Kuala Lumpur and Sibu? Department slams fake signboard
The State Public Works Department has deemed it necessary to issue a statement today to make it clear that Sibu and Sarikei is not accessible by road from Kuala Lumpur.
— The Borneo Post

Malaysians have a new way to spice up their love lives – rendang condoms
The new edition was released to celebrate Malaysia’s independence day and follows previous variants in nasi lemak, teh tarik and durian flavours.
— CNA

Finance Ministry: mySalam not a ‘get rich quick’ scheme
The Finance Ministry today refuted any claims that the mySalam health protection scheme is for insurance companies to reap large profits.
— Malay Mail

Consent not needed, unless checkup involves sensitive body parts says deputy minister
It is not necessary for doctors who are conducting physical examinations to seek consent from their patients before touching them, according to Deputy Health Minister Dr Lee Boon Chye.
— The Sun Daily

Utusan Melayu not closing down, publications to cost 50 sen more
Utusan Melayu (Malaysia) Berhad staff received good news today.Contrary to market talk that Utusan would cease to exist after this week, its management has confirmed that the publishing house will not be closing down.
— The Sun Daily

Selangor Umno wants unilateral conversion Bill tabled at next sitting
Selangor Umno said today it will push for the amendment to the Islamic Religious Administration Enactment (State of Selangor) to allow unilateral child conversions to be tabled in the state legislative assembly sitting in.
— Malay Mail

Sarawak’s API at moderate level
The State Fire and Rescue Department (Bomba) with the help of other agencies is still dousing the remaining peat fires around SK Kuala Baram 2 in Miri.
— New Sarawak Tribune

Over RM3 mln fine for 38 Vietnamese fishermen
Thirty-eight Vietnamese fishermen were slapped with a total of more than RM3 million in fines for illegally fishing in Malaysian waters and using fishing vessel with unknown registration numbers.
— The Borneo Post