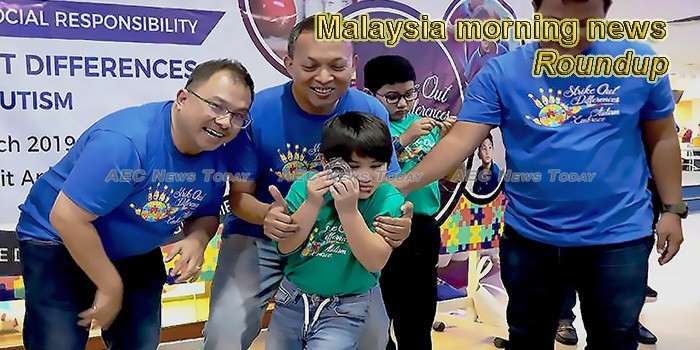 Malaysia’s former PM Najib pleads not guilty as corruption trial starts
Malaysia’s disgraced former leader Najib Razak pleaded not guilty to all charges against him on Wednesday (Apr 3) at the start of his trial over a multibillion-dollar financial scandal that brought down his government last year and sent shockwaves around the world.
— Channel NewsAsia

Malaysian Rights Panel: Police ‘Probably’ Behind Abduction of Pastor, Activist
Malaysian police agents were probably behind the abductions of a Christian pastor and an activist more than two years ago, the parliamentary-backed national human rights commission concluded Wednesday, urging state authorities to create a task force and probe what it declared as “enforced disappearances.”
— Benar News

No spike in durian prices or drop in supply with China exports
Malaysia will start exporting durians to China soon, but locals have been assured that there will still be plenty to eat and that prices will not spike.
— The Star Online

Malaysia police likely behind religion-linked abductions: Enquiry
A Malaysian human rights commission enquiry into the abduction of two people more than two years ago has found the pair was probably disappeared by the intelligence branch of the country’s police.
— Aljazeera

Malaysia to sell yacht at center of 1MDB scandal for $126M
Malaysia’s government says a luxury yacht allegedly bought with money stolen from a troubled state investment fund will be sold to casino operator Genting Berhad for USD 126 million, half its original price.
— Business Standard

Dr M: Govt is still subsidising gas, prices are low
Prime Minister Tun Dr Mahathir Mohamad has shot down appeals from the business community to reduce gas tariffs, justifying that the current gas price is low and still being subsidised by the government.
— New Straits Times

Bernas, Puspakom, Pharmaniaga, MyEG under review by government
Padiberas Nasional Bhd (Bernas), Puspakom, Pharmaniaga Bhd and MyEG Services Bhd have been identified as monopolies and are currently being reviewed by the government, according to Domestic Trade and Consumer Affairs Minister Datuk Seri Saifuddin Nasution Ismail.
— The Star Online

Divestment reaches near record levels as Southeast Asian firms streamline to compete
Companies are gearing up to divest business units to gain competitive advantage in the face of changing technology, and sector convergence, according to the EY Global Corporate Divestment Study 2019.
— The Borneo Post

The contradictions that are pulling down our nation
The problem with Malaysia is that we like to set high ideals, put up slogans, have great ambitions and draw inspiration from the successes of other countries. We looked East, essentially to Japan and Korea, during their heydays. We now want to look to China too and again I think it is due to its recent progress in various fields.
— FMT

Malaysia’s Businessmen Say Wage Hike Is ‘Unfair, Jobless Youth Unhappy With Average Monthly Offers
Malaysia still has a huge number of jobless young people and fresh graduates and while the corporate sector wants to fill in the job demand, many employers indicated that the latest wage hike is “unfair.”
— Business Times

Malaysia Morning News For May 29