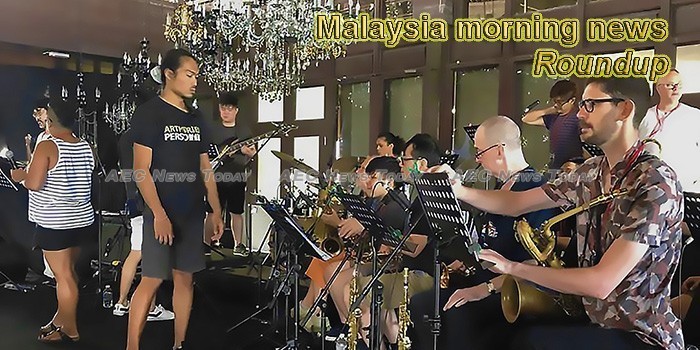 CIMB launches future of work centre, targets 15% to have digital skills by 2023
CIMB Group Holdings Bhd launched its Future of Work Centre (FOWC) to prepare its employees for a highly digitalised environment as it targets to have at least 15% of them equipped with digital skills by 2023.
— The Star Online

Trade minister defends Huawei deal, calls China tech firm transparent and not ‘forceful’
Unlike the US, Malaysia has no security concerns over its deal with Huawei, the Chinese tech communication giant that International Trade and Industry Minister Darell Leiking described in an interview with South China.
— Malay Mail

Malaysia to groom world class start-ups
Malaysia’s tech start-up community now has a home to call its own with the launch of the HLX on Thursday, an integrated innovation centre for start-ups to collaborate with corporates to get access, coaching, funding and mentoring in one space.
— The Asean Post

Malaysian and Chinese companies ink partnership on durian trading
In conjunction with the Belt and Road Forum for International Cooperation, a durian festival was held here to further promote Malaysia’s King of Fruits among the people in China.
— Malay Mail

PM moots one-stop investment centre to cut red tape, boost trade
Investors both domestic and foreign will have an easier time to open shop in Malaysia if Tun Dr Mahathir Mohamad’s idea for a one-stop centre is approved.
— Malay Mail

Poor sex education, social exclusion leading mums in Malaysia to abandon babies
The country is grappling with the problem of baby dumping as confused and fearful women struggle with various restrictions, from sex education to abortion access, and condemnation of single mothers.
— Channel NewsAsia

China’s recycling ban has sent America’s plastic to Malaysia. Now they don’t want it — so what next?
Dozens of laborers and factory operators sit hand-cuffed in rows on the pavement at an industrial park in Malaysia.
— CNN

Malaysia to learn IBS from China’s builders
MALAYSIA is bringing in Chinese builders to share their expertise in the Industrialised Building System (IBS).
— The Star Online

New Malaysia can’t afford clock-watching civil servants
The civil service makes up the backbone of a nation. It is imperative for civil servants to develop a culture that will pave the way for a dedicated, efficient and ethical service, marking the beginning of a new era of public governance.
— Malaysiakini

Malaysian durian farms seek bigger share of durian market in China
A two-day Malaysian Durian Festival was held at a hotel in Beijing to take advantage of the Belt and Road Forum taking place there.
— FMT

Dr M: Crown prince can be changed, but PMs can only be voted out
The thorny ties between Putrajaya and Johor surfaced in China today where Prime Minister Tun Dr Mahathir Mohamad is attending a symposium on the Belt and Road Initiative.
— Malay Mail

Fulfilling oil royalty promises involves treading on delicate ground
It has been a whirlwind journey for the Pakatan Harapan government in administering Malaysia since its historic victory in the 14th General Election (GE14) on May 9, 2018, when the coalition secured 113 out of 222 parliamentary seats.
— The Borneo Post

PAS to mobilise election machinery to help PBS notch victory in Sandakan
PAS secretary-general Takiyuddin Hassan says the move was to strengthen the opposition bloc which will play a check-and-balance role in Parliament.
— FMT News

Qatar Foundation Chairperson to visit M’sia
Chairperson of Qatar Foundation For Education, Science and Community Development (QF) and Education Above All (EAA), Her Highness Sheikha Moza Nasser will make a special visit to Malaysia starting from today to May 1.
— The Sun Daily

Works minister: Over RM2b needed to build and upkeep roads in Malaysia
Works Minister Baru Bian said over RM2 billion is needed for his ministry to build more roads and to upgrade and maintain existing connecting infrastructure in the country.
— Malay Mail

Perak exco to meet NGOs to explain proposed Segari Melintang park
A Perak state executive councillor said today he will meet non-governmental organisations (NGOs) to clarify his remarks that more studies are needed before Segari Melintang in Lumut can be declared a state park.
— Malay Mail

Singapore, Malaysia could explore ferry services to ease congestion at Causeway
Since the suspension of the high-speed rail project by the ruling Pakatan Harapan (PH) coalition government in Malaysia, there have been suggestions for an alternative “third link” project or more bridges to connect both countries.
— Today Online

Let us handle our own affairs, say Sabah and Sarawak legal fraternities
The Sabah Law Society and the Advocates Association of Sarawak do not want the Legal Profession Act 2019 extended to both states.
— FMT News

Malay villagers in Miri fear imminent land acquisition
A group of Malay villagers in Kampung Usahajaya Tukau near Miri held a peaceful demonstration Sunday (April 28) to highlight their fears over their fate.
— The Star Online

Survey provides input to govt — Anwar
Surveys carried out by the Merdeka Center provide input to the government on current development in the country, said Parti Keadilan Rakyat (PKR) president Datuk Seri Anwar Ibrahim. He said the surveys helped the government to see the weaknesses in the country’s administration.
— The Borneo Post

We welcome deals with China that promote fair trade, job creation, says Leiking
The international trade and industry minister says Malaysia does not share the same security concerns about Huawei as the United States.
— FMT News

Dr M to TMJ: Only the people can change the Prime Minister
Vote me out if you want, says Tun Dr Mahathir Mohamad in an apparent response to Tunku Mahkota Johor Tunku Ismail Ibni Sultan Ibrahim’s statement that the prime minister should be changed.
— The Star Online

Bernama Editor Adnan Jahaya dies
Bernama editor Adnan Jahaya died today at the Tuanku Fauziah Hospital in Kangar, Perlis. He was 58.He is survived by a widow, Hasnah Hashim and two sons Ahmad Helmi and Abdul Razak.His brother Azrulhisham Jahaya said Adnan died of a heart attack at about 11.40am.
— The Sun Daily

Selangor MB inspects Taman Keramat flats after cracks appear on building
Selangor Mentri Besar Selangor Amirudin Shari went to the ground today to see for himself the situation at Block F of the Taman Keramat  Permai Apartment where its occupants have been ordered to evacuate.
— Malay Mail

Nurses play important role in patient care
Nurses are learning soft skills such as communication to help them deal with patients, according to University Malaya Specialist Centre (UMSC) director of nursing Zurainawaty A. Rahman.
— The Sun Daily

Report: Star Media Group left in lurch after CEO-designate rejects post
The Star Media Group Bhd will not have a chief executive officer any time soon after the man designated to take over from Datuk Seri Wong Chun Wai changed his mind at the last minute.
— Malay Mail