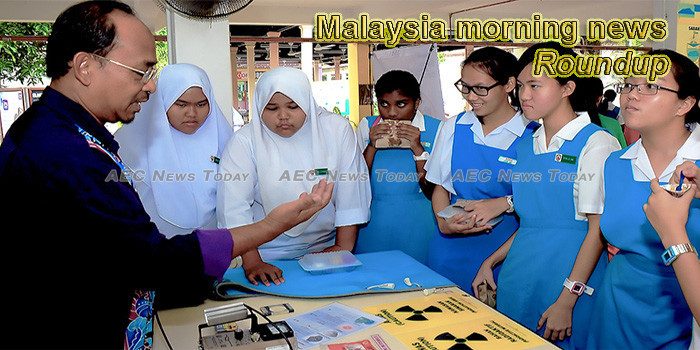 Malaysia to roll out Tesla-like battery for electric vehicles by 2020
Malaysia will become the first country in Asean to produce lithium ion battery in the next 18 months.
— New Straits Times

Third national car can put Malaysia at forefront
The third national car project provides an opportunity for Malaysia-based companies to be at the forefront of the global automotive industry evolution, according to industry watchers.
— The Borneo Post

Does Malaysia need hate speech laws?
EIGHT months after the historic results of the 14th General Election, the colonial-era Sedition Act is still alive and well.
— The Star Online

Malaysia open to talks if Goldman pays $7.5 bln, minister says
Malaysia’s finance minister said on Friday the government would be ready to discuss dropping criminal charges against Goldman Sachs linked to the 1MDB scandal if the bank pays $7.5 billion in reparations.
— Yahoo news

Icy Malaysia-China relations set to thaw
A RECENT explosive report by the Wall Street Journal (WSJ) “revealing” China’s attempt in 2016 to bail out troubled 1MDB in exchange for projects in Malaysia can potentially deal another blow to Malaysia-China bilateral relations, but both countries have adopted a calm approach towards these “expose”.
— The Star Online

Westports’ growth prospects dented by alliances reshuffling
Westports Holdings Bhd (Westports) has garnered neutral views from AmInvestment Bank Bhd (AmInvestment Bank) given that the group has been affected by the recent reshuffling in global shipping alliances.
— The Borneo Post

Malaysia to Focus on Health Not Criminality in New Drug Policy
Malaysia’s new strategy to combat drugs will focus on health and social support for users rather than enforcing criminal laws.
— Bloomberg

Malaysia mulls curfew for under-18s
Malaysia is considering imposing night-time curfews on young people under 18 years of age in a bid to protect them from negative influences such as drugs.
— Bangkok Post

Scomi units in RM36.15m default
Scomi Group Bhd’s sub-subsidiary Urban Transit Private Limited (UTPL) and subsidiary Scomi Engineering Bhd (SEB) have each received a notice of demand from India’s Axis Bank Limited for 624.63 million rupee (RM36.15 million) due to failure by UTPL (as borrower) and SEB (as guarantor) to pay under the bank facilities granted to UTPL.
— The Sun Daily

For Malaysia, IAACA has bigger role to play in fight against corruption
Malaysia believes it is time for the International Association of Anti-Corruption Authorities (IAACA) to play a bigger role in the worldwide fight against graft.
— Yahoo news

Lower returns by EPF in 2018 likely
It’s that time of the year again when the much-awaited dividend rates of the Employees Provident Fund (EPF) will be announced.
— The Star Online

Malaysia man arrested for slapping doctor who refused to give wife MC
A 38-year-old man in Malaysia was arrested on Sunday (Jan 20) after he slapped a doctor for refusing to issue a medical certificate (MC) to his wife.
— Channel NewsAsia

Malaysians can finally add ‘boyfriend’ to cart this season
The phenomenon of renting fake girlfriends or boyfriends for Chi­nese New Year began in China a number of years ago and has now landed on our shores.
— Eleven Myanmar