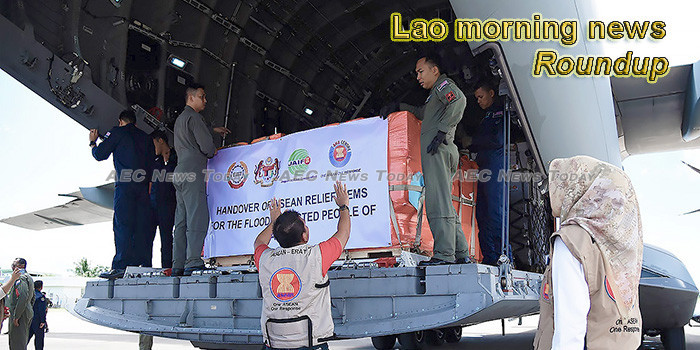 Flooding in Laos’ Southern Provinces Displaces 100,000, Kills at Least 28
More than 580,000 people have been impacted and at least 28 have died in floods caused by heavy rains over the past two weeks in Laos’ southern provinces, according to estimates revised during a cabinet meeting this week. The death toll figure was reported by the Vientiane Times Thursday.
— RFA

VietinBank Opens Laos Headquarters in Vientiane
Vietnam Joint Stock Commercial Bank for Industry and Trade (VietinBank) has inaugurated the headquarters in the Lao capital Vientiane, a move that comes amid increasing cooperation between Laos and Vietnam in the banking and finance sectors.
— The Laotian Times

Laos, China to stage joint technology expo
The expo at the National Convention Centre will serve as a platform for the two countries’ science and technology sectors under the theme “Fostering Smart Technology Application to Achieve the Goal of Industrialisation and Modernisation”.
— ANN/Vientiane Times

Vietnamese and Lao provinces enhance cooperation
Leaders of the two provinces informed each other of their socio-economic developments and the coordination in maintaining security and order and protecting the border, and also reviewed the results in the cooperation in all fields between the two localities in the recent years.
— Nhan Dan

Alleged drug gang money-launderer arrested
An alleged money-launderer for a Lao drug network has been arrested in Mukdahan province, with police claiming he “washed” more than 200 million baht over a four-month period.
— Bangkok Post

Receiving spiritual gifts of Luang Prabang, Laos
I step out from a dark alley into the dimly lit street. The pavement is still glistening from last night’s rain as I make my way towards the main road.
— Kamloops This Week

Vietnamese and Lao provinces enhance cooperation
Leaders of the two provinces informed each other of their socio-economic developments and the coordination in maintaining security and order and protecting the border, and also reviewed the results in the cooperation in all fields between the two localities in the recent years.
— Nhan Dan