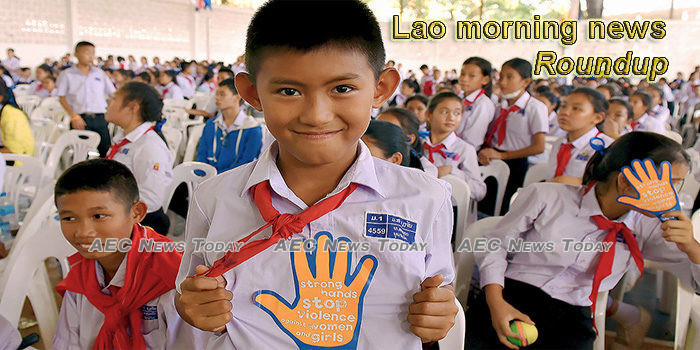 Teen appeals to UN for help in Lao children’s education
AFTER Greta Thunberg and Malala Yousufzai, a youngster from Laos was among nine teens who captured the world’s attention after giving an address at the United Nations (UN), recently.
— New Straits Times

Thirteen houses hit by magnitude 6.4 earthquake in Xayaboury
Fortunately only two people were slightly injured during the quakes.
— ANN/Vientiane Times

Lao National Assembly endorses report on land concessions
After hearing the report, Assembly members exchanged views on the subject with some saying there must be clearly-defined measures to penalise contract violators in line with laws and regulations.
— ANN/Vientiane Times

Asean meeting calls for greater protection of vulnerable children’s rights
Breaking the barriers of human resource development and building accessible facilities for children, the elderly, persons with disabilities and vulnerable groups of people are essential to promoting equal rights and accessibility as well as ensuring that no one is left behind.
— ANN/Vientiane Times

Laos Proposes ASEAN Plus Three Continue To Support Building Institutional Capacity
Laos has proposed ASEAN Plus Three continue providing necessary supports in building the capacity of institutions in charge of promotion and protection of children, the elderly and persons with disabilities.
— KPL

New history written as the gospel spread through the successful 100,000 Graduation Ceremony at Shincheonji
An unprecedented event of the world – Increase of 100,000 congregation members in one year.
— KPL

Tornadoes, Earthquakes and Money – This Week in Lao Social Media
The Laotian Times brings our readers a round-up of some of the most shared topics this past week, based on reach and engagement on Facebook. From tornadoes and earthquakes to fintech advances and vocal parliament members, this list summarizes the types of content that are wildly consumed on Lao social media.
— The Laotian Times

This week’s Lao morning news feature photo focus on International Day for the Elimination of Violence against Women, November 25.