Lao morning news for May 29 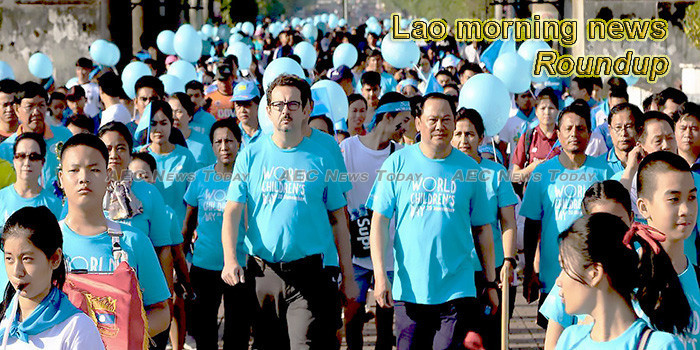 Xepian-Xe Namnoy Saddle Dam Collapse Is Not Force Majeure, Says A Report
The findings of an investigation conducted by a panel of professional and independent experts have suggested that the root cause of the saddle dam D of the Xepian- Xe Namnoy hydropower project is not force majeure.
— KPL

China, Laos ink deal on business development
The Lao National Chamber of Commerce and Industry (LNCCI) and the All-China Federation of Industry and Commerce (ACFIC) have inked a cooperation agreement that formalizes the close working relationship between the two organizations in the future.
— China.org.cn

Lao Dam Collapse Due to Use of Soil: Water Experts
Poor construction methods, with soil used in place of concrete, caused a fatal hydropower dam collapse last year in Laos, a panel of water experts has concluded, prompting a rejection of its findings by the South Korean firm that built the project.
— Radio Free Asia

Gov’t, UNICEF Conclude Series Of Children, Youth Consultations
Young representatives from central provinces are gathering in Vientiane Capital to propose solutions to overcome challenges in the realization of their rights as part of the activities planned to mark the 30th Anniversary of the Convention on the Rights of the Child (CRC).
— KPL

Cambodian NA President Pay Officials Visits to Vietnam and Laos
Samdech Akka Moha Ponhea Chakrei Heng Samrin, President of the National Assembly of Cambodia, and his spouse departed here this morning for the official visits in the Socialist Republic of Vietnam from May 28 to 30 and in the Lao People’s Democratic Republic from May 30 to June 1.
— AKP

Capital to plant trees on 300 hectares this year
Vientiane is making a strong contribution to the country’s efforts to restore forest cover to 70 percent of the total land area by the end of next year, a forestry official has said.
— Vientiane Times

Children speak up for their rights at forum
The National Commission for the Advancement of Women, Mothers and Children (NCAWMC) and UNICEF yesterday launched a forum aimed at enabling children and young people around the country to express their voices concerning the problems they face.
— Vientiane Times (paywall)

Uncovering the real story of the MIA/POW in Laos, Cambodia & Thailand
Anyone who knows anything about the Vietnam war knows that there was a lot of unofficial action by US/”allied” forces in both Laos and Cambodia.
— ATS

Universities prepare for new student intake
Close to 10,000 students will receive an offer of acceptance to study at Lao universities during the 2019-2020 academic year, estimates reveal.
— Vientiane Times (paywall)

Young Lao competitors to flex muscles at bodybuilding world championship
The Lao Bodybuilding Federation is turning its attention to up and coming athletes as it develops the national squad for domestic and international events this year.
— Xinhuanet