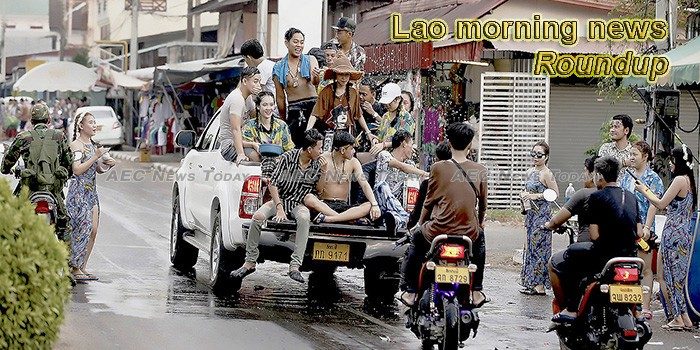 Lao Front committee bolsters support for development process
The Committee of the Lao Front for National development is meeting in Vientiane to summarise its most recent activities and outline plans in support of its role to boost solidarity and encourage the people of Laos to support the country’s development.
— Vientiane Times

Lao government considers tax to protect environment
INDUSTRIES that produce pollution may have to pay more taxes now that the Lao government has embraced the National Green Growth Strategy.
— The Phnom Penh Post

Laos conducts tourism campaign in Shanghai
The Lao government has taken several steps to make it easier for Chinese nationals to visit Laos, such as reducing the visa fee from US$14 to US$10, said Minister of Information, Culture and Tourism, Prof. Dr Bosengkham Vongdara recently.
— Vientiane Times

Research Making A Difference: Laos, Australia Celebrate More Than 25 Years Of Partnership To Improve Farmer’s Livelihoods
Laos and the Australian Centre for International Agriculture Research (ACIAR) are celebrating more than 25 years of successful collaboration on agriculture research this week in Vientiane.
— KPL

In Khao Noodle, Old East Dallas Gets a Hub For Laotian Food
Donny Sirisavath gives honor to his mother’s recipes at his small new noodle shop. You want to hear his story.
— D Magazine

A Design Lover’s Guide to Cambodia and Laos
There’s a tendency to assume a certain sameness among Southeast Asian countries—after all, the saying is “same same,” with the “but different” usually being left off. But though they’re close neighbors and are very easily paired on one excursion to the region, Cambodia and Laos, specifically the culture-rich temple havens of Cambodia‘s Siem Reap and Laos’s Luang Prabang—musts for anyone intrigued by ancient civilizations and exotic design—are quite distinctive.
— Architectural Digest

Thailand offers loans for Cambodia, Laos, Myanmar and Vietnam entrepreneurs
The government’s Peace Commission has focused on informal talks with armed ethnic groups to move the peace process forward, amid a lack of substantive progress since the National League for Democracy (NLD) came to power in 2016.
— Myanmar Times

Lao Morning News For May 21