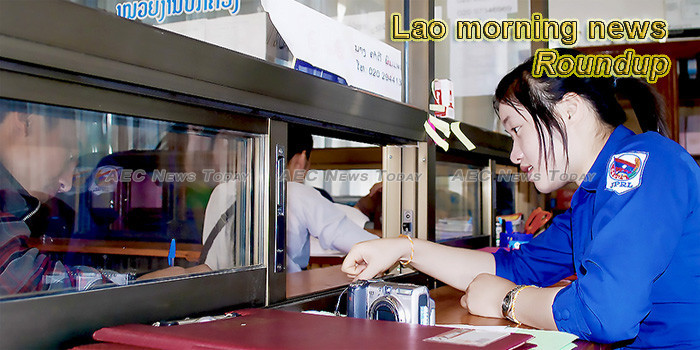 Can Laos manage its debt to China?
Laos’ economy is growing, but without outside assistance, the country cannot compete with its ASEAN neighbours.
— Asean Today

Archaeologists discover more giant stone jars used to store the dead in Laos
It is an archaeological mystery that has perplexed scientists for decades: which ancient civilisation carved huge stone jars for disposing its dead at sites across Laos?
— ABC News

Villagers Brace For Resettlement Amid Signs Laos Wants to Build Another Mainstream Mekong Dam
Bufflaloes wallow in the shallows of the Mekong River, where farming villages cling to sandy banks and the occasional boat chugs against the current, carrying goods and passengers from the former royal Lao capital of Luang Prabang.
— RFA

Laos govt aims to maximise revenues from tourism campaign
The government recently advised the Ministry of Information, Culture and Tourism to work with other ministries to promote tourism and generate more revenue for the state budget.
— ANN/ Vientiane Times

Govt speeds up power grid investments for electricity distribution in Laos
The Ministry of Energy and Mines has said that seven construction and installation projects related to the national power grid will be completed in the last three quarters of this year.
— ANN/ Vientiane Times

Commerce ministry addressing undocumented foreign businesses
The Ministry of Industry and Commerce is on a mission to address the number of foreign-owned businesses which have opened their doors without the proper operating permit.
— Vientiane Times

A Long Road: Access to Justice in Laos
When her father died suddenly last year, the family of Mrs. Somleuthai (her name has been changed for privacy) started to break apart.
— The Asia Foundation

Over 60 percent of Tanmixay-Sikeuth road upgrade completed
The contractor rebuilding the 9.4-km road running from Tanmixay crossroads in Xaythany district to Sikeuth junction in Naxaithong district of Vientiane has confirmed the work will be completed by the end of this year.
— Vientiane Times

Making an impact in the villages of Laos
Laos is a landlocked country with a significant rural population.
— The Oshawa Express

In Laos, Women Rule Rugby
Aeng Khang understood at an early age that playing any sport, much less one as raucous as rugby, would be nearly impossible for girls from her remote village in Laos.
— The New York Times

Lecturers, students tackle development issues in NUOL quiz
Winning National University of Laos (NUOL) lecturers and students who competed for cash in a quiz titled “What should poor people do to better themselves?” received their prizes on Wednesday.
— Vientiane Times

Laos: Solar power helps farmers in Attapeu save on electricity payments
Attapeu province is forging ahead in the race to use the sun’s rays to power an irrigation system.
— ANN/ Vientiane Times