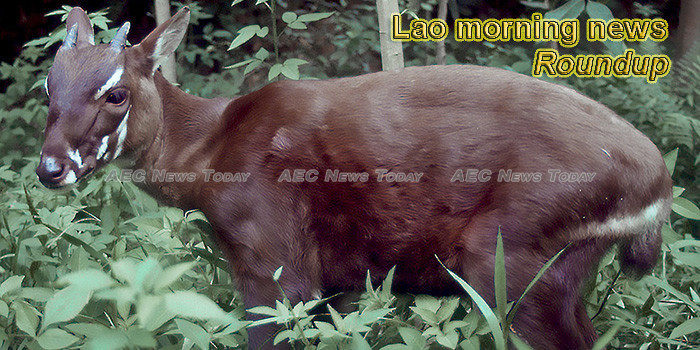 Dengue Kills 25, Infects Over 10,000
Over 10,700 people across the country have been infected with dengue virus, with Champassak hard hit with 2,416 infection cases and five deaths reported since the beginning of January, according to the Ministry of Health.
— KPL

Laos highway projects to boost Asean travel
Travelling across Asean is likely to get easier thanks to the Lao government’s plan to build an expressway and three motorways covering more than 1,700 kilometres which will link the country with China and Vietnam.
— Bangkok Post

Vientiane labour officials mull foreign worker regulation
Vientiane authorities have ordered all district departments to continue registering foreign workers and issuing them with work permits and other documents to ensure they comply with regulations for seeking employment in Laos.
— Vientiane Times (paywall)

Nation needs to seize opportunities offered by Laos-China railway
The government has acknowledged that it needs to be well prepared to provide transit services in an effort to benefit from the Laos-China railway.
— Vientiane Times

Young entrepreneurs ask for Lao Front’s help to remove business barriers
Members of the Young Entrepreneurs Association of Laos (YEAL) have called on the Lao Front for National Construction to urge the government to remove barriers to doing business and address long-standing issues.
— ANN/ Vientiane Times

Govt developing legislation on private school fees
The government is preparing legislation to regulate the setting of school fees and other payments at private education institutes throughout the country.
— Vientiane Times (paywall)

Public support for planned Vientiane expressway
Vientiane authorities say that almost everyone who will be affected by the Vientiane Expressway No. 1 project supports its construction, as they recognise the benefits it will bring.
— Vientiane Times

Dengue Fever on the Rise across Laos
Dengue fever is on the rise in Laos this year, with hospitals reporting an increase in the number of patients.
— The Laotian Times

National workshop supporting women entrepreneurs with ICT training
Women entrepreneurs, government officials and development partners are meeting in Vientiane to discuss the use of information and communications technology (ICT) in supporting local businesses to connect with customers and support growth.
— Vientiane Times (paywall)

FEATURE: Not many students interested in construction work or carpentry
In today’s world, it is essential to develop the skills of youngsters and create jobs for them. For these reasons, vocational schools are popular in neighbouring countries such as China, Vietnam and Thailand.
— ANN/ Vientiane Times