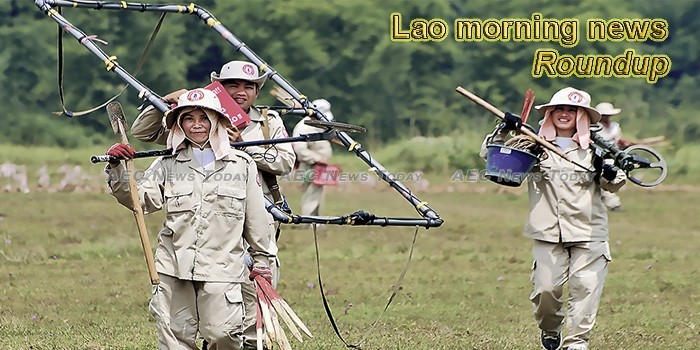 Lao govt to strive for imports, exports to value US$11.29 billion in 2019
The government will strive to achieve imports and exports of more than US$11 billion this fiscal year, including exports of US$5.516 billion and imports of US$5.775 billion.
— ANN/ Vientiane Times

MOU SIGNING Thai, Lao central banks enhance cooperation
The Bank of Thailand and the Bank of Laos PDR have signed a memorandum of understanding (MOU) on cooperation in the areas of financial innovation and payments systems in Chiang Rai yesterday after the meeting of the 5th Asean Finance Ministers’ and Central Governors’ Meeting and related meetings in Chiang Rai yesterday.
— The Nation

Luang Namtha folk make way for Laos-China railway
Families living in Luang Namtha province, through which the under-construction Laos-China railway will pass, are united in their approval of the project and are ready to embrace the development opportunities that will come their way.
— Borneo Bulletin

Laos accelerating efforts to facilitate trade: DPM
Laos is in need of intensive cooperation amongst all parties concerned to promote various key measures to boost its world ranking in ease of doing business after the government was unable to meet its target.
— ANN/ Vientiane Times

Water Supply, Sanitation, and Hygiene for Improved Nutrition
Many communities in Lao PDR, especially those in poor or rural areas, do not yet have improved access to water supply and sanitation.
— Reliefweb

Carrying the pain of unexploded ordinance in Laos
Every time Lao Keu walks, pain shoots up her right leg. If she walks or stands too long her leg becomes numb and begins shaking, and she needs to rest.
— Child Fund Australia

Flying In: Singapore’s Scoot Swoops Into Laos’ Vientiane, World Heritage Listed Luang Prabang
Flying from Singapore to Laos and beyond just got easier after Scoot launched its inaugural flights from the city-state to the jewel of the Mekong.
— The Laotian Times

Farmer Benefits from project participation in Laos: Case Study from Luang Prabang
Located an hour out of town in Luang Prabang on the way to Kuang Si waterfall is Ban Phaksi, a beautiful village surrounded by turquoise streams and rivers sourced from the magnificent falls themselves, a popular tourist attraction in northern Laos.
— Mekong Livestock Research

Hung Kings to be commemorated in Laos
The death anniversary of the Hung Kings, the legendary founders of Vietnam, will be observed in the Lao capital city of Vientiane on April 5-6.
— Vietnam Plus

Goal 18: Lives Safe From Harm
Lao PDR has the distinction of being one of the most heavily bombed nations in the world.
— UNDP

Vientiane Times makes huge strides in 25 years
The Vientiane Times has moved determinedly forward and upheld its mission to supply information to the public in a timely and responsible manner, using multimedia platforms to better serve its growing readership in Laos and overseas.
— Vientiane Times