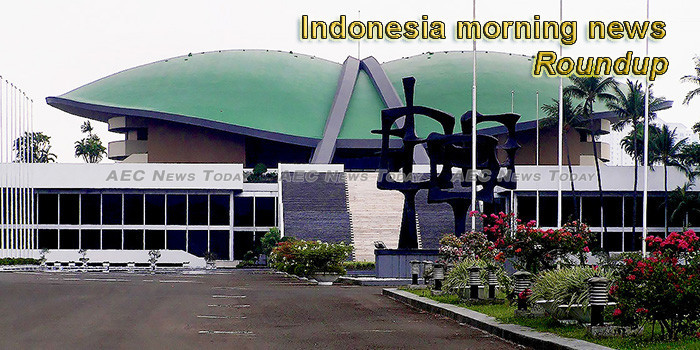 Indonesia posts $85.1 million surplus in August on steeper fall in imports
Indonesia posted a trade surplus of US$85.1 million in August in a reversal from the trade deficit it recorded the previous month, according to the latest data from Statistics Indonesia (BPS).
— The Jakarta Post

RM1 suit against Indonesia
SOUTHEAST Asia is sadly experiencing its predictable annual haze crisis yet again. We don’t have to reiterate its harm to human health, our economy and children’s education across the region, all of which are easily understood and clearly felt.
— New Straits Times

4-month-old baby dies in Indonesia, officials say respiratory infection from forest fire haze likely cause
A four-month-old infant reportedly died in the city of Palembang, South Sumatra yesterday, with the suspected cause of her death being haze from forest fires that have choked the region.
— Coconuts

Jokowi ready with bold reform agenda to lure foreign investment
The government is out to streamline its sprawling and infamously complicated regulations, as President Joko “Jokowi” Widodo looks to kick-start his second term with a bold reform agenda.
— The Jakarta Post

Government does about-face on onshore data storage plan
The government has canceled its plan to force private sector actors to store data onshore so as to ensure a favorable business climate for the burgeoning digital economy but is still looking at measures to ensure Indonesians’ data is secure.
— The Jakarta Post

Ministry of Trade Talks about Halal Animal Import Law
The Ministry of Trade announced the details of its Trade Minister’s Regulation No.29/2019 that went viral for its contents that most deemed controversial as the regulation did not oblige animal import products to be fitted with the halal label.
— Tempo.co

Indonesia strives to set example as home of ASEAN secretariat
Among the 10 ASEAN member nations, Indonesia is characterized as being a founding member of ASEAN, home of the ASEAN secretariat, ASEAN’s only G20 member and the world’s largest Muslim-majority nation.
— The Korea Times

Thousands of Luxury Cars in Jakarta in Tax Arrears
Over a thousand cars categorized as luxury cars in the Jakarta area are reportedly in tax arrears amounting to Rp2.4 trillion.
— Tempo.co

New hope to end child marriage after House agrees to raise minimum age
A new hope to curb child marriage in Indonesia is emerging as the House of Representatives has finally agreed to increase the minimum marriageable age of women from 16 to 19.
— The Jakarta Post

Jayawijaya district govt says it is not responsible for returnees
The Jayawijaya district government said it accepts no responsibility to send the students, who had returned home in the aftermath of the alleged acts of racism against native Papuan students in Surabaya, back to the provinces where they are studying.
— Antara News

‘I have chosen not to respond’: Human rights lawyer breaks silence after being charged by police
Human rights lawyer Veronica Koman has finally broken her silence on accusations surrounding her alleged involvement in a series of protests in Papua staged in response to alleged racial abuse against Papuan students in Surabaya, East Java.
— The Jakarta Post

House to approve new KPK leaders at Monday’s plenary session
The Indonesian House of Representatives (DPR) is scheduled to approve five commissioner candidates of the Corruption Eradication Commission (KPK) to become new leaders of the anti-graft body at a plenary meeting on Monday.
— Antara News

Jakarta eyes more bike lanes to support cyclists, curb air pollution
The Jakarta administration has planned to expand bicycle lanes of up to 65 kilometers long as part of efforts to encourage more people to pedal their way around the city and to ease traffic gridlock as well as the worsening air pollution amid critics from cyclists over the poor facilities for them in the capital.
— The Jakarta Post

Jokowi urges young entrepreneurs to look beyond consumption and toward production
With more and more Indonesians entering the middle class and affluent consumer (MAC) demographic, President Joko “Jokowi” Widodo is urging young entrepreneurs to drive the efforts to turn Indonesia into a global production hub, instead of stopping at mere consumption.
— The Jakarta Post

Safety first: Airlines cancel flights due to smog, limited visibility
As the government scrambles to minimize the disruptions caused by land and forest fires in Sumatra and Kalimantan, several major airlines have canceled flights affected by limited visibility due to the thick smog permeating the airspace.
— The Jakarta Post

After the bomb: Survivors make peace with past, convicted terrorists
Josuwa Ramos was in the middle of his afternoon shift when a truckload of explosives blew up in front of his workplace, the Australian Embassy on Jl. HR Rasuna Said in Kuningan, Central Jakarta, on Sept. 9, 2004.
— The Jakarta Post

Indonesian singer Tiga Setia Gara says she’s been abused by husband in the US in viral plea for help video
Indonesian diplomats in the US have been alerted to possible domestic abuse suffered by an Indonesian celebrity in Ohio.
— Coconuts

They joke about traffic accident before getting into one, killing three of them
The last road trip Tohir Rohjana, 22, took with his three friends did not end well for him.
— The Jakarta Post

Stigmatized and ostracized, patients live in Tangerang leper colony
Stigmatization and discrimination have forced people with leprosy to leave their families or hometowns and settle in a colony in Tangerang, Banten, where the inhabitants support each other.
— The Jakarta Post