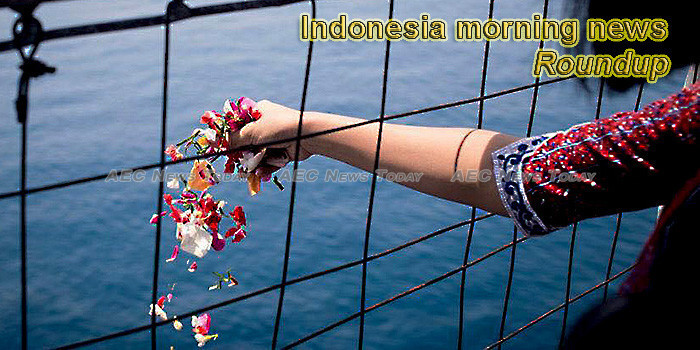 Indonesia Suspends Nickel Ore Exports With Immediate Effect
Indonesia suspended exports of nickel ore with immediate effect after a planned ban on shipments from the beginning of next year led to a rush to beat the deadline.
— Bloomberg

Study finds unsafe lead concentration in paint on playground equipment
The bright and colorful playground equipment and toys in Jakarta’s parks and green spaces may pose a danger in the long term, as a study has revealed that most of the paint used on the equipment contains a high level of lead that can be dangerous if it accumulates in the human body.
— The Jakarta Post

World’s most expensive bank cuts back on water to trim costs
Weeks after Armand Wahyudi Hartono became the vice president director of Indonesia’s largest non-state bank, he noticed how staff were leaving half-empty glasses of water after work.
— The Jakarta Post

MSMEs struggle to understand, comply with halal certification
As the country’s Halal Product Guarantee Law took effect last week, some micro, small and medium enterprises (MSME) in the food and beverages (F&B) sector were still in the dark about the new regulations.
— The Jakarta Post

Property developers told to think ‘outside the box’ amid growing sharing economy
Property consulting company Savills Indonesia has urged property developers to think “outside the box” in response to the rapidly growing sharing economy, which is expected to influence rent and housing prices in major cities in the foreseeable future.
— The Jakarta Post

House to Hold Fit and Proper test for Idham Azis as Next Top Cop
The House of Representatives (DPR) will soon carry out a fit and proper test for National Police chief candidate Comr. Gen. Idham Azis.
— Tempo.co

State miner Bukit Asam profit falls 22% as coal prices drop
Publicly-listed state coal miner Bukit Asam booked a net profit of Rp 3.1 trillion (US$220.3 million) in the January-September period of this year, a 21.8 percent decrease from the same period last year, although there was a sales increase due to a decline in coal prices and rising costs.
— The Jakarta Post

Jakarta administration, residents join forces to promote electric vehicle use
A lukewarm welcoming sun unfolded a section of Jl. Jenderal Sudirman at the Senayan traffic circle in South Jakarta, where hundreds of electric vehicles of different types and colors lined up in the middle of the road on Sunday afternoon in an event aimed at promoting electro mobility amid persistent poor air quality in the capital city.
— The Jakarta Post

Big plans ahead for Gojek post-Nadiem, from IPO to international expansion
For Gojek, having grown from a delivery call center with 20 motorcycle taxi (ojek) drivers in Jakarta to a US$10 billion technology company backed by heavyweights Google, Tencent, Visa, Astra within nine years, the only constant is change.
— The Jakarta Post

President Jokowi’s Promises to Papua
President Joko Widodo, or Jokowi, promises to continue prioritizing Papua and West Papua’s infrastructure development for the next five years, a full length of his final term in office as President.
— Tempo.co

Indonesia and Morocco share views on fight against terrorism
The National Counterterrorism Agency (BNPT) of the Republic of Indonesia and the Ministry of Home Affairs of the Kingdom of Morocco have signed a Memorandum of Understanding (MoU) on cooperation in combating terrorism.
— Antara News

New Administration, New Hope for Geothermal Energy?
A decision by Perusahaan Listrik Negara, or PLN, the state utility company, to ink a new investment deal for a coal-fired power plant in Suralaya, Cilegon, this year has raised some eyebrows.
— Jakarta Globe

Indonesia adopts wait-and-watch stance after Baghdadi’s death
Indonesia is keeping a close watch on the situation in Syria as it develops after the death of ISIS armed group leader Abu Bakr al-Baghdadi.
— Antara News

Batik Air Flies to Timika, Govt Reminds of Safety Issues
The Transportation Ministry has responded positively to the inaugural flights of PT Batik Air Indonesia, which are direct flights from Jakarta and Makassar to Timika’s Mozes Kilangin Airport in Papua.
— Tempo.co

Youth Pledge Day: AJI to Join Students’ Rally
In conjunction with the commemoration of the Youth Pledge Day on October 28 or “Sumpah Pemuda”, the Alliance of Independent Journalists’ (AJI) Jakarta chapter will join the students’ rally in Central Jakarta.
— Tempo.co

South Sumatra police urges Indonesian youth to join drug war
South Sumatra Police Chief Inspector General Firli Bahuri appealed to the youth to partake in a ceaseless war against addictive drugs since they are some of the most susceptible targets of drug traffickers.
— Antara News

In the Halloween spirit: Jakartans explore ‘haunted’ spots in capital
As Halloween draws near, Jakartans’ thirst for everything horror seems to be growing bigger.
— The Jakarta Post

Pushbike race brings children back to nature
As a dry wind blew on Saturday morning in the Kandank Jurank Doank park and nature school in Ciputat, South Tangerang, the wheels of pushbikes could be heard rolling on the pavement while children squealed gleefully. Some toddlers clung to their parents.
— The Jakarta Post

Puan Maharani: Gibran Has Chance to Run for Solo Mayoral Election
The PDIP central executive board (DPP) chair Puan Maharani said that President Jokowi’s son Gibran Rakabuming still has a chance to be a mayoral candidate for Solo from her party.
— Tempo.co