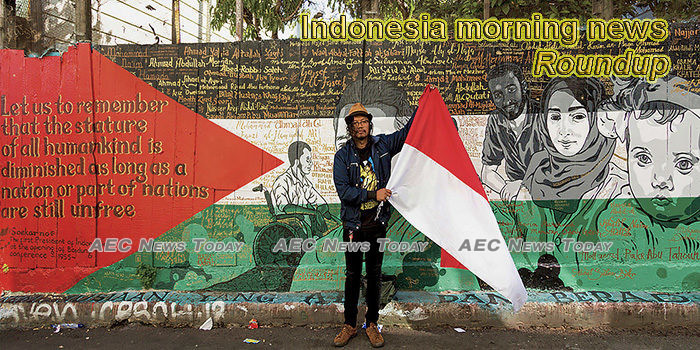 Indonesia among most improved in terms of prosperity with world’s highest levels of volunteering: Report
Indonesia is among the top five most improved countries in terms of prosperity in the world, with an exceptional ranking in social capital, as the country has the highest levels of civic and social participation in the world, a new report highlights.
— The Jakarta Post

Indonesia fires emitted double the carbon of Amazon fires, research shows
Fires from land and forest fires across Indonesia this year have pumped at least 708 million tons of greenhouse gases into the atmosphere — almost double the emissions from the fires that swept through the Brazilian Amazon this year.
— Mongabay

Indonesia set to penetrate US pineapple market
Indonesia is ready to export fresh pineapples to the United States following the completion of pest risk assessment of the country’s produce by the US Department of Agriculture (USDA).
— Antara News

Indonesia has to get its act together to benefit from trade war: Fitch
The trade tensions between the United States and China have dragged down global economic growth and resulted in the relocation of many production facilities.
— The Jakarta Post

DPR Questions Urgency in Issuance of Anti-terrorism Decree
The House of Representatives’ (DPR) Commission II plans to question the government on its reasons for issuing the Government’s Decree No.77/2019 in preventing terrorism and protection for its investigators, prosecutors, judges, and prison employees.
— Tempo.co

Energy Ministry proposes revision of price formula for subsidized diesel
The Energy and Mineral Resources Ministry has submitted a proposal to the Finance Ministry on increasing the government payout to subsidized diesel distributors Pertamina and AKR Corporindo, so that the two companies would not incur l osses from distributing subsidized fuel.
— The Jakarta Post

Nigeria studies Family Hope Program
The presence of a delegation from Nigeria to study the Family Hope Program (PKH) implemented by the government proves that the program is successful, especially in reducing poverty, Social Minister Juliari Peter Batubara has said.
— Antara News

Gold demand surges as people turn to bullion to protect wealth
Gold sales in Indonesia have increased sharply this year as many people still believe that bullion remains a safe haven in times of financial or political uncertainty.
— The Jakarta Post

For Indonesian enterprises, green is the new black
Enterprises from micro to multinationals in Indonesia are increasingly pushing a green and sustainability agenda into their businesses as more awareness has been raised among consumer and industry players.
— The Jakarta Post

Small steps taken toward lower carbon development
Oil palm plantations have provided food on the table for many families in the villages of Sungai Kayu Ara and Parit I/II, Siak regency, Riau. Dozens of women there, however, have been fighting against all odds to lower their reliance on the controversial commodity for the past year.
— The Jakarta Post

Four dead, one missing: ship sinks after being struck by lightning off of N. Sumatra
Four sailors have been found dead and one is missing after a ship sank off of Pini Island, South Nias regency, North Sumatra, last week.
— The Jakarta Post

Consumer shift behind spending slowdown: Analysts
As consumer spending growth cools, retail sales slump and car sales slow, many have questioned if domestic consumption is in a decline but economists and businesspeople have expressed confidence that the trend is just a reflection of a shift in customer behavior.
— The Jakarta Post

East Java man allegedly kills friend after catching him about to rape his wife, turns himself in
A 25-year-old man, identified by his initial N, from the East Java regency of Probolinggo turned himself in to the local police after he allegedly killed his friend, who allegedly raped his wife twice in the past month.
— Coconuts (paywall)

Three students named suspects following fatal brawl on North Sumatra campus
The Medan police have arrested three students they accuse of involvement in the killing of a 21-year-old man during a brawl that broke out between students of Huria Kristen Batak Protestan (HKBP) Nommensen University in Medan, North Sumatra on Friday.
— The Jakarta Post