Indonesia morning news for May 22 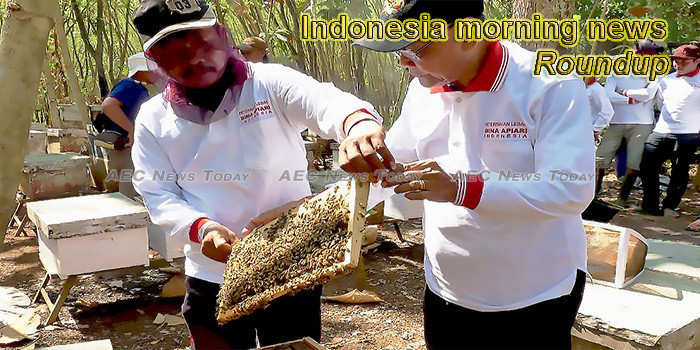 With Joko Widodo’s Re-election, Indonesia Bucks Global Tilt Toward Strongmen
The woman threw herself on the road in front of the motorcade, forcing the vehicle with the license plate “Indonesia 1” to slam on the brakes.
— The New York Times

Boeing Max may be grounded beyond this year, Indonesia says
Indonesia signaled it may ground Boeing Co.’s 737 Max until next year, underscoring the challenges faced by the US planemaker as it races to get its fastest-selling jet back in the air after two fatal crashes.
— The Jakarta Post

Prabowo Rejects Election Result, but Backtracks on ‘People Power’ Threat
Presidential candidate Prabowo Subianto said on Tuesday that he rejects the official presidential election result and will go to the Constitutional Court to settle the dispute.
— Jakarta Globe

Prabowo Reported as Suspect for Alleged Treason
Presidential candidate Prabowo Subianto was reported in the alleged treason case of Eggi Sudjana as noted in the investigation order letter (SPDP) issued by Jakarta Metro Police to the head of Jakarta High Prosecutor’s Office.
— Tempo.co

How a dispute over Indonesia’s election is likely to unfold
Indonesian President Joko “Jokowi” Widodo comfortably won last month’s presidential poll, an official count showed, but the refusal of his opponent Prabowo Subianto to concede defeat has triggered the prospect of both a legal challenge and street protests.
— The Jakarta Post

Indonesian escapes drug smuggling conviction in the Philippines
An Indonesian convicted in the Philippines in 2012 for drug trafficking has returned home after years of ensuing court hearings, the Foreign Ministry announced on Monday, after an appeals court recently overturned her life sentence.
— The Jakarta Post

Indonesia calls on palm oil industry, obscured by secrecy, to remain opaque
Environmental activists in Indonesia have denounced a recent call by the government to keep data about oil palm plantations out of the public’s reach.
— Mongabay

Green Iftar, ‘#RamadanHijau’ campaign to reduce iftar waste
Jakartans are no stranger to the mountain of trash produced during Ramadan at the end of every bukber (short for buka bersama; breaking-of-the-fast together).
— The Jakarta Post

Indonesia projects 9% growth for food and beverage manufacturing industry in 2019 with US$4.4bn investments
The Indonesian Ministry of Industry (Keminperin) has predicted a growth of at least 9% for the country’s food and beverage industry this year, attributed to additional investment in the sector.
— FoodNavigator-Asia

Is Indonesia a slumbering giant?
Market research firm Canalys has named Indonesia as the fastest growing market for smartphones in Southeast Asia.
— The Asean Post

Explainer: How a dispute over Indonesia’s election is likely to unfold
Indonesian President Joko Widodo comfortably won last month’s presidential poll, an official count showed, but the refusal of his opponent Prabowo Subianto to concede defeat has triggered the prospect of both a legal challenge and street protests.
— Reuters

Plaza Indonesia Closes Doors in Anticipation of May 22 Rally
The managers of Plaza Indonesia in Central Jakarta plan to close a number of its entrances and exits in anticipation of the protest rally in front of the Election Supervisory Agency (Bawaslu) office, today and tomorrow, May 22.
— Tempo.co

Stock Market Extends Rebound After Prabowo Opts for Court Settlement Over Street Protest
Indonesia’s benchmark stock index continued its rebound on Tuesday from a six-month low after presidential candidate Prabowo Subianto watered down threats of mass action against the result of last month’s presidential election and vowed to take the dispute to the Constitutional Court instead.
— Jakarta Globe

May 22 Rally; Police Give Protesters Until Tarawih Ends
The police gave the May 22 protesters until the end of Tarawih prayers to stage their rally in front of the General Election Commission (KPU) building and the Election Supervisory Body (Bawaslu).
— Tempo.co

Muhammadiyah urges people to not partake in May 22 rally
Central Executive Board Chairman of Muhammadiyah, Indonesia’s second-largest Islamic organization, Haedar Nashir, has appealed to the people to not take part in the rally on May 22 in Jakarta.
— Antara News

Indonesia Is Turning Chinese
Indonesia was never keen to be part of China’s Belt and Road Initiative. That hasn’t stopped it from embracing the Chinese way when it comes to financing roads and railways.
— Bloomberg

Prabowo urges supporters to hold rallies peacefully
Presidential candidate Prabowo Subianto has appealed to his supporters to not resort to violence while holding rallies related to the results of the 2019 Presidential Election.
— Antara News

Mosque Organizer Under NU Forbids Rally Goers to Stay Overnight
The Mosque Management Organization of the Jakarta Chapter of Nahdlatul Ulama, known as LTM PWNU Jakarta, called on all mosques in the capital city deny accommodations to participants of the May 22 rally.
— Jakarta Globe

Minor clashes reported as police move to disperse protesters in Jakarta
Minor clashes were reported on Tuesday (May 21) evening as police tried to disperse some 2,000 protesters who had gathered at the headquarters of the election supervisory agency (Bawaslu), an independent agency tasked to oversee elections and rule on disputes.
— The Straits Times (annoying popups)

Police Thankful of the Initial May 22 Peaceful Protest
Head of the Metro Jaya Police public relations officer Senior Commissioner Argo Yuwono said that the May 22 rally dubbed ‘Gerakan Nasional Kedaulatan Rakyat’ at the Elections Supervisory Board (Bawaslu) had gone smoothly in a peaceful manner.
— Tempo.co

Enjoying the sights and sounds while returning to homeland
Mudik, or homecoming, the annual special tradition of going home is followed before Eid Al-Fitr, locally known as Lebaran, something that other countries may not experience.
— Antara News

Four named as suspects in purchasing KKP Customs patrol boats
The Corruption Eradication Commission (KPK) has named four suspects in corruption cases connected to their purchasing patrol boats at the Directorate General of Customs and the Ministry of Maritime Affairs and Fisheries.
— Antara News

PDI-P, Gerindra top election results, but Golkar has something to celebrate too
The Indonesian Democratic Party of Struggle (PDI-P) and the Gerindra Party have come out on top in the legislative election, according to the nationwide tally of the General Elections Commission (KPU), but Golkar Party executives were celebrating on Tuesday, saying they had secured the second-most seats at the House of Representatives.
— The Jakarta Post

Fire destroys part of city auditorium in Pasar Minggu
A fire has damaged a city-owned auditorium in Ragunan, South Jakarta. No casualties were reported in the incident on Tuesday.
— The Jakarta Post

Riau Governor to Sanction State Apparatus Who Join May 22 Rally
Riau Governor Syamsuar asserted that he will impose a sanction to state apparatus or ASN who join the rally against the election result on May 22.
— Tempo.co

Non-recipients of THR should report to THR Command Post: Dhakiri
Manpower Minister M. Hanif Dhakiri urged workers, who had not received Holiday Allowance (THR) from their companies, to report to the THR Payment Consultation and Law Enforcement Service Post in 2019.
— Antara News

Outreach: Liquid Gold from the Barren Land
Haerudin now able to send his children to college. The finances of this 48-year-old farmer have improved thanks to honey bee farming, which is a part of the Kampung Lebah (bee village) program initiated by the Technology Experts for Public Bee Activity Intermediation Group (abbreviated Kiat Apis) of Mataram University’s Animal Husbandry Faculty and the North Lombok regency government.
— Tempo.co

Bali, Indonesia Surf Forecast 22 – 31 May, 2019
In the wake of a great day of competition at the Corona Bali Protected on Monday we’re now seeing wave-energy subsiding to a lower 2ft to occasional 3ft-ebb across Indonesia’s exposed coasts.
— Coastal Watch

Garuda signs deal with pawnshop to market products
lag carrier PT Garuda Indonesia and state-owned pawnshop PT Pegadaian have signed an agreement to help each other market their products.
— The Jakarta Post