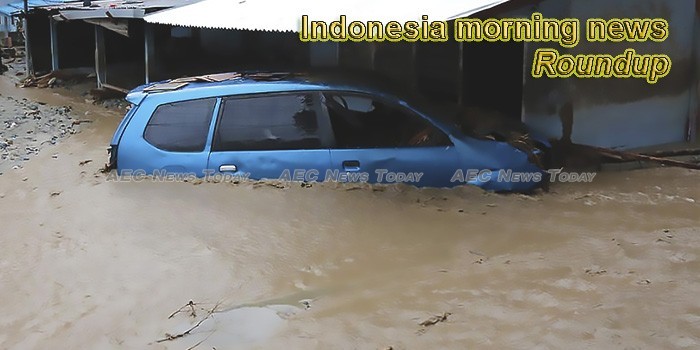 Indonesia slams EU for using old data as basis for regulation
The government has further criticized the European Union’s plan to restrict palm oil-based biofuels after the bloc said the constraint was based on data from 2015.
— The Jakarta Post (paywall)

Indonesian politics “too dirty and too boring”
While campaigning for the Indonesian presidential election is slated to begin soon, a report has revealed that millennials in Indonesia are disenchanted with the country’s political establishment.
— The Asean Post

Toward Indonesia’s energy transition
In her recent visit to Indonesia, the former secretary-general of the United Nations climate change negotiations, Christiana Figueres, a global key player in climate change, coined a new term that could describe the best prescription for energy transition in the country: “Gragent” — meaning gradual but urgent.
— The Jakarta Post (paywall)

Indonesia palm oil growers threaten retaliation over EU ‘intimidation’
Biofuel producers in Indonesia called on the Indonesian government and EU to find a “win-win solution” to a dispute over legislation that will phase out palm oil manufacturing in the region, risking jobs and billions of dollars in revenue.
— Arab News

New MRT to battle Jakarta’s traffic congestion
Jakarta commuter Irnawati can spend up to four hours daily in her car, but now she and millions of others may get some relief as the traffic-clogged Southeast Asian city opens its first mass rapid-transit (MRT) system.
— The Asean Post

Salim should not use possible seizure of Tuaspring to justify terminating its deal with Hyflux: PUB
Indonesian conglomerate Salim Group should not use the possible seizure of the Tuaspring plant to justify terminating its bailout agreement with local water treatment firm Hyflux, said the Public Utilities Board (PUB) on Fri (21 Mar).
— The Online Citizen

40 stunning free photos of Indonesia
Using beautiful pictures is critical for marketing collateral to present a professional and appealing message to potential customers.
— Asean Up

Gov’t encourages water conservation in World Water Day Commemoration
Director of Forestry and Water Resources of the National Planning Agency Nur Hygiawati Rahayu encouraged the establishment of partnerships and increased cooperation and expanded capacity for water and environmental conservation and sustainable development to protect the environment and the sustainability of water resources.
— Antara News

PMI Speeds Up Disaster Mitigation Efforts in Flood-hit Sentani
The Indonesian Red Cross (PMI) held a coordinating meeting to discuss efforts to expedite handling of the impacts of flooding that hit Sentani and several other sub-districts in Jayapura District, Papua, on March 16, 2019.
— Tempo.co

Indonesia busts Russian smuggling drugged orangutan
Andrei Zhestkov was detained in Denpasar airport late on Friday while passing through a security screening before a planned flight back to Russia.
— Review Online

PMI speeds up disaster mitigation efforts in flood-hit Sentani
The Indonesian Red Cross (PMI) held a coordinating meeting to discuss efforts to expedite handling of the impacts of flooding that hit Sentani and several other sub-districts in Jayapura District, Papua, on March 16, 2019.
— Antara News

EU bases planned palm oil restriction on 2015 data
In response to Jakarta’s objection to a European Union bill that would cap the use of palm-oil-based biofuels in the region, the bloc explained that the regulation was not meant to target specific biofuels or feedstocks, but was based on deforestation data from 2008 to 2015 that showed large a proportion of the deforestation was associated with palm oil.
— The Jakarta Post

Bawaslu and elections’ participants declare peaceful elections
The Election Supervisory Body (Bawaslu) held a declaration of joint commitment ahead of the convening of open campaigns to ensure that the parliamentary and presidential elections will run fairly, honestly, democratically, and with dignity.
— Antara News

Java-Bali electricity to get additional 3,000 MW supply
State-owned electricity company PLN will operate three steam-fueled power plants (PLTU) late this year and early next year that will produce 1,000 megawatts (MW) each and will be used as an additional supply for the Java-Bali electricity system (PJB), according to PJB operational director Sugiyanto.
— The Jakarta Post

MRT Jakarta Fixes Facility for Disabled following Jokowi’s Critic
MRT Jakarta will attach ram to narrow the gap between the train and the platform in every station to ease wheelchair users entering the MRT train, Ratanga. This is done after President Joko “Jokowi” Widodo addressed his critic about the MRT facility for wheelchair users.
— Tempo.co

Leaders must be at forefront in facing obstacles: Jokowi
Presidential candidate number 01 Joko Widodo (Jokowi) emphasized that a leader must be a vanguard in the face of obstacles and not spread pessimism.
— Antara News

Indonesia signs economic agreement with Fiji and PNG
Indonesia signed a joint statement on the launch of a preferential trade agreement (PTA) respectively with Papua New Guinea and Fiji during the South Pacific Forum (ISPF) held in Jakarta on Thursday.
— One Png

3 Modern Tourists Attractions in Jakarta
Jakarta is famous for its Monas (National Monument) and Ancol as tourists attractions. But actually, there are a lot of other spots in the capital where you can spend your weekend vacation with the family.
— Tempo.co

Deaf and mute Indonesian boy who aided Malaysians in Lombok quake hailed as a hero
Indonesia (The Jakarta Post/Asia News Network): Global Peace Mission (GPM) Malaysia has said that it plans to name a disabled seven-year-old boy from Lombok Island, West Nusa Tenggara, a hero for helping foreign tourists evacuate from the area when an earthquake jolted the island recently.
— The Star Online

Indonesia’s pivot as a regional maritime power
The Indonesian presidential election next month will be a marker in Asia’s larger quest for strategic coherence.
— Straits Times

Depok to launch double-decker bus for tourists
The Depok transportation agency will soon launch a bus called Oren or cool odong-odong (amusement ride) to boost tourism in the city.
— The Jakarta Post

Indonesia detains Russian suspected of drugging, smuggling orangutan
A Russian tourist attempting to smuggle a drugged orangutan out of Indonesia in his suitcase to bring home and keep as a pet has been arrested in Bali, police said on Saturday (Mar 23).
— Channel NewsAsia (annoying popups)

Jakartans proud of the city’s first MRT
A number of Jakarta residents have expressed their pride on the presence of the country’s first Mass Rapid Transit (MRT).
— Antara News