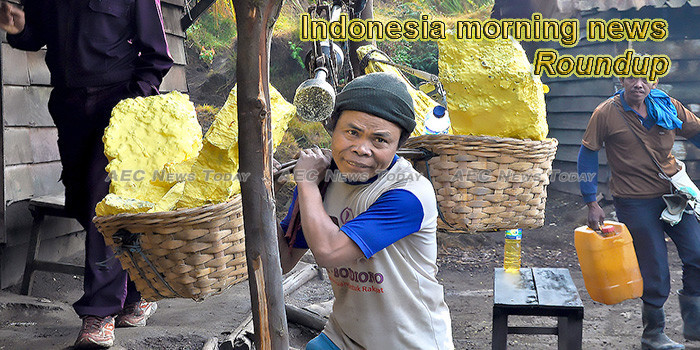 Thunberg proved ‘we are not alone’, say young Indonesian tree planters
Thousands of young Indonesians have spearheaded a three-day mass tree-planting drive across the sprawling archipelago in an effort to fight climate change and stop deforestation.
— Intellasia

Govt urged to ratify convention against violence, harassment in workplace
Indonesian labor unions have applauded the International Labor Organization’s (ILO) new convention that aims to combat violence and harassment in the workplace, and urged the government to immediately ratify the treaty to provide better protection for workers in the country.
— The Jakarta Post

Indonesian immigration developing QR code tech to monitor movement of foreigners
QR (quick response) codes have become ubiquitous in Indonesia in recent years, particularly in the use of e-payment systems, but the tech may soon be used for Black Mirror-esque surveillance of foreigners if the Immigration Office gets its wish.
— Coconuts

RI workers can stay up to five years in Japan
Intellasia East Asia News Thousands of aspiring Indonesian workers can soon get their golden ticket to work in Japan following the signing of a bilateral programme agreement involving the two Asian countries.
— Intellasia

Amnesty International accuses Indonesian police of torturing suspects apprehended during May 21-23 riots
In an open letter to President Joko released by the international human rights activist NGO, Amnesty expressed its concerns about “grave human rights violations” allegedly committed by the police during and around the time of the post-election result riots.
— Coconuts

Respecting MK’s ruling for a united Indonesia
Ma’ruf Amin pair as winners of the presidential elections held on May 21, 2019.
— Antara News

Indonesia eyes remote islands to relocate its overcrowded jails
Indonesian prisons are overflowing with convicts and authorities worried about their negative influence on city dwellers are exploring shifting them to some of the uninhabited islands in the archipelago.
— Intellasia

Thursday’s rally will run peacefully: Jakarta governor
The Jakarta provincial government expressed its optimism that the rallies that people would stage in connection with the Constitutional Court’s (MK’s) ruling on the presidential election result dispute on Thursday would run peacefully.
— Antara News

Construction of Ainun Hospital in line with procedures: govt
The Head of Gorontalo Province’s Planning, Research and Development Agency (Bapppeda), Budiyanto Sidiki, said on Wednesday that the construction of the Ainun Habibie Hospital with the scheme of the Government and Business Entity Cooperation (PPP) was carried out in accordance with procedures.
— Antara News

Private tuition offers ‘shortcut’ to top colleges —and four-star hotel stay
Taking bimbel (private tuition) was normal for Triana Deninta Nurfadhillah or Tia, a senior high school student in Sidoarjo, East Java, who will be enrolling at her dream campus of Gadjah Mada University in Yogyakarta in August.
— The Jakarta Post

Indonesian public school’s circular saying students are required to wear Islamic dress causes controversy
One of the many areas that Indonesia’s rising religious conservatism is causing conflict is in the country’s schools, where clashes over student uniforms and requirements they include religious elements have generated controversy.
— Coconuts

Three teachers in Banten face 20 years for alleged sexual abuses against students
Three teachers of a state junior high school in Serang regency, Banten were recently arrested for allegedly sexually abusing three of their students, one of them is now 21 weeks pregnant.
— The Jakarta Post (paywall)

Lighter factory owner locked front door to avoid tax officers: Police
The North Sumatra Police have said that the owner of a lighter factory in Sambirejo village, Langkat regency, that burned down last week had locked the premises’ doors to avoid tax officers and other agencies, resulting in 25 adults and five children dying as they could not escape the fire.
— The Jakarta Post

‘I thought it was a monkey’: Russian defendant regrets attempt to smuggle orangutan
A prosecutor demanded on Tuesday that the Denpasar District Court sentence a Russian man, Andrei Zhestkov, 27, to six months in prison for trying to smuggle an orangutan from Bali.
— The Jakarta Post

Boy drowns in abandoned mining pit in East Kalimantan
The body of a 10-year-old boy named Ahmad Setiawan was found on Saturday afternoon in a water-filled pit in Pinang village in Samarinda, East Kalimantan.
— The Jakarta Post