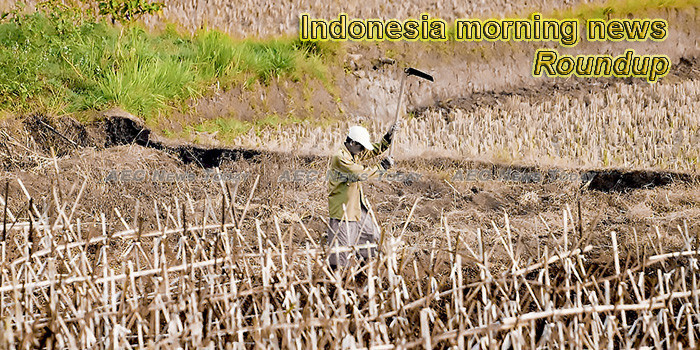 Indonesia’s tourist haven Bali aims to blaze global trail on stemming ocean plastic
Less than half of the garbage produced on Indonesia’s resort island of Bali is recycled, with thousands of tonnes burned or dumped in rivers and the ocean, researchers warned on Thursday (June 20).
— The Straits Times (annoying popups)

Indonesia to require budget airlines to cut prices from next week-minister
Indonesian Transport Minister Budi Karya Sumadi said on Thursday that low-cost airlines will be required to cut prices on certain domestic routes and “during certain hours” starting next week.
— Reuters

Comfortably Reelected, Indonesia’s Jokowi Opens the Door to China’s Belt and Road
The ballots hadn’t even been counted yet when the deals were announced. On April 26, just two days after Election Day, Indonesia signed 23 memorandums of understanding with China, worth $14.2 billion in all, for several major infrastructure projects.
— WPR

Refugees, Asylum Seekers Sleep Rough on the Streets of Jakarta
A tiny alley just around the corner from the United Nations’ refugee agency, the UNHCR, on Jalan Kebon Sirih in Central Jakarta, has become a home in transit for a group of 15 asylum seekers and refugees from Afghanistan, South Sudan and Somalia.
— Jakarta Globe

Lombok Scraps Plan on Hikers Separation in Mount Rinjani
An issue about the separation of hiking and camping areas for male and female hikers in Mount Rinjani, Lombok, West Nusa Tenggara (NTB) has gained much public attention, especially on social media. The plan emerged since Lombok administration determined to support halal tourism.
— Tempo.co

Jokowi expected to discuss protection of migrants at ASEAN Summit
The labor rights advocacy group Migrant CARE expects President Joko Widodo (Jokowi) to talk to ASEAN leaders about the protection of migrant workers, an issue that has been on his national agenda and which many are hoping will be championed in ASEAN.
— Antara News

Sago key for diversifying diets in Indonesia
ark and swampy. That was my impression of the first sago palm grove that I ever saw during a visit to Southeast Sulawesi.
— The Jakarta Post

APEC’s goods trade tapers yet services trade picks up
Trade — earlier the main driver of growth for the Pacific Rim region — is slackening, and its moderation is having an impact on the economy, according to the latest APEC Regional Trends Analysis (ARTA).
— Antara News

Sarmi District rattled by 6.3-magnitude quake
The Meteorology, Climatology, and Geophysics Agency (BMKG) reported that Sarmi District in the easternmost Indonesian province of Papua experienced a powerful 6.3-magnitude earthquake on early Thursday though it did not cause a tsunami.
— Antara News

Political polarization threatens national unity: activist
Polarization due to political, religious, and ethnic fanaticism has the potential to threaten the nation’s unity if it is not immediately stopped, Chairman of the Anti-Defamation Society of Indonesia (Mafindo) Presidium Septiaji Eko Nugroho said.
— Antara News

MRT Jakarta decides on Ancol as site of depot in Phase II construction
North Jakarta’s Ancol area has been selected as the site of a depot that is to be constructed during the second phase of the MRT Jakarta development project.
— The Jakarta Post

Expert: Announcement of Radicalism in the Military is a Blunder
Expert on terrorism and intelligence Harits Abu Ulya questioned the motive behind Defense Minister Ryamizard Ryacudu’s statement where he announced 3 percent Military members have been exposed to radicalism.
— Tempo.co

Annual Jakarta Fair Festival Attracts Millions of Visitors
The annual event that coincides with the city’s anniversary, Jakarta Fair Kemayoran (PRJ) predictably attracted more than four million visitors since its opening on May 22 up to June 19.
— Tempo.co

Konawe Flood: PUPR Ministry Steps Up 3 Dams Construction Project
Public Works and Housing (PUPR) Minister Basuki Hadimuljono said that his ministry would step up the construction project of three dams in Southeast Sulawesi. He said that the plan was intended to minimize floods in the Regency.
— Tempo.co

Trade disputes to dominate as ASEAN meets in Bangkok
Southeast Asian leaders will dissect the impact of the US-China tariff war this weekend at a Bangkok summit, with Beijing determined to drive forward a trade pact sweeping in 40 percent of global commerce — but excluding America.
— The Jakarta Post

Lao Morning News For May 15