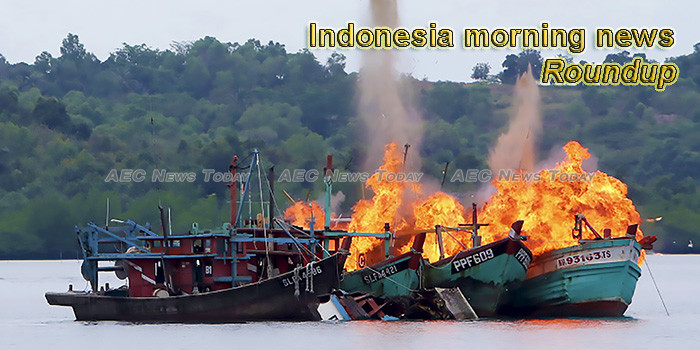 Drug money allegedly ending up in hands of officials, wardens: BNN
The National Narcotics Agency (BNN) is investigating the possibility that money from drug trafficking has ended up in the hands of regional officials and jail wardens.
— The Jakarta Post

Indonesia in fight with EU over biofuel, again
Indonesia is facing a fresh round of accusations over its management of its palm oil industry from one of its biggest importers, the European Union, adding to the prolonged feud between the two trading partners over the commodity.
— The Jakarta Post

Drought threats may affect food prices: researcher
The government would need to seriously address the threat posed by drought as it could lead to the risk of crop failures and furthermore affect food prices, a researcher at he Center for Indonesian Policy Studies (CIPS) Galuh Octania said.
— Antara News

Sinking Jakarta needs giant sea wall: Indonesia president
Indonesia’s president said in an interview that he wants to see the speedy construction of a giant sea wall around Jakarta to prevent the low-lying capital from sinking under the sea, lending renewed backing and a sense of urgency to a slow-moving and politically contested mega project.
— Bangkok Post

Health Ministry downgrades status of 615 hospitals to control claims
After a thorough review, the Health Ministry has lowered the accreditation level of 615 hospitals across the country, which is expected to cut down on the soaring number of hospital claims that have caused a perpetual deficit to the National Health Insurance (JKN) program.
— The Jakarta Post

Police track foreign funding of IS-linked JAD
The National Police are tracking a source of funding for Islamic State-linked homegrown militant group Jamaah Ansharut Daulah (JAD), after authorities uncovered a flows of funds from people in five different countries to an alleged mastermind behind the group’s terror attacks.
— The Jakarta Post

IPB researchers create protein-dense biscuits as survival food
Researchers from the Bogor Institute of Agriculture’s (IPB) nutrition department have developed protein-dense catfish biscuits that can be rationed and consumed during emergency situations, particularly after a natural disaster.
— The Jakarta Post

Watch: Indonesian police officer carried on hood of car as driver tries to evade ticket
Here’s one of Indonesia’s finest, literally putting his body on the line in service of the force.
— Coconuts

Unilever’s profit slightly up in first half as sales stagnate
Consumer goods giant PT Unilever Indonesia has booked a slight increase in profit during the first half of this year as the firm’s sales stagnated.
— The Jakarta Post

BTN books lower profit in H1, but optimistic 2019 target can be achieved
State-owned lender Bank Tabungan Negara (BTN) recorded a net profit of Rp 1.3 trillion (US$93.03 million) in the first half, down around 8 percent from Rp 1.42 trillion in the same period last year.
— The Jakarta Post

Improving human resources to respond to global challenges
President Joko Widodo (Jokowi), who has been reelected for the 2019-2024 period, is set to focus on the development of human resources, after intensifying infrastructure constructions in his first term.
— Antara News

How roles of political parties evolve over time in Indonesia
Legal proof: An official examines boxes containing evidence that would be used in the trial of the 2019 general election result dispute at the Constitutional Court.
— The Jakarta Post

3 killed, 1 missing as mine collapses in Indonesia
At least three people have been killed and one person is still missing after a tin mine collapsed in Indonesia’s Bangka Belitung province, with the body of one more miner retrieved on Sunday (July 28), a disaster agency official said.
— Straits Times

Jokowi believed to recruit young people in cabinet: political analyst
The presence of President-elect Joko Widodo’s inner circle could be a clue to his readiness to keep his promise of recruiting members of Indonesia’s younger generation to be part of members of his upcoming cabinet line-up, a political analyst said.
— Antara News

Bogor mulls tram line for public transportation, tourism
The Bogor municipal administration in West Java has partnered with France-based civil engineering firm Colas Group to look into the possibility of building a tram line following the beginning of construction on the Greater Jakarta LRT that will connect the capital to the Baranangsiang bus terminal in the city.
— The Jakarta Post

Muslims in Indonesia prepare to celebrate Eid al-Adha
A costumer (L) checks a cow for the upcoming Eid al-Adha festival at a cow barn in Depok, West Java, Indonesia, on July 27, 2019.
— Xinhua

Govt seeks ‘healthy’ inflation rate
Inflation in an economy is similar to blood pressure in the human body, Vice President Jusuf Kalla said in his speech as he tried to explain the importance of the data in front of hundreds of administration officials from across the archipelago who gathered in Jakarta on Thursday.
— The Jakarta Post

Mt Tangkuban Perahu’s eruption not trigger faults’ motions: Researcher
This week’s eruption of Mount Tangkuban Perahu would not trigger the motions of Cimandiri and Lembang Faults, a researcher of the Energy and Mineral Resources Ministry’s Center for Volcanology and Geological Disaster Mitigation (PVMBG) opined here on Sunday.
— Antara News

Body of missing Jordanian found adrift in Bali’s waters
A foreign national from Jordan, identified by the initials as MMM, 28, who had gone missing while swimming at Double Six Beach, Seminyak, Kuta, Bali, was found dead.
— Antara News

Garuda books loss in restated 2018 financial report
National flag carrier PT Garuda Indonesia’s balance sheet nosedived into negative territory after it refiled its 2018 financial report, which was previously disputed by two of the firm’s commissioners, with the authorities slapping it with a string of sanctions.
— The Jakarta Post

Istiqlal Mosque remains popular amid ongoing renovations
Grand and iconic, Istiqlal Mosque in Central Jakarta is to reveal its new facilities and revamped façade next year as renovations are now underway, even as worshippers still frequent the mosque with the disturbances caused by the construction work all around them.
— The Jakarta Post

Dry season turns Ciliwung River black and smelly
Residents of Jatipulo subdistrict in Palmerah, West Jakarta have complained about the putrid smell and the blackish color of the Ciliwung River in the area.
— The Jakarta Post

Indonesia’s Aldila wins women’s doubles title in Thailand
7(7) 4-6 against Peangtarn Plipuech of Thailand and Akiko Omae of Japan in the finals.
— Antara News

Indonesia beats Vietnam in AFF U-15 2019 Championship
Indonesia beat Vietnam 2-0 in the first leg of Group A of the 2019 ASEAN Football Federation (AFF) Under-15 national Championship in Thailand Saturday evening.
— Antara News

Deaf youth demand better employment opportunities
Millennials find it hard to land a job in the capital.
— The Jakarta Post

Orange troops, keeping city clean while people keep littering
Dealing with the persistent habit of littering is something they face every day.
— The Jakarta Post

Tangerang, South Tangerang hold job fairs to lower unemployment
Even though rapid development of Jakarta’s satellite cities in recent years has resulted in economic growth that has spurred jobs and demand for skilled workers, unemployment remains an issue.
— The Jakarta Post

‘Ojol’ drivers self-organize to help each other on streets
For many app-based ojek (motorcycle taxi) drivers, the phrase “strength in numbers” may echo deep in their daily lives.
— The Jakarta Post

Rain catcher village in North Jakarta feels pinch of dry spell
For as long as the residents of the fishing village in Kamal Muara, North Jakarta remember, they have always relied on rainwater for their daily needs.
— The Jakarta Post