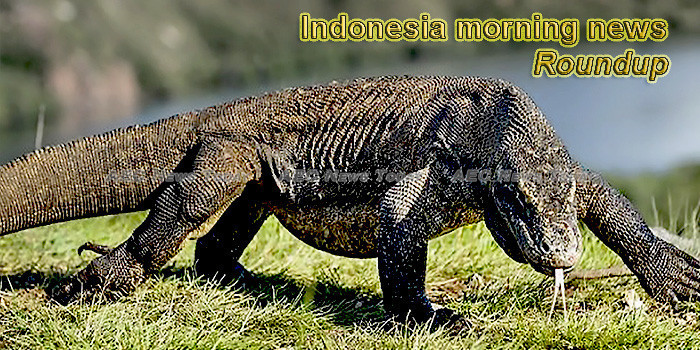 Indonesia to assess whether ISIS fighters’ kin can return
Indonesia may be made to choose between being humane and protecting its security as it considers whether to take back more than 100 of its citizens believed to be family members of Indonesians who joined the militant group Islamic State in Iraq and Syria (ISIS).
— Straits Times

Indonesia takes firm stand on saying no to foreign rubbish
Over the past few months, Indonesia has repeatedly shown its objection toward becoming a dumping ground for foreign trash containing hazardous and toxic waste (B3 waste).
— Antara News

Indonesia’s Export Dilemma among OIC Countries
Indonesia managed to become the nation with the largest export among the Organization of Islamic Cooperation (OIC) countries after the country’s export in 2018 reached US$762 billion, according to Halal Lifestyle Center Chairman Sapta Nirwandar.
— Tempo.co

Indonesia, China discuss transfer of energy technology at 6th ICEF
The governments of Indonesia and China held discussions on matters ranging from the transfer of technology to energy development at the 6th Indonesia-China Energy (ICEF) Forum in Beijing on July 8-10, 2019.
— Antara News

Child Protection Ministry Responds to Plan of Ex ISIS Return
Deputy of Child Protection of the Women Empowerment and Child Protection (PPPA) Ministry, Nahar, said that his side will coordinate with related parties that examine former Indonesian supporters of Islamic State (ISIS) in Syria.
— Tempo.co

Ride bus or train, capture and post: City challenges civil servants
The Jakarta administration recently launched the ‘#7dayschallenge’, which aims to urge civil servants to switch from private vehicles to public transportation for their daily commute.
— The Jakarta Post

Private university graduates start to gain ground in employment hunt
While alumni of state-run universities remain preferred by employers in general, the fact that startups prefer to hire graduates from private universities is a testimony to the latter’s capability to respond to new demand in the job market.
— The Jakarta Post

Juul Labs Forays Into Indonesia, the World’s Second-Largest Market for Smokers
Juul Labs Inc. began selling its electronic cigarette products in Indonesia in partnership with a distributor known for selling Apple Inc.’s iPhones as it widens its presence in Asia.
— Bloomberg

Enough of the ‘begpacker’: Jail time, fines await violators in Bali
A form of international backpacking called begpacking has become a rising trend among certain travelers, many of whom frequent popular tourist destinations in Asia, including Bali.
— The Jakarta Post

FPI yet to meet all requirements for permit extension: Minister
Although its mass organization permit expired on June 20, the Islam Defenders Front (FPI) has still not fulfilled the administrative requirements for an extension, the Home Minister has said.
— The Jakarta Post

Pluit residents reject plan to build school on their park
A plot of land in Pluit Putri housing complex in Pluit, North Jakarta, is currently the object of a dispute between residents and city-owned developer PT Jakarta Propertindo (Jakpro).
— The Jakarta Post

Anies appoints new officials to posts left vacant for months
Jakarta Governor Anies Baswedan had long been under the spotlight for holding off on appointing permanent members to his working team, opting instead to allow acting heads to take on various responsibilities at strategic agencies for months.
— The Jakarta Post

Supreme Court Frees Former Bank Restructuring Agency Chief in Long-Running Bailout Graft Case
The Supreme Court on Tuesday accepted an appeal from Syafruddin Arsyad Temenggung, the former chairman of Indonesia’s Bank Restructuring Agency, or BPPN, against a verdict from the anti-graft court and the Jakarta High court to jail him for his involvement in the long-running BLBI bailout fund graft case.
— Jakarta Globe

Islamic State-linked group behind murder of father, son: Sulawesi police
Central Sulawesi Police said that the East Indonesia Mujahidin (MIT), a terrorist group that has pledged allegiance to the Islamic State (IS) movement, was allegedly behind the murder of a father and his son in Batu Tiga, Parigi Moutong regency, Central Sulawesi.
— The Jakarta Post

PKB leader expresses keenness to be MPR speaker
National Awakening Party (PKB) leader Muhaimin Iskandar was unequivocal in expressing keenness to be selected as the People’s Consultative Assembly (MPR) speaker rather than being appointed as cabinet member in the Joko Widodo-Ma’ruf Amin administration.
— Antara News

Nearly 13,000 police personnel deployed for Persija v Persib soccer match in GBK stadium
Soccer is undoubtedly the most popular sport in Indonesia, but the beautiful game can get extremely ugly when it comes to local rivalries, particularly that of Jakarta’s Persija and Bandung’s Persib.
— Coconuts

Construction accident at Bogor highway project causes traffic congestion
Liquid concrete was leaked from a pillar cast at the construction site of the Bogor Ring Road (BORR) highway project on Jl. Sholeh Iskandar in Bogor, West Java, and spilled over onto the road, causing traffic congestion in the area and injuring two workers.
— The Jakarta Post

Dentist in Sumatra finds dream crushed because of disability
A number of activists in Padang, West Sumatra, protested on Tuesday the removal of a dentist from the civil servant candidate list because she has a disability.
— The Jakarta Post

Man held captive for failing to show up for job
A man named Faridi, 56, was held captive with his feet and arms tied inside a mie ayam (chicken noodle) stall at the Muara Angke Fish Wholesale Market in Penjaringan, North Jakarta, last week from Thursday to Friday.
— The Jakarta Post

Orangutan regains health despite presence of 64 pellets in body
A 30-year-old female orangutan that was shot multiple times by a group of hunters during land clearing in Aceh has begun to regain her health.
— The Jakarta Post