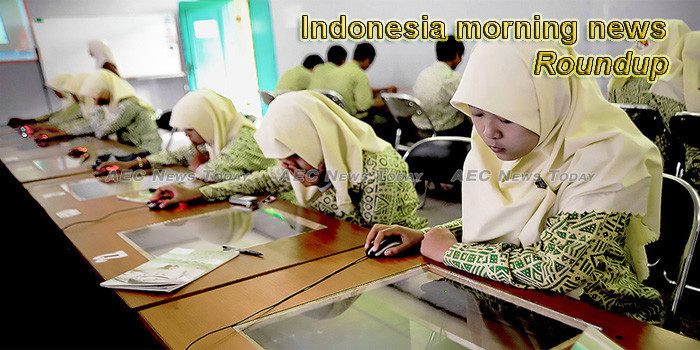 Indonesia’s trade doomed without adaptations
Stakeholders are worried the United States-China trade war will continue to take its toll on Indonesia after inflicting a huge blow to the country’s trade balance in 2018.
— The Jakarta Post

Indonesians upbeat as currency pressures ease
Optimism among Indonesian consumers was bolstered in the fourth quarter by easing pressure on the rupiah. Combined with notable improvements in sentiment among Filipinos and Vietnamese, this helped our regional gauge of economic sentiment rise 1.8 points to 66.1, its strongest reading in more than four years.
— Financial Times

Indonesian government drafts industrial change road map to reduce plastic waste | #AsiaNewsNetwork
The government has been working on ways to engage the private sector in its waste reduction efforts, particularly plastic waste, by formulating a road map for businesses to reduce the amount of waste it produces.
— Eleven

Indonesia mutual fund assets growth decelerates sharply in 2018
Indonesia’s mutual fund industry assets grew at a sharply slower pace in 2018 as concerns about the trade war between the US and China and US interest rate hikes took a toll, according to latest figures from the country’s financial services regulator.
— Asia Asset Management

Indonesia Ranks as World’s Fourth-Most ‘Instagrammable’ Country
We know Indonesia is one of the world’s top tourist destinations, but we can now also boast being one of the most attractive on Instagram.
— Jakarta Globe

Less than one week left – Join us at Indonesia’s best government summit
We are six days away from GovPay | GovNext, Indonesia’s biggest and best government technology, digital identity, cyber security, finance, payments, procurement, licensing, data analytics, and public safety summit. Will you be there?
— GovInsider

Indonesia bookstores going online to join global trend | #AsiaNewsNetwork
Online platforms continue to develop as places to purchase various types of products, including books, triggering the presence of new online bookstores and prompting established ones to join the bandwagon.
— Eleven

Authorities Blame Local Thugs for Chaos During Forced Relocation of Street Vendors in Tanah Abang
Governor Anies Baswedan said his administration would forge ahead with a plan to relocate street vendors from Tanah Abang in Central Jakarta, despite violent resistance to the move late last week.
— Jakarta Globe

Guidelines about do’s and don’ts of visiting Indonesia temples | #AsiaNewsNetwork
Indonesia is home to thousands of temples. Their centuries-old history and beauty make them one of the most popular destinations in the country. The most famous ones include Borobudur and Prambanan in Central Java and Muara Takus in Sumatra.
— Eleven

Indonesia’s Rights Struggle: Deciding Which Candidate Is the ‘Lesser Evil’
Intellasia East Asia News A debate showed that neither candidate in Indonesia’s presidential race has any plans to address human-rights abuses. Standing on a stage in the Hotel Bidakara’s ballroom in downtown Jakarta during a presidential debate, Indonesia’s incumbent leader, Joko Widodo, meekly defended what has been, at best, a checkered record on human rights. Widodo, popularly known simply […]
— Intellasia

Direct flights to Indonesia to start
Industry insiders believe direct flights could commence between Cambodia and Indonesia this year, as long running suggestions that the countries will boost their air connections look set to finally come to fruition.
— The Phnom Penh Post