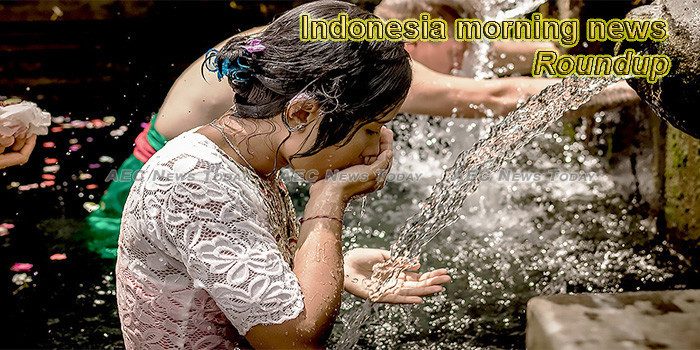 Quarantine inspections tightened as agricultural trade booms
The growing trade in cattle and crops following trade agreements with several economies has increased the risk of diseases spreading across country borders.
— The Jakarta Post

‘One fish at a time’: Indonesia lands remarkable victory
Indonesia, the world’s largest tuna fishing nation, has pulled out all the stops in recent years to transform the health of an industry blighted by depleted stocks and illegal poaching.
— The Guardian

Is higher pay the way to fix Indonesia’s corruption problem?
Indonesia’s National Police chief General Tito Karnavian announced recently that police officers’ allowances would be increased by up to 70 per cent and that raised the question of whether a higher pay may help fix Indonesia’s graft problem.
— The Nation (very annoying pop-ups)

BPS Reports Slight Drop on Indonesia’s Poverty Rate
The Central Statistics Agency (BPS) recorded a slight drop in the poverty rate from 9.86 percent to 9.66 percent which translates to 25.67 million people living in poverty compared to the previous statistic of 25.95 percent.
— Tempo.co

Christians in Indonesia appeal for “tolerance” as protesters mob church
A group of neighbours forced their way into a house in the North Sumatran capital of Medan on Sunday 13 January protesting that it was being used as an “illegal” church.
— Barnabas Fund

Sri Mulyani’s experience makes her ‘perfect’ fit for World Bank top job
Several names have been mentioned as potential candidates to replace World Bank President Jim Yong Kim, who is set to step down from the position in February, and Indonesia’s source of pride, Finance Minister Sri Mulyani Indrawati, is one of them.
— The Jakarta Post

Tsunami Could Hit NYIA Airport in Yogyakarta: BPPT
A tsunami researcher from the Assessment and Application of Technology Agency (BPPT), Widjo Kongko, said that a tsunami at a height of 10-15 meters has a potential to strike New Yogyakarta International Airport or NYIA in Kulon Progo, Yogyakarta.
— Tempo.co

New BNPB head wants TNI to guard disaster warning devices
A string of deadly tsunamis and earthquakes that devastated Indonesia last year has served as a wake-up call for the government to go the extra mile in improving risk management and early warning systems in the disaster-prone country.
— The Jakarta Post

Govt lowers investment in oil, gas downstream business
The Energy and Mineral Resources Ministry has lowered its investment target in the downstream oil and gas business – pipeline projects, manufacturing facilities and fuel-storage facilities — this year as the ministry failed to achieve its target in the last two years.
— The Jakarta Post

Sluggish global economy to hamper realization of export target: BPS
The sluggish global economy and fluctuations in prices of some commodities might hinder efforts to achieve the 2019 target of non-oil and gas export growth of 7.5 percent, Indonesia`s Central Bureau of Statistics (BPS) …
— Antara News

Man nabbed in Indonesia for allegedly slaughtering, cooking hornbill
The authorities in Riau have arrested a man allegedly involved in illegal poaching after he posted a video of himself slaughtering an endangered bird on social media.
— The Straits Times

‘Keluarga Cemara’ hits million-viewer mark
Since its Jan. 3 premiere, 1,035,634 people have seen Keluarga Cemara (Cemara’s Family) in theaters according to data from filmindonesia.or.id.
— The Jakarta Post

West Jakarta school lab used to store illegal drugs
Police claim that alleged drug dealers have been using a laboratory in a school in West Jakarta to hide their illegal wares.
— The Jakarta Post

North Sumatra durian penetrates global market in delicious ice cream
When you stop by at top shopping malls or other culinary centers in Singapore, South Korea, Australia or Japan and pick durian ice cream — favorite dessert for many because of its unique state and smell — you may never think that its basic ingredient was in fact exported from North Sumatra.
— The Jakarta Post

Government criticized as soft on tobacco industry
SHARESSmoking has long been a habit in Indonesia that does not only involve adults but also affects minors, including elementary school students, and has led to swelling healthcare spending for smoking-related diseases. However, policy makers are reluctant to address the issue and are defending the cigarette business, critics say.
— The Jakarta Post