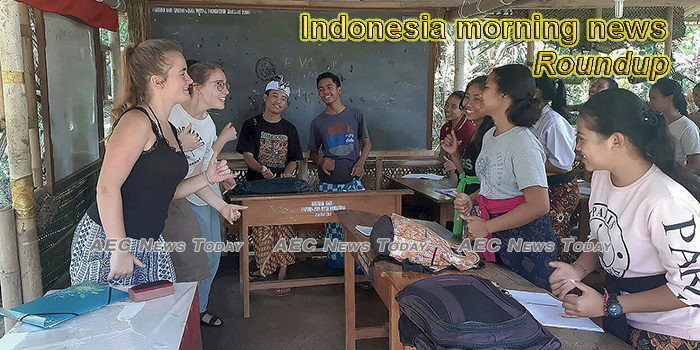 Garuda Indonesia president director fired after smuggled bikes found on plane
State-owned Enterprises (SOEs) Minister Erick Thohir has said he will fire the president director of flag-carrier Garuda Indonesia, Ari Askhara, following the discovery of a disassembled Harley Davidson motorcycle and Brompton folding bicycles smuggled on board a new Airbus A330-900 plane being delivered to the airline.
— The Jakarta Post

Online storefronts now required to have business permit, prioritize local products
President Joko “Jokowi” Widodo has issued a regulation that requires online storefronts to apply for an official business permit from the government, among other things, in an effort to bolster the country’s e-commerce ecosystem.
— The Jakarta Post

Indonesia Preps $40 Billion for a Metro to Rival Singapore’s
Indonesia is preparing to spend about $40 billion to extend Jakarta’s metro network, a bigger-than-expected outlay that’s poised to boost the country’s construction companies and reignite a rivalry between China and Japan over building the project.
— Bloomberg

Indonesia More Vulnerable Today Than During Last Global Downturn: Report
Indonesian top business executives must take significant actions to deal with an anticipated global downturn if they want to emerge as winners, since the country is more vulnerable now than during the last crisis a decade ago, a report released on Thursday said.
— Jakarta Globe

Indonesia calls CNN report on palm oil-driven deforestation ‘absurd’
The Indonesian government has criticized a CNN International special report that said the world’s demand for palm oil ignited a climate bomb not only in the country but also in the world.
— The Jakarta Post

Hopes of US-China detente pushes Indonesian crude prices higher
Indonesian crude oil prices reached US$63.26 per barrel in November, the highest figure since May, mainly driven by market optimism for a cool down in the United States-China trade frictions.
— The Jakarta Post

Liberalization at what cost? Observers raise concerns over sustainability of investments
Environmentalists and development planners are raising their voice over the government’s plan to scrap the requirement for building permits (IMB) and environmental impact analyses (Amdal) as part of President Joko “Jokowi” Widodo’s deregulations efforts to up the economy and attract investments.
— The Jakarta Post

Police officers accused of sexually harassing prisoner in Papua
Papua Police chief Insp. Gen. Paulus Waterpauw has confirmed that two police officers are under investigation for alleged sexual harassment of a woman prisoner at the Papua Police headquarters in Jayapura.
— The Jakarta Post

Another Break in the Wall
A crack was identified on the Muara Baru National Capital Integrated Coastal Development (NCICD) sea embankment in North Jakarta on Wednesday.
— Jakarta Globe

Spotlight on teachers as Indonesian student competence worsens
Indonesia’s declining scores in a recent global education quality survey has raised doubts about whether the country would be able to take full advantage of its highly flaunted demographic bonus, which was supposed to provide an abundance of young and productive people in the next decade.
— The Jakarta Post

Economy key as Indonesia raises sails in South Pacific
The South Pacific Ocean has become a focal point of Indonesia’s economic and development diplomacy, with the nation’s top diplomat meeting with counterparts from the region that is fast becoming a battleground for influence among the world’s superpowers.
— The Jakarta Post

Indonesia wins paper dispute at WTO
The Dispute Panel at the World Trade Organization (WTO) decided in favor of Indonesia that had filed a lawsuit against Australia for adopting the Anti-Dumping Entry Policy (BMAD) on Indonesian A4 copy paper products (DS529).
— Antara News

Storms ahead: Indonesia braces for more extreme rainy season
As the rainy season starts in several regions around the country, the government is bracing for possible hydrological disasters. The rainy season is predicted to become more disastrous as climate change makes the weather more unpredictable.
— The Jakarta Post

Councilors not much ado about nixed overseas trip quota, says won’t loosen city’s belt
Amid the City Legislative Council’s efforts to keep next year’s budget trim as part of its efficiency drive, Governor Anies Baswedan has issued a regulation that amends the fixed quota for official overseas trips with a needs-based criteria.
— The Jakarta Post

Challenges remain as Indonesia gains ground in green development
Green development in Indonesia presently covers 25 million square meters, or about 5.7 times the area of Vatican City, thanks to significant progress made by Jakarta and Bandung in pioneering green building codes, says a recently released report, but challenges await further progress.
— The Jakarta Post

On the right track: MRT line to expand to Rawa Buntu
The central government has put forward a plan to expand the MRT Jakarta line to reach Rawa Buntu in Serpong, South Tangerang, Banten, some 27 kilometers from Lebak Bulus, South Jakarta, where the MRT’s first station and depot are located.
— The Jakarta Post

Save it for a rainy day: Thousands of infiltration wells built in Greater Jakarta to hold floodwater
Extensive development in Greater Jakarta has caused swaths of land to subside and has undermined the ground’s ability to hold water.
— The Jakarta Post

Market Segment Expansion Key for Fintech’s Survival
Market segment expansion is key for financial technology, or fintech, companies to survive in Indonesia, a practitioner in the sector said on Wednesday.
— Jakarta Globe

Hartono brothers top ‘Forbes Indonesia’ list of 50 wealthiest Indonesians
Forbes Indonesia released its list of the 50 richest Indonesians on Thursday, showing that a large portion of the country’s wealth is still controlled by the old guards of various industries and legacy conglomerates.
— The Jakarta Post

‘In the Name of Belief’: Indonesia embraces indigenous religious education
“In the name of the Father, the Son and the Holy Spirit. Amen.” This was the phrase that Retno Lestani uttered as she made the sign of the cross decades ago, when she had taken Catholicism as a school subject.
— The Jakarta Post

Walls close in on Garuda Indonesia as flag carrier deals with blunders
Following years of a sterling reputation and unparalleled prestige in the country’s airline industry, national flag carrier Garuda Indonesia has now been made to face the cracks in its usually polished armor as the government and the public alike begin to scrutinize the airline after a string of managerial misfires over the past year.
— The Jakarta Post

Rape child victim in South Jakarta gets assistance, more needs to be done
Neighborhood Unit 05 of the Manggarai subdistrict is just like most kampung in Jakarta with houses built face-to-face and wall-to-wall in narrow alleys.
— The Jakarta Post

Police in Depok arrest alleged breast groper who said he did it to ‘satisfy his urge’
Police yesterday arrested a 35-year-old man named Riyan Apriyanto who allegedly groped a woman’s breasts while she was walking alone in the city of Depok in September.
— Coconuts (paywall)