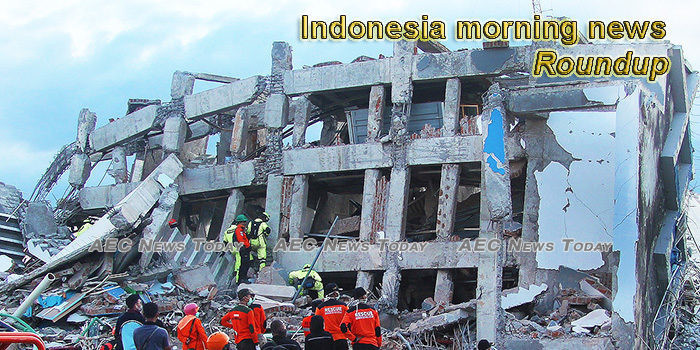 BI to cut rate by 50 bps in 2020: Fitch Solutions
Bank Indonesia (BI) will further slash the nation’s benchmark interest rate by 50 basis points (bps) in 2020 to stoke economic growth amid weak domestic demand that had been dragged down by a slowdown in investment, according to projections by Fitch Solutions Macro Research.
— The Jakarta Post

Government may save $1.2 billlion foreign exchange from TPPI refinary
The Indonesian government has set itself the target of saving up to US$1.2 billion in foreign exchange per year after its stake in PT Trans-Pacific Petrochemical Indotama (TPPI) rose to 80 percent based on an agreement signed on Friday (Dec 20, 2019).
— Antara News

Activists warn about impact of new capital development on orangutans
The plan to move Indonesia’s capital city to Kalimantan island will take a toll on the population of critically endangered wild orangutans living on the island, environmental activists warn.
— The Jakarta Post

Two Indonesian Hostages Rescued in Philippines, Another Remains at Large
Two Indonesian hostages held by a militant group in the Philippines were rescued alive on Sunday morning after 90 days in captivity, following a military operation that left one soldier dead, the Indonesian Foreign Affairs Ministry said.
— Jakarta Globe

Lawyers at Indonesian palm oil agency up to bat against EU
Indonesia’s palm oil fund agency has used up Rp 37.7 billion (US$2.7 million) in “promotions” this year, which includes paychecks for advocates, amid the country’s lawsuit against the European Union at the World Trade Organization.
— The Jakarta Post

Miracle survivor on mission to help close gaps in tsunami warning system
Arif Munandar had been pronounced dead before he woke up in a body bag four days after a monstrous wave swept his village in Indonesia’s northern Aceh province 15 years ago.
— Reuters

Bootlegged: Indonesians love to stream movies illegally, survey says
Amid the boom of online entertainment streaming services, the majority of online consumers in Indonesia favor watching movies for free through illegal websites, in which streaming site indoXXI has become a popular option, according to a recent survey.
— The Jakarta Post

New KPK Boss Not Interested in ‘Noisy Graft Busts’
Newly-appointed Corruption Eradication Commission (KPK) Chairman Firli Bahuri said he was not interested in making a big fuss over the commission’s graft busts and that he would rather take preventive measures involving all elements of the society.
— Jakarta Globe

Year ends but mental health awareness continues
Shortness of breath, disrupted vision, trembling, and a rapid heart rate are among the most common physical manifestations of irrational fear at its peak.
— Antara News

Indonesia grows muscles as arms manufacturer
While modernizing its weaponry system, the country’s defense industry has become a competitive producer of weapons and military vehicles, as seen in the surge of exports.
— The Jakarta Post

River cleanup met with mixed reaction as scavengers lose source of income
People living in a number of areas of Tangerang regency, Banten might be breathing a little easier, as the local administration has helped clear the Cisadane River of piles of trash.
— The Jakarta Post

Study highlights vulnerability of Salafi ‘pesantren’ to radicalism
As a Muslim majority country, Indonesia is home to more than 28,000 pesantren (Islamic boarding schools), which have produced many bright thinkers, politicians and even a president.
— The Jakarta Post

TNI HQ confirms no additional deployment of troops in Papua
The National Defense Forces (TNI) Headquarters does not intend to dispatch additional troops to Papua Province after an exchange of fire with the armed criminal group on Tuesday (Dec 17) that killed its two soldiers.
— Antara News

Tough Veteran Judges Among Members of KPK’s Maiden Oversight Body
The first-ever oversight body of the Corruption Eradication Commission, or KPK, was inaugurated on Friday, with two veteran judges known for their courtroom firmness and courage named members along with legal experts and a former KPK chairman.
— Jakarta Globe

Indonesia taps into online courses to upskill workforce
The government is planning to develop more online vocational courses in an effort to boost the competency of Indonesian workers, particularly those living in rural areas.
— The Jakarta Post

Police to Announce Result of Novel Baswedan Case at Year’s End
National Police spokesman Brig. Gen. Argo Yuwono said that the Police will announce findings related to the attack against senior investigator of the Corruption Eradication Commission (KPK) Novel Baswedan at the end of this year.
— Tempo.co

Viral flag bearer stands trial, court’s website hacked
Dede Luthfi Alfiandi, 20, whose photo clutching an Indonesian flag to his face has become an emblem of September’s student protests over controversial bills in the House of Representatives, is currently standing trial at the Central Jakarta District Court.
— The Jakarta Post

City prepares new collection to revive Maritime Museum in 2020 after fire
A group of enthusiastic tourists visited the Maritime Museum on Jl. Pasarikan, North Jakarta, recently to learn about the grand history of Indonesia’s maritime activities.
— The Jakarta Post

Muslim-Buddhist Dialogue in Jakarta Offers Strategies to Improve Interreligious Relations
A workshop was held in Jakarta this week to find a way to ease tension and solve conflicts between Muslim and Buddhist communities in South and Southeast Asia, attended by experts and Muslims and Buddhists from five countries in the regions.
— Jakarta Globe

Locals seek inclusion in Likupang development
It did not take a long for people living in Likupang in North Minahasa, North Sulawesi, to learn the news about the government’s plan to make their home a popular tourist destination.
— The Jakarta Post

Preachers call on men’s involvement in reducing maternal, infant mortality
One Sunday morning, preacher Tri Prasetyaningsih shared a rather depressing story about mothers with the congregation of the Indonesian Christian Church in Klaten, Central Java.
— The Jakarta Post

Don’t let it ‘undermine our faith’: Church group says of Netflix ‘gay Jesus’ film
A new Portuguese-language Netflix comedy The First Temptation of Christ has made world headlines after sparking controversy and anger for depicting Jesus Christ as a gay man.
— The Jakarta Post

Indonesian woman arrested after she allegedly stomped her husband in the crotch until he fainted
Police in the Indonesian regency of Probolinggo, East Java arrested a woman on suspicion of domestic violence, which allegedly involved her inflicting physical damage to her husband where it really hurt.
— Coconuts (paywall)