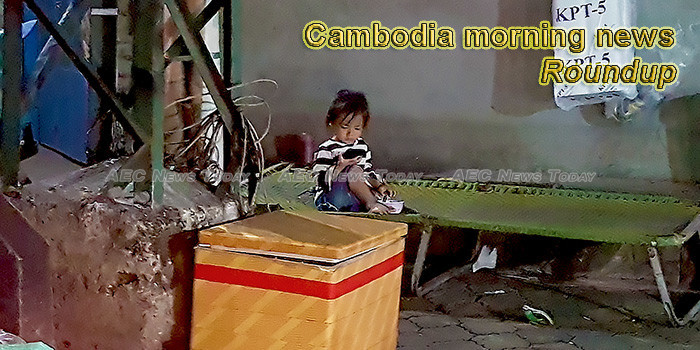 ADB approves $7.6 million loan for solar
In a bid to promote the development of renewable energies in the Kingdom, the Asian Development Bank (ADB) on Friday approved a $7.64-million loan to support the construction of a 100-megawatt solar power park in Kampong Chhnang.
— Khmer Times

NEC: Voter Turnout Rate Is 99.94 Percent
About 99.94 percent of the 11,572 eligible voters cast their ballots during the 3rd Election of Capital, Provincial, Municipal, District and Khan Councils held across the country on May 26.
— Agence Kampuchea Presse

Cambodia proposes new tourism package
The Ministry of Tourism has proposed the creation of special packages that bundle up trips to Sihanoukville by cruise and flights from there to Siem Reap.
— Bangkok Post

NEC Announces Smooth Process of 3rd Mandate Council Election
The National Election Committee (NEC) has made public a press release on the general situation of the election and ballot counting process of the third Election of Capital, Provincial, Municipal, District and Khan Councils.
— Agence Kampuchea Presse

Tourism board mulling fresh tourism strategy
Cambodia Tourism Marketing and Promotion Board, a joint institution between the government and the private sector, is studying a new strategy to attract more foreign visitors to the Kingdom, Minister of Tourism Thong Khon said.
— The Phnom Penh Post

City’s tallest Gold Tower 42 property sales begin in June
The Gold Tower 42 will launch the sales of its properties in June this year, about a year before the completion of the building, which is considered the tallest structure in the capital, at least for the moment.
— The Phnom Penh Post

Hun Sen set to attend Unescap summit in Bangkok, says ministry
Prime Minister Hun Sen will travel to Bangkok, Thailand, on May 27 to attend the 75th Session of the United Nations Economic and Social Commission for Asia and the Pacific (Unescap), under the theme Empowering People and Ensuring Inclusiveness and Equality.
— The Phnom Penh Post

Licence deadline extended
The deadline for tuk-tuk drivers and riders of motorbikes with engine capacity above 125cc to hold valid licences or face fines has been pushed to August, a senior official at the Ministry of Public Works and Transport said on Thursday.
— The Phnom Penh Post

Health department publishes index of unlicensed nurses
The Svay Rieng Provincial Health Department yesterday issued a list of nearly 400 names of people who are not permitted to work in the health sector.
— Khmer Times

China to continue opening market: Chinese official
The Vice Minister of the Communist Party of China’s International Department, who is now in the Kingdom in an official visit, has pledged to further open the Chinese market to Cambodian products and work to attract more investors.
— Khmer Times

Phnom Penh gov’t warns of fines on improper garbage disposal
The Phnom Penh Municipal Department of Environment on Thursday warned it would start imposing fines on residents who fail to dispose of rubbish properly after a campaign to raise public awareness about the law and the environment ends.
— The Phnom Penh Post

Cambodian Who Rapped Against Social Injustice Under Surveillance, Fears for Safety
A Cambodian rap artist whose song about social injustice has gone viral said Friday that he is under heavy surveillance by authorities and fears for his safety.
— Radio Free Asia

Ministry wants more disabled people employed
The Social Affairs Ministry has urged its officials to train and employ more people with disabilities in a bid to improve their living conditions.
— Khmer Times

Vietnamese, Cambodian localities enhance mutual support
The Border Guard High Command of the southwestern province of Tay Ninh on May 25 presented fuel serving border patrol to the police department of Cambodia’s Tbong Khmum province as part of the bilateral cooperation to fight crime along the border.
— Vietnamplus

Woman charged over murder of son-in-law
Phnom Penh Municipal Court yesterday charged a mother and her daughter over the murder of the latter’s husband in Sen Sok district.
— Khmer Times